The day after and I just managed to have a couple of ales again.
It was a big day out indeed.
We had a really good turnout with about 17 members.
The order of pubs got changed a little near the end, but all but the Lord Nelson (closed for a private function) were visted.

Pumpy has a bunch of pics that he'll get to me tomorrow. I have a few to get off my camera also.

A big thanks to everyone that made the effort to come along, Redbeard for printing the maps out, Gerard for making the effort to come into the MacQuarie (and leaving his sick family at home), the guys from Newcastle and the Central Coast (now thats commitment) and everyone for just being tops guys.
Lots of beer and brew talk. :beerbang:

They wouldn't let you in the Lord Nelson hey? Must have been a fun night.

Thanks again Doc for organising a top night , I have never tried so many different high quality beers,A great bunch of blokes to have a night out with .
I was inspired ,I must confess to never drinking a Hoegaarden or a Leffe Radieuse . what have I been missing in life!!! .
a couple of Berrocas and all OK this morning just got on the Vienna lager .

On the kiddie train from the Pumphouse to the James Squire Brewhouse. The train did really well to hold us all in and still get there :lol:

I don't recall all the names so don't want to offend by getting them wrong. I'll let someone else do the identification 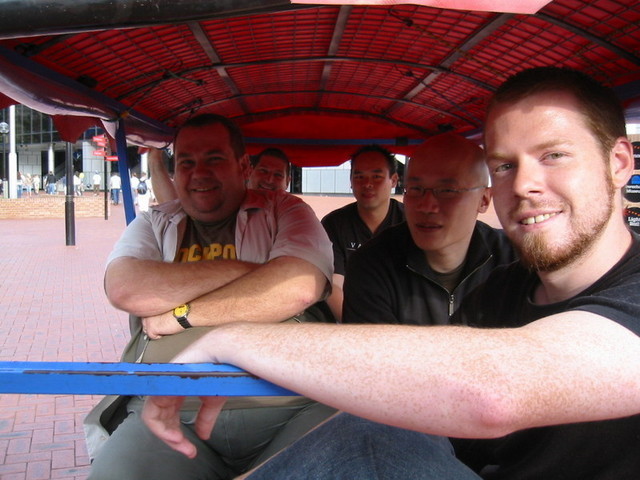 Still on the kiddie train looking in the other direction.
Pumpy and Shed. 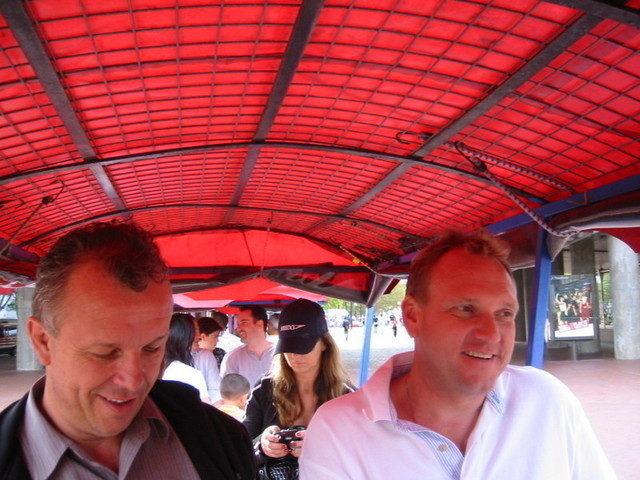 Hey fellas, yes a great night was had by all. Thanks to everyone that came. We will have to make it an annual event. I ended up in that private function at the Lord Nelson on my way back to my truck, only lasted a few minutes before being escorted out by security. Got some cake though. Woke up great this morning outside the Lord Nelson with 2 Pint glasses next to me.

Business for the RedOak definitely picked up when we arrived :lol: 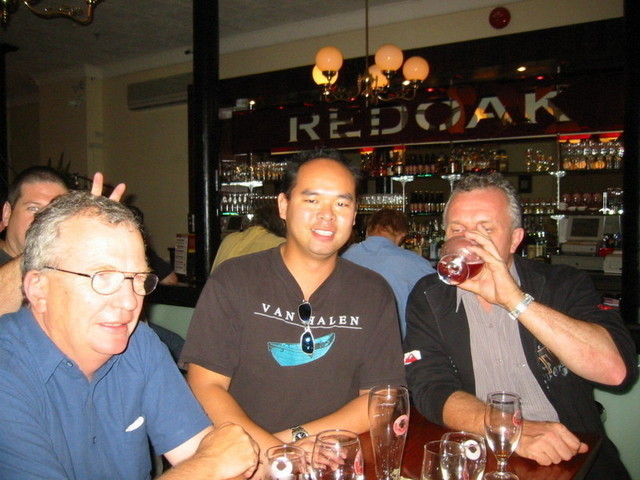 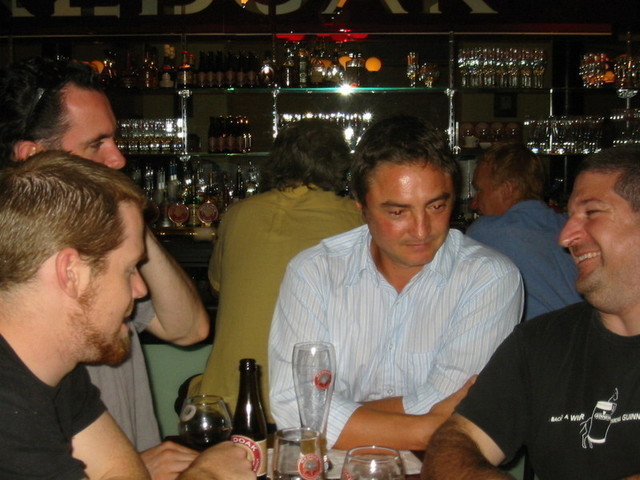 Got back to Newcastle @ about 4:30 this morning. We were 2 late for the midnight train, and had to wait until the 1:47 train. Not much sleeping on the train as we had 2 lots of ticket inspectors, and some drunk looney uni student decided to sit with me and Big Stu and tell us about all his issues. He got another bonus problem when he coldn't produce his concession pass to justify his cheap ticket. He realised then that his wallet was gone and that he was gonna get a $200 fine on top of all his woes.
Then 2 other young couples were having a screaming match. The issues were a lack of respect and "where's his wedding ring?". Not the best journey home.

BTW, Duncan bought himself a middy at the Australian and shot through surreptitiously. Poor form, and a beercrime too!

I got 3 hours kip @ Stu's house and then drove home (40 min) for a shower, some brekky. Then off for a 55min drive with my family to attend an engagement party for one of my cousins. So I had a megaswill (shame :blink: ) B4 midday with the rellos.

I think the Lord Nelson was using a ploy to exclude people. I spoke with the bouncers there on a previous occasion, and they can be very selective with their clientele. It's prob quite easy to fill the place. I really doubt that someone had enough cash to fund a private function.
Isn't the term "pub" an abbreviation of public drinking house? Surely our exclusion from the premises was a restrictive business practice, and prob in breach of "Public Houses" legislation!

BTW Doc, the Speculator we tasted at the JS Brewhouse may well have been all Amarillo, or substantially so (I know U could detect Cascade)... Coz my all-Amarillo APA has the same flavours as the JS beer (on my palate).

Party on AHB'ers, and thanks for the excellent Birthday celebration ( I turned 41 last Thurs).

Great to see everybody survived intact. A points victory to Todd for getting into the Lord & getting cake. Well done.
I would have loved to stay on at least for the train ride, but I still have almost all of my brownie points available, think I will use some for a trip to Prague.
No not that one. There was a write up in the Sun Herald about a bar in Kellett St in Kings Cross named Prague. Zlatopramen $4.40 per 500ml,$3.90 for Budvar Budejovicky. Should be worth a look. Might try starting a pub crawl through the Cross for the AHB guys!
Cheers
Gerard

before anyone asks, no relation, but maybe a part of the growing - home brew led - bruvolution

Yep was a great day and good to put some faces to some names.
Can't fault a day where you spend most of the day drinking and never have any beer more than once!

I think my favourite beer yesterday was either the schwartz at the Mac or the Craic at JS,.... or the Leffe Brune....

I think the LCPA tasted nicer on tap than out of the bottle but my taste buds weren't all that fresh by then...
same with the mountain goat.... I've only had it tap once down in Melbourne and only out of the bottle up here and was looking forward to it but I think I'll need to go back and drink it again with less of a cocktail of beers in me beforehand

Thanks to everyone for a top day out

Funny. I do that all the time.

Sounds like a bloody good... period of time. I wish we could do something like that in Brisbane (not for the lack of numbers, but the lack of pubs).
S

An excellent day/evening.
It was great to meet up an match a few names to faces.
Got home at 1:30 after catching the last Manly ferry, then missed the last bus and ended up walking about 5km home (All the taxis were going the other way)

I was a bit dissapointed not getting into the Lord Nelson, was looking forward to trying the Nelsons blood, but hey ... private function!

Glad to hear you survived the night in the truck Crusher, after the double murder down there the night before!

The Lowenbrau and the Australian hotel were the best pubs in my opinion, great atmosphere and decent beers at reasonable prices.
Readoak and the Belgian cafe were a bit expensive, or am I just a tight arse? ( It hurts to pay $10 for a 250ml beer.. not even a middy!)

I had a great time, and I'm in for the next one.

The Newcastle contingent getting some food in at the Porterhouse (first stop).
WeizeGuy in the middle.

Still at the Porterhouse with Redbeard on the left.

Second stop, the MacQuaire. Upstairs by the lagering tanks.

Downstairs at the MacQuarie, outside the brewroom. Crusher daydreaming.

Down at the Pumphouse.
The bar girl didn't know what the hell had happened when 17 guys all come in and ordered a half pint each of the Thunderbolt.

The usual suspects still at the Pumphouse.

At the Australian. Getting on in the day, time for a food stop and glimpses of the Super12 action between NSW and the Brumbies. 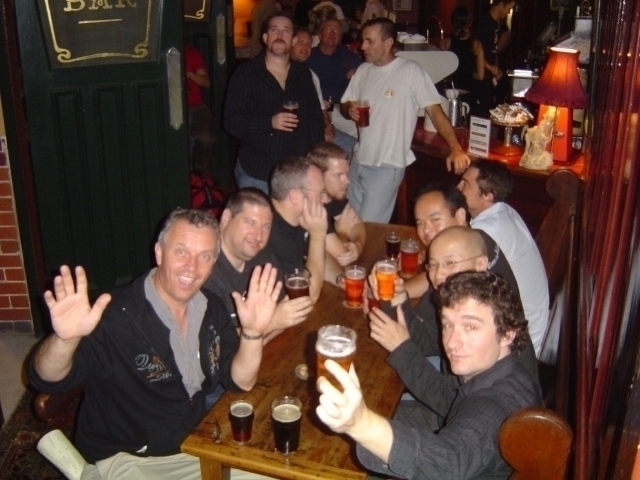 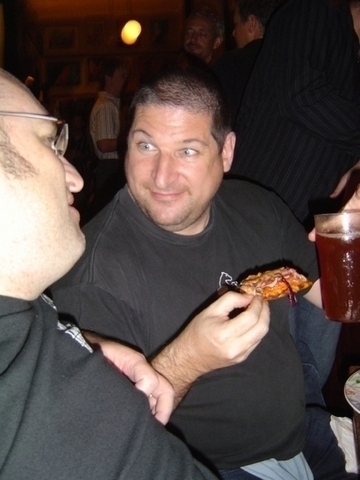