Using An Esky As A Mash Tun

Hey all,
I'm currently mashing with a 19L pot on the stove and lautering with a 20L bucket which works a treat but i'm looking to upgrade to a cooler. Do people use the coolers to mash as well as lauter, and adjust the temperature by adding hot/cold water? Does the temperature of the grist drop much over the 90min period for a single step infusion? What type of water to grain ratios are generally used, ie what size cooler would i require?

Eskys are ideal mash/lauter tuns. Yes you can add hot water infusions. Temp drops are minimal. Get as large a size as you can to allow for future upgrades. L/G ratios vary between 2 lt per kg up to 3 lt per kg.

Good idea would be to key Esky or Cooler into the search bar. There's a boatload of info available.

Dazzling said:
Hey all,
I'm currently mashing with a 19L pot on the stove and lautering with a 20L bucket which works a treat but i'm looking to upgrade to a cooler. Do people use the coolers to mash as well as lauter, and adjust the temperature by adding hot/cold water? Does the temperature of the grist drop much over the 90min period for a single step infusion? What type of water to grain ratios are generally used, ie what size cooler would i require?

I use a 10 Gallon Rubbermaid cylindrical cooler and its great for mash/lautering. I lose about 1 degree over the 60 minute mash, if any. Mind you, if the missus knew I was "stinking up the kitchen" as she delightfully puts it, I'd probably lose a few more degrees outside - it was minus 3 outside last night h34r:

Have a look here for a great illustrated article on infusion mash brewing using a cooler. This is very similar to what I have at home and it works well (IMHO). You can get all the mash gear bits you need (other than the cylindrical cooler) from Bunnings...
Cheers,
TL
S

There is some stuff at http://brewiki.org/BatchSparge

I use a 36l round keep cold cooler.

Excellent unit. Perfect size and already has the hole for the tap so you just put in some parts you can pick up from the local plumbing supply for tap and manifold.

I got my keep cold cooler and advice on how to put it all together with manifold from Dave at Goliath. Works great.

This is the item in question Dazzling. One of the best investments you'll make in your brewery. :super: 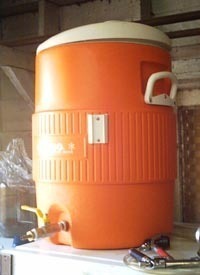 And here is my beautiful baby.
Oh the joy! 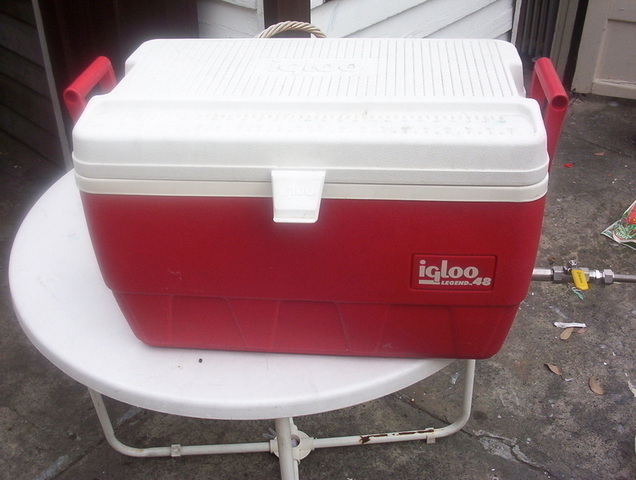 I can vouch for the Keep Cold as well. Added an easy hooker and a new tap. Very little temp drop (maybe a degree or 2). Grumpy's sell them but you may be able to source them cheaper through Ranger Camping
N

I have a Keep Cold with a brass phallic tap like Warrens. I find a blanket or since we purchased a petrol drinking thing that had surplus sheep skin car seat covers (the minister is vegan) ,covering the the mash tun keeps the temp at even temp. The sheep skin gets warm, so you know it makes sense.

nonicman said:
I have a Keep Cold with a brass phallic tap like Warrens.

Thanks for the tips blokes. Is there anyone in Mlebourne that could recommend where to get a good sized round cooler? Otherwise I'll go the rectangular.

Dazzling,
I don't know if this is any help but I picked up a 35ltr rectangular cooler at my local Go-Lo store yesterday for $15.00 on special. It has a drain plug in the bottom that is easily removed to put in a tap. I put about 10ltrs hot water in it (60 deg) yesterday afternoon to see how well it insulates and it was still at 55 deg 3hrs later.

They had two sizes I went the bigger of the two.
around $100

Dazzling said:
Thanks for the tips blokes. Is there anyone in Mlebourne that could recommend where to get a good sized round cooler? Otherwise I'll go the rectangular.

Hi Dazzling,
I just saw a 45 litre Rubbernmaid 3 piece pack with the extra little esky and cold water jug for $75. And the Rubbermaid 51 litre 3 piece pack for $80.
Both of these were the rectangular ones.
In Mitchell? outdoors, Russell St Melb.
No affiliation etc.

Got mine from BBQs Galore Northland. Paid a highly-inflated $140.

That was 5 years ago. Don't think they stock them anymore IIRC. Anyway you can do a lot cheaper these days. Aussie Disposals and Mitchells have other brands at better prices.

Check this thread the Qld. blokes had going. They were getting a pretty good deal on theirs.

Dazzling, the round coolers give you a deeper grain bed, and they are good if you want to try fly sparging. You will make good beer in either.
S

Does anyone know where you can get either the Igloo ice cube or the RubberMaid
coolers in Tassie ? I've searched heaps of camping/hardware stores and nobody
seen a round cooler before...

Hope this isn't too much of a hijack, but I've got a 44L rectangular esky that I plan to make into a mash lauter tun. I realise that this will have issues with grain bed depth, but could an experienced person please explain the issues with a thin grain bed? I'm a little worried about it.

I plan to batch sparge.
G

From the word according to John Palmer:

"The grainbed can be a few inches to a couple feet deep, but the optimum depth depends on the overall tun geometry as well as the total amount of grain being mashed. A good rule of thumb is: "The depth of the grainbed should be no less than one half the shortest dimension of the floor area, nor greater than twice the longest." In other words, the grainbed aspect ratio can vary between 1:2 and 2:1. If the grainbed gets too shallow, i.e., from lautering too little grain in too large a tun, then an adequate filter bed won't form, the wort will not clear, and you will probably get hazy beer. A minimum useful depth is probably about 4 inches but a depth of between 8-18 inches is preferable. In general, deeper is better, but if it is too deep, then the grainbed is more easily compacted and may not let any wort through, making lautering nearly impossible."

In my experience with a 47 litre esky mash tun, I don't have any problems so long as I keep my grain bill over 4kgs minimum. I have access to a smaller 5gal round tun if I want to make lighter gravity beers than around 1038OG. 4kgs+ though and no probs.