A stout - afraid to bottle it - HELP

Wanna bottle now but I am afraid to do it and here is why:

What I used and how:

I used the MAXI BIAB and NO CHILL method to gain 23 L of wort.

Boiled for an hour and a half, adding Sparge water when it evaporated, with hop addition at pre-mentioned times.
Left it over night on a cold tile floor to cool down.

After 12 hours it was bubbling like crazy. After 36 hours the bubbles dropped down to one bubble every 4-5 minutes.

I have sanitised everything...freak on those matters.
Reading through on-line and offline books I've realised I have underpitched yeast.
The taste of it is very nice and there are no off smells.

So, again I did something crazy.
48 hours after second SAME reading on hydrometer I transferred it to a second fermenter,
I took 2 liters of this wort, boiled it, added cca 600-700g !!!! (21-24 oz) of castor sugar and when it cooled to 20C/68F I pitched a new pack of the same yeast.
Waited 24 hours again and pitched that in what I think was Stuck Fermentation Wort.

24 hours later it was bubbling "normally" like I saw on many You-tube videos. and it was doing so for the next 5 days.
I took a reading when it stopped completely (NO BUBBLES WHAT SO EVER) and it said 1.040 at 20C/68F.

Here is the I AM AFRAID part.
From what I read I should wait until the reading goes down to 1.015 or something.
Of course, that is not the issue with beers with high starting gravity but mine is not that.
Or is it?
When I press on the lid of the second fermenter it gives off a lot of bubbles through the airlock and it springs back into place.

Took multiple refractometer readings and hydrometer reading and they are no where near the same.
Wanted to calibrate my refractometer but where I live currently I can not find destilled water.
In the pharmacy when I asked for it the lady sold me sterilised water (did not realise until I got home).

1.Should I bottle...or wait longer...or throw away?
I have no Keg option, only bottles.

2.Should I (and will it make a difference) put it in the basement where the temp is cca
12C/53.6F in the second fermenter and leave more for some time?

3.Should I leave it where it is now for a certain period more?

4.If there is no chance of bottling it, can I drink it as is?
Taste is darn good even without bubbles.
I already made a sourdough starter with some of it and the bread turned out amazing.

Do a Fast Ferment test.

whatt is the reading from your hydrometer? thats what you shpuld be going by. 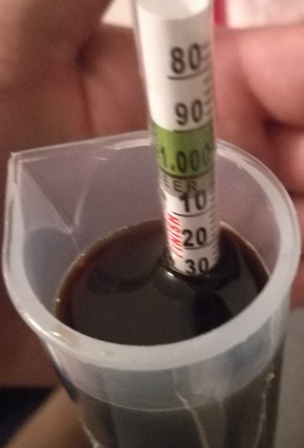 Measured an hour ago

Hey Melver,
just did some quick calcs in my head, which confirmed my suspicions after reading your mash procedure.
If you're throwing your Maltbill into 80°C water, the enzymes are not going to be happy at all. In fact, the ß-Amylase are pretty much going to be instantly f**ked. (Imagine if someone threw you into 80°C water..... you wouldn't be so pleased).

A big result of this is going to be a poor mash-efficiency....in other words: lots of unfermentables (especially with the roasted barley in there. I'm intrigued to hear your thoughts on using unmalted barley..? )
The results of this: a low OG and high FG.
Basically, a heap of longer-chained carbohydrates (Dextrines etc) that the yeast can't do anything with. Unforunately, no amount of lagering/conditioning is going to change this. Adding new sugars and fermenting them with give you addition alchohol, but won't affect the amount of unfermentables floating about in there.

Put it down to a learning experience

In terms of solutions, my advice would be as follows:
1. If you're convined it's finished fermenting, bottle it (with your usually technique for carbonating) and enjoy.
2. If you want to do something with all the unfermentables and are a fan of sourbeers, there are a few species that ferment longer chain sugars that usual beer yeasts can't process

Melver said:
So..brewed my first ever batch...no recipe...most of the rules ignored...
Click to expand...

Failing to plan is planning to fail, so they say.. don't worry, I did much the same thing when I first brewed a cider!

Good to see you documented your process but there's a reason brewers use same/similar steps to brew their beer. If not much of a reader then I suggest jumping on YouTube and watch some videos to learn from the varying processes. I started out watching this guy - https://www.youtube.com/channel/UCoAhRuxJb1K-d4BBSLNX1RQ - quick, easy, no nonsense and straight to the point for a beginner!

@keine_ahnung (I like the nickname)
I know all I did wrong. Well, I found out after.
Choosing Dark Munich which has very low diastatic power was just one of my first of many mistakes.

@Schikitar
I am much of a reader and I did investigate a lot, obviously not enough.
I have John Palmers 2 books, 53 bookmarked pages with a little bit of everything and some videos as well.
Any how, probably was too anxious and hasty, wanting to have a nice stout for Christmas.


Thank You all for good advices.

What I did now is I roused the secondary fermenter and it started to bubble again.
I'll see for how long that goes and if it helps to get it down by at least a point, I'll keep doing that until I come somewhere below 1.015.
Other option I am prepared to do is bottle it in PET bottles and then closely monitor it.

Can I put the fermenter in the basment at 12C/53.6 for a month?
The woman of the house wants to put a Christmas tree in the place of the fermenter

1) Before you even consider moving on to your second attempt at making a beer, I wouls strongly suggest that you do a bit more reading and learning, as there are a lot of things going wrong in what you've written above, which suggests that you were wholly unprepared for what you were doing.

2) Are you using your refractometer for your gravity readings now? You'll find that the reading from a refrac needs to be adjusted due to the presence of alcohol, if you're using it after fermentation has started. Try this.

3) For future reference, don't make a start for your yeast using sugar. It's not good for your yeast's health or performance once you then put it in to the wort, where the more complex sugars might give them trouble.

4) Your pre-boil and OG must be wrong. You can't go down in gravity if you boil, you can only go up, unless you add water after the boil. If your post-boil/pre-pitch gravity is off, it's probably because your wort was stratified - you need to make sure that you give it a good mix prior to taking sample pre-fermentation.

goatchop41 said:
You can't go down in gravity if you boil, you can only go up, unless you add water after the boil.
Click to expand...

Melver said:
Boiled for an hour and a half, adding Sparge water when it evaporated
Click to expand...

I'd be bottling in PET Plastic bottles with this one for sure! Would not risk glass bottle bombs.

I would tip it and start again, or you could add some enzymes to the fermenter. As it is that beer is going to be very sweet and not very alcoholic.

Next time, don't have your strike water above 75c, or you will kill the enzymes.

You don't need distilled water to calibrate the refractometer. The difference between distilled water and normal tap water is minimal and won't have a big impact on your readings. You do need to run your readings through a calculator after fermentation has started though, like the one on Brewers Friend.
Last edited: 17/12/18

Jesus christ this whole post is just a complete shitstorm. I completely missed this bit about the temp of the hydro reading at pre-boil. If that is the case, then when adjusted for temp, that would be about 1.063...

What were your volumes pre-boil and post boil?
When you said in your first post that you added water during the boil as it evaporated off, exactly how much did you add?

goatchop41 said:
exactly how much did you add?
Click to expand...

Melver said:
Sparge with 8 L and a second Sparge with 6 L.
Click to expand...

I think the 'pre boil' reading he took was actually the pre sparge reading because his pot is too small to do a full volume boil.
S

Melver said:
4.If there is no chance of bottling it, can I drink it as is?
Taste is darn good even without bubbles.
I already made a sourdough starter with some of it and the bread turned out amazing.
Click to expand...

If it tastes darn good to you of course you can drink it as is. And/or bottle it, preferably in PET as mentioned above to be on the safe side.

F
Bridging the carbonation gap (or the gap in my understanding!)

R
To bottle or not to bottle

Exploding Bottles. Fermentation not complete, earlier yeast or something wild?

L
Help! My trappist is like a fizzy drink!