Why's Your Brewery Named What It Is?

Got two batches fermenting well, and not 3 metres away from me right now :lol:

it's just an outside bathroom - i'll just jokingly refer to it as "the brewery" and forget about trying to trade mark it
cancel the 400,000 labels B)

Argh!!!! I don't believe it. A month or more ago I did various searches on this site for my planned 'brewery' name and they all came back with no results - so I went ahead and ordered the making of some signage for the top of my brew stand / brewery (pics soon).
What was my choice???
Well it started as - yes you've guessed it 'Doghouse Brewery' then the other half suggested 'Doghouse brews and we settled on "Dog'ouse Brews" so in went the order for signage.
Why this name? Well there's more dogs (3) than people (2) living in this house.
If there are no major objections I'll stick with this name but will change if the masses (you guys) indicate the need.
The signage is still being made (nothing is rushed here in the NT) so I'll be making some calls tomorrow to explore the possibility of job cancellation.
Bugger
Click to expand...

it's fine mate! you're in Darwin and I'm in Brisbane. If anyone asks we'll just tell them we're a chain brewery ie. "we have one in every state".

I need someone who is good at drawing to do a cartoon of a drunk sleeping in a snoopy-like kennel.

The Poolside Brewery because I brew on the back porch overlooking my pool. Eventually the plan is to have a shed connected to the pool area and serving beers out to the the masses who will throng to my entertainers paradise.

Coodgee said:
a drunk sleeping in a snoopy-like kennel.
Click to expand...

You can have it if you like it or keep looking if you dont. (Certainly dont feel obliged)

I tried to send it in a PM but couldnt.

wow! thanks, that's really cool. I've saved it onto my desktop. I'll print out a few and stick them on my kegs!!

I named my "Oasis Brewery" as it is a little haven amongst all the junk under the Queensland style house. 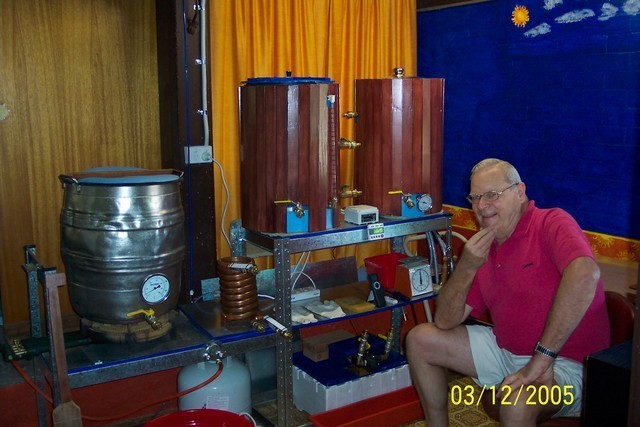 Great looking setup Peter!
Mine is pretty self explanatory... Last name is Lovern... I enjoy a good lager... So its Loverns' Lagerhouse.

I must admit I haven't named my backyard brewery and haven't had the inclination of doing so.
B

Named after my dog. A black 2 year old kelpie X Border collie. Got his name blue dog
when my wife gave him to me for xmas. He had a blue collar on.

Murray said:
I must admit I haven't named my backyard brewery and haven't had the inclination of doing so.
Click to expand...

I know exactly what u mean!

PS,and your signature cracks me up to.

I'm on the northern beaches of Sydney - guess where!

I think that's pigeon-German for "my house is the Balwyn Brewhouse".

My first 100+ brews were made in my house in Royal Ave, Bendigo, thus the Royal Bendigo Brewery. But now I live in Balwyn and I have just started brewing again after 2 years off. Being a rented house it's not ideal, whereas I own the house in Bendigo and was able to tailor it slightly - the old brick woodshed became the lagering room for long-necks, an old round-cornered fridge in the garage stored many a stubby and the double concrete wash-trough in the laundry could soak 2 doz bottles upright on one side elaving the other side for (Dog forbid), laundering clothes. Drag the old fridge into the outdoor laundry, plug it in and you have an instant party room with about 5 doz cold longs and 2 doz cold stubbs. Ahhh, the good old days.

2/ it's fine mate! you're in Darwin and I'm in Brisbane. If anyone asks we'll just tell them we're a chain brewery ie. "we have one in every state".
Click to expand...

Well if the reasoning in 1 is the way...then I should be a 'Doghouse Brewery' too (9 dogs and only 2 people)

Then according to 2 can I be the Sydney branch???

THis sounds like a "unique opportunity" guys. We should adopt each others breweries as "sister breweries" in the doghouse chain

what that means I don't know...

My girlfriend is heavily involved with alot of Japanese people as she works in the International English School business and has been involved with Japanese culture all her life. We have a Japanese rom mate and alot of Japanese people come to our house to visit. They are all amazed by the fact I brew my own all grain beer. Home brew is very uncommon in Japan, almost unheard of according to the ones I talk to. I've often thought about starting a little tourist business where I get 10 Jap business men (or whoever) to come and have a day brewing with me, sampling some brews and having some matched food. It could be a real money spinner but I bet the legalities would be a nightmare. Anyway, if we wanted to really dream, we could set up a doghouse brewery in each state and turn it into a mega money spinner and take over the world with export Doghouse Lagers and Ales into Asia

A long time ago (a few years, anyway) I commenced an IT course at TAFE.
One of the first lessons was to use IRC (Internet Relay Chat, if you've ever wondered). To do that, you needed a unique nickname. Didn't want to go with a surname...too boring, so I started trying some nicknames that appealed to me, and that I thought would be obscure enough to be unique.

First up, I tried to use some intersting name (can't remember what), but it was already taken, so I decided to be clever and put a "1" after it. Not clever enough - somone already owned that. So I tried a "2"; surely no-one would have that. After a succession of futile attempts at this, I decided to try another nickname. Same thing with the numbers again, and using an underscore ("_") was no use at all. Geez, how many freaks are out there?!
Then I tried to go a little more obscure. Does anyone remember a cartoon character named "Racer X"? He was Speed Racer's brother. I've lost all the younger forumers now, and I was losing my chance to chat, as everyone else in the class was on and chatting now.
Tried a few other names and gave the numbers thing the flick. I was on a serious mission, and just looking at names now. After a few more names, I gave up on obscure cartoon characters and decided to go with an Aussie theme, to cut out the international "chatter's" names.
More fiddling about, a lot of procrastination and obfuscation, and I was thinking that I'd never get something unique. It wasn't about the IRC chat any longer, it was a matter of pride and a personal challenge.
The more obscure, the better, and if I could combine some words into a single entity, that might just be what i was looking for.
OK, ...obscure. Thinking about Kevin Bloody Wilson and his song about the guy with the tongue that's 10 inches long , and who's learned to breathe through his ears. I do have a sizable tongue, and have been known to poke it out quite a bit when I've had a few beers. (Aren't U guys lucky that I don't have genital piercings)? Cool, let's try Teninchtongue. Bingo...and still 20 minutes of chat time left, as well.

Back to the Brewery name...About 2 years ago, a mate asked me what my brewery was called, and I replied that I was thinking about something like the "SwampDragon brewery" as my house is on an acreage on what's reclaimed swamp, and Dragon just sounded tough and blokey. He suggested I call it the Teninch brewery and I had a "bit of a think" about that.
Hmmm,...Teninch appealed to both my vanity (nickname) and sense of the bizarre (ask anyone). It was certainly unique and ambiguous enough to be a double entendre. I'm sure that most people would think of something other than a tongue, when a Teninch brewery is mentioned.

Since then, I have adopted the Giraffe tongue as my brewery symbol/logo. For those who were wondering what that picture was on my NSW Xmas July case labels, have another look now.

Although a giraffe's tongue is longer than 10 inches (25.4 cm just doesn't sound cool, so apologies to those who are metric), and is actually 18 to 20 inches long and is blue, it didn't matter. A bit of exaggeration is always good, when it comes to marketing!
The giraffe tongue is also blue, so it's a bit a taunt: me poking my tongue out at the local Bluetongue brewery (my tongue's bigger than yours!), and a nod to Paddy's brewery (from Gerard M's quote of "meet you by the giraffes").

It feels good to get that off my chest. Now I now how PP feels after one of his mammoth posts :lol: :lol:

...and that's the story of how the Teninch Brewery came to be named. Wasn't that worth the wait?

Growing up watching those hilarious characters Colonels Klink and Hogan on the televiz.

Growing up watching those hilarious characters Colonels Klink and Hogan on the televiz.

Have you caught the movie about him "Autofocus". I presume you have.

Although he was thought of as a bit starange for his behaviour, he was probably just ahead of his time.

I loved that show though.

Have you caught the movie about him "Autofocus". I presume you have.

Have not seen that movie ATOMT - the two Colonels only came back into my life after a long hiatus when Foxtel commenced to show the old re-runs. I will google 'Autofocus' out of interest.