Jaytee, as our NZ correspondent have you managed to source and try the Moa beer from Blenheim ? Got a review ?
I've been hearing a lot of press about it lately.

For the Aussies a Moa is a NZ historic (ie. now extinct) large bird that was hunted by Maoris and early European settlers as a source of food and for its feathers that where used for clothing.

Did you hear the one about a flightless bird in a Blenheim winery where beer comes in champagne bottles?

The punchline is the delicious "rare beer" Moa, made in a champagne style by young Blenheim winemaker Josh Scott. The son of Allan Scott of Allan Scott Wines, the up and coming beer brewer said when he decided to make beer the only way he could think of doing it was the same way he would make sparkling wine. Put the brew in a bottle, turn it upside down so the sediment drops to the top of the bottle, then disgorge it by freezing the sediment off, topping it up and corking it.

The result is a pilsner style beer with fantastic presentation, no preservatives, no sediment and no added bubbles. "Good beers should be naturally carbonated like God intended," he said with a slightly irreverent tip of his wine glass, filled of course, with beer.

At the moment Moa, "a very rare beer" is being made at Dobsons Brewery with a lot of help from Graham Mahy, a man with thousands of brews under his belt. But the Scotts plan to put in a brewery at their new property near to Allan Scott Wines by summer and expand their production significantly.

It all started five years ago in the Cork and Keg, he laughed, and now they can't meet demand and are getting inquiries from America. Mr Scott's first brewing experience was what his father calls LP, or lethal piss. He and his sister would take their high alcohol homemade wine to parties, leaving everyone drunk by 8pm.

His wine and beer brewing partner Jeremy McKenzie experimented with beer at high school, selling his homebrew to fellow borders at school.

As for Scott senior, he is hushed about his homebrew experiences, although there are murmurings of a chook house wine episode. Moa is a far cry from those homebrew days, and is a sophisticated drop in a sophisticated bottle that allows discerning beer drinkers a good dollop of posh. Josh Scott said that while restaurants normally don't allow BYO beer, he strolled into one in Dunedin with a bottle of Moa, and was able to happily drink his beer. 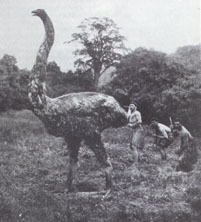 Doc, I read read a review in the Dominion a few months back but haven't sampled it. The article made it out to be a real novelty - son of famed vintner brews beer - champagne beer in wine country etc etc

Recovered yeast and bacteria from 1797 beer

'How to create your own microbrew'