Post a Beer Dog* photo here and tell us something about your pooch.
The photo could be your dog watching you brewing, looking guilty after tearing apart a grain bag, 'minding' your mash paddle for you; any sort of beer and dog related photo will do.

I am sure they do some funny things on brew days, or with/to your brewing equipment. Tell us your favourite beer dog related story with the photo.
Let's celebrate the joy we get from our** Beer Dogs!

*I know technically a 'dog' is a male canine. Let's just generalise and call them all dogs for now.
** I have had dogs but don't have one at the moment. Call it vicarious gratification if you want.

Check this sneaky fella out!

I have a beer cat.

I have a Scotchendog... Partial credit?

Incedentally, i think theres an article in Zymurgy at the moment on brewhouse doggies.
K

Here is my little man helping me out on brewday...
He is technically not allowed into the brewery, but he always seems to get in there...

Dogs are the best! Brewing beer without one mooching around just isn't right...

Me mate Murphy... after a couple of Belgian Ales.

Never trust your dog to mind your beer!!! :lol:

This is Brews. He "takes care of the couch" while dad brews.

Like his father, he's also partial to bourbon when mum's away.

No action shots of him "helping out" on brewday as yet.

I don't wanna put anyone's nose outta joint but.......My dog is way better than your dog. In fact, she's probably the best dog ever. 12 years, 6 mast cell tumours removed, had a stroke 2 weeks ago and still keeps on keeping on. In fact, she's humping her bed right now as if she was a wee pup.

Always have had bullies, the best dogs. My old girl died last year and she made it to 13 1/2. She loved sun baking and being white with a pink belly had lots of skin cancers removed over the years. If we werent heading off sailing i would have had another one. Will get a brindle when done circumnavigating.

Giving me the sad eyes cause I've got beer and jerky and he doesn't. 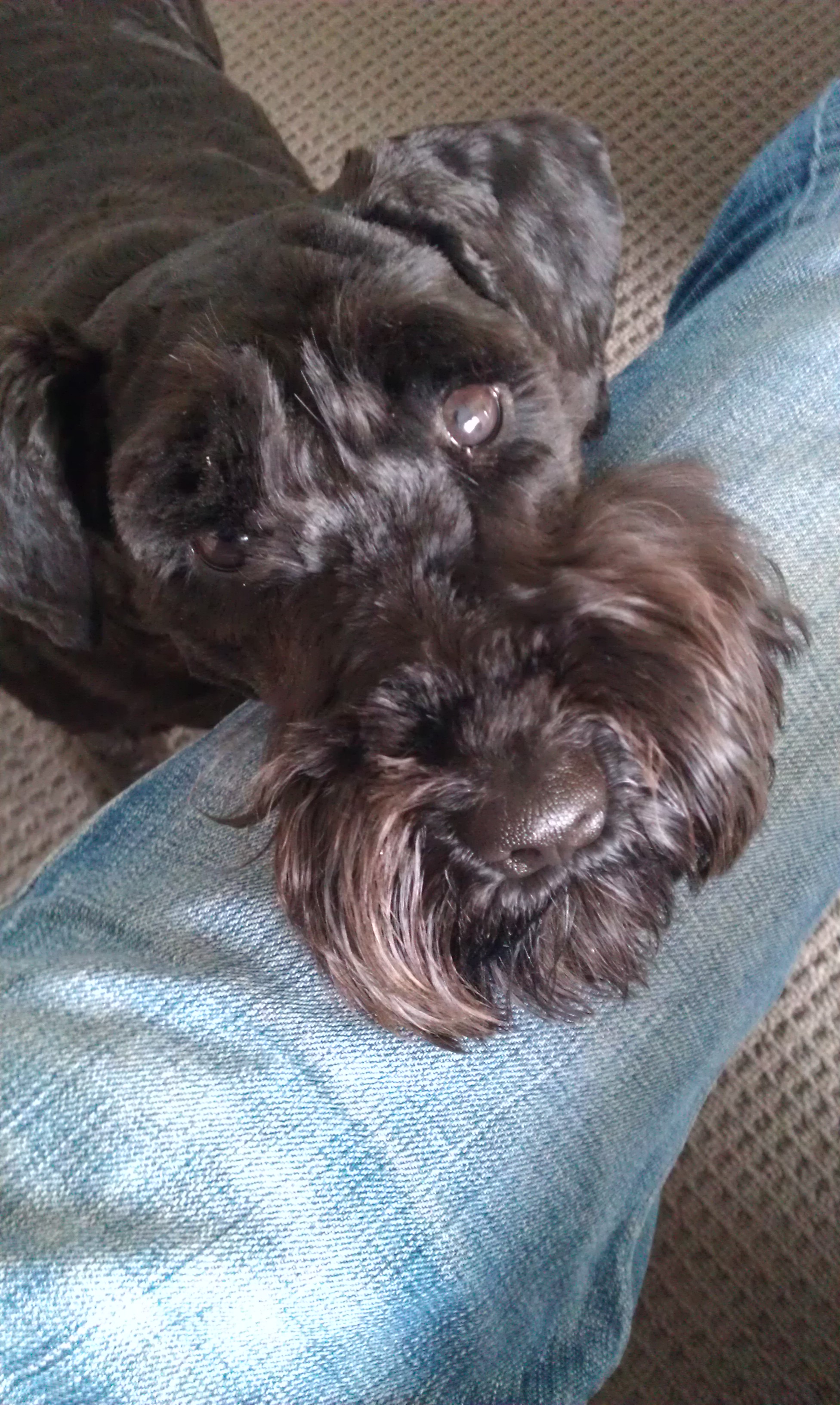 hahah some good pics in here!

Here's my brew dog Lucy. She is my missus dog, which I wasnt really a fan of. But she's grown on me quite alot She's about 2, and is an Australian Koolie with the Sable merle colouring. Unfortunately, the gene responsible for her striking markings is also responsible for deafness and blindness. She is deaf as a post. I have taught her hand signals and she is pretty good with those, however have difficulties taking her places as she cant hear commands to come back etc? I've found some collars which vibrate and rumble etc via remote control for this purpose but they are wicked dear (>$300) so if anyone has any ideas I'd welcome them.

That said.
She regularly makes a nuisance of herself around brewing related areas by investigating the fermenters, eating old grain and just generally getting in the way.
Sleeping before I woke her up. She is easily snuck up on.

All buggered after helping me with a batch

Making herself dirty after a bath and laying in the sun. Like others, I'm sure they'll be some sun related growths removed from her in later life.

Overall though she is awesome, despite sometimes being a bit of a burden with the hearing, I wouldnt trade her for anything.

The conudrum of ordinary homebrew - Instructable