Just wanted to know if i have a bad fermentation? Brew: coopers sparkling ale.

It hasn't been great so far... i racked after 4 days at SG 1016 to 2ndary. It bubbled for a few more days after that, but then died in the arse and was basically stuck at 1014 for nearly a week. All temperatures were held between 19 and 22 deg C. I then raised room temperature to 26 deg for 1 day which seemed to get it going again and finally brought the SG down to 1012. Well it's now been there for another week (2 weeks total now in 2ndary) and it occassionally bubbles. My concern lies in the "surface" characteristics of the brew. I took the following pictures through the top of the sealed fermenter, so i apologise for the quality, but you will see the "grey film" that has developed on parts of the surface, which the bubbles are having trouble breaking through. There are bubbles there, so it is obviously still fermenting... but just what is fermenting concerns me??

The taste is not great, but it is hard to say if it's off. It is certainly not sour or cidery to taste, but it does have a strong smell.

I am concerned with bottling when the SG is so high... only because they taste syrupy for ages. should i let this baby sit for another week, throw it out, or bottle it?

has anyone seen this before?? 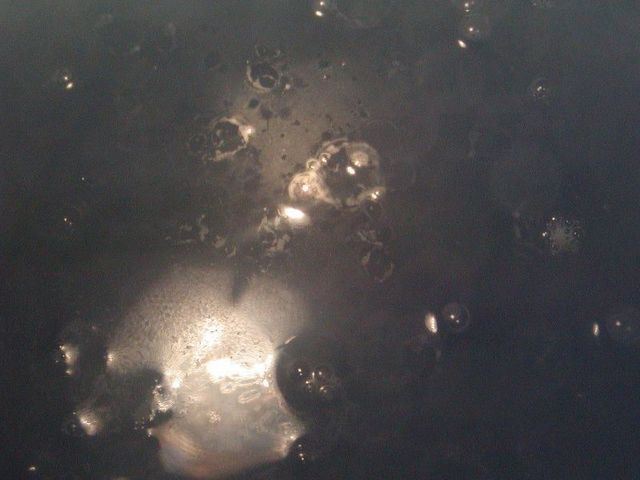 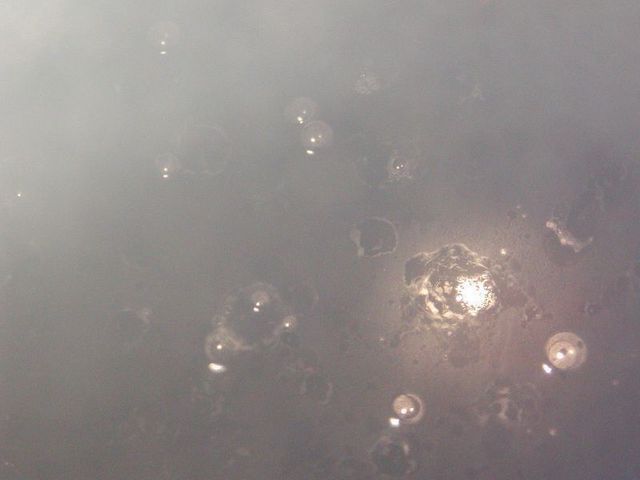 A word of advice Wardy, don't rack your beer until primary fermentation is completely finished. Racking can lead to stalled fermentation and if you are not careful you can introduce infections.

If i were you I would skim the grey material off the surface with a sterilised spoon or jug. If the beer has no off flavours then go ahead and bottle it.

How much yeast did you pitch? This can have an affect on finishing gravities. If it was dried yeast from under the lid then it's probably 5 grams. Not enough for a 23 litre brew assuming that is what you have made. You need at least 2 packets.

Post all the details of your beer and ingredients and someone may be able to pinpoint why you have scum on your beer.

yeah i did use the yeast sachet under the lid. Coopers sparkling did include a 7g sachet which was "specially" marked for this brew so i did use it, instead of safale (which i would normally use).

i agree now with not racking until primary has finished, as i have had 2 stalled ferments!!! my current brew IPA used safale and have not racked and it is brewing perfectly, SG already down to 1009, and still bubbly (Day 10).

struth
the closest thing ive seen to this was a wyeast 1335 british ale 2 that i used awhile back but has more billowy/fluffy.it too was greyish dark in colour but i let it go racked to secondary then cc.turned out a great tasting beer.

i guess i would only advice to let it continue as tda suggests and see how the final beer turns out.

Geez wardy didn't know you worked for NASA. That looks like a picture from the Mars rover at night!

Agree with TDA skim that crud off and have a taste. Good luck! :unsure:

Wardy,
I just racked one of these to secondary last Sunday. Mine took about 36 hrs to start bubbling but it went sick for about 3 days after that. I also used the yeast that came with the kit. an all the ingredients you did.
I racked at 1012.
I have not got anything like that growing on the surface. I stuck my head in last night and it smelt fine.
Tasted it when i racked and it tasted great.
I'm giving the comparison as its the same kit.
Yeah, go with what TDA suggested and bottle it.
Good luck with it.

1.012 is a pretty LOW finishing gravity in my brewery
Bottle it
If you're concerned about the filmy skin, stop racking to your bottling bucket before the scum goes into the tap.
J

What was the OG of the brew? good rule of thumb: FG=1/4OG

(high sugar brews will go under 1/4OG, brews with musch dark grain won't quite get down to 1/4)

For dry yeast, Lalleman recommends 1g/L of wort, so 23g dry yeast for a 23l batch. A 7g package is less than a third of what is needed! And that 7g has been at room temp, not in a fridge where it should be kept.

All that said, I do pitch 12g dried yeast into 23L batches, BUT those batches would be of OG 1040 or less AND I aerate really well. Get a 20L white food-grade plastic bucket clean&sanitise it, after making up your wort slosh the wort to and fro between the bucket and fermenter a few times. if only pitching 7g yeast (or 12g into a bigger beer) then repeat this sloshing twice a day for the next three days. Your ferments will be 100 times healthier

go to hbd.org and search for "Dr Cone" and "big bubbles"

Thanks Jovial Monk, i will try your aeration technique with the next couple of batches. I've got some dissolved oxygen measuring equipment, so i might just do an experiment to see the difference in DO between a "stagnant" ferment and an oxygenated one.

I did skim the surface off this morning as per your suggestions and will bottle tonight. Still tastes ok, so will be interesting to see how this one turns out. Thanks for all your tips

Funny you should say that. I am brewing a sparkling at the moment and i remember it had a grey layer on top of it as well. It wasnt like something was growing, it looked like it was an oily layer ontop, but it was covering the whole things just patches. I think it was after i racked it into secondary (day 6) i noticed it????

Just went and had a look then but couldnt see, the light was bad though. Im not really worried took an SG reading before at 1.012 (OG 1048) so will bottle today or tomorrow.
W

Barnzy, that's what i got too... more like an oily layer. I finally took the lid of the fermenter to take a proper look and it was more like an oil slick in patches. bottling tonight, so we'll see how it tastes...
J

I've had a number of beers that look like they have an oil slick on top.
It only appears in the high hopped beers.
Haven't tried to correlate it with the hops I used for those beers, as they all came out tasting great.

I agree with you dock...had the same in the high hopped beers...

But what does RDWHAHB stand For?

You are kidding me aren't you GMK ???

B
Fermenter bubbling after 19 day ferment

H
How long can I leave a NEIPA in the fermenter