Would any of you knowlegable beer drinkers know anywhere in Sydney where Youngs Double Chocolate Stout might be bought if at all. My wife had one last year in London & would kill for another.
Cheers Crusher.
J

you could brew one yourself fairly easily

get your wort boiling, melt some quality couvuture(sp?) chocolate, add to the boil


I did that, made a batch of oatmeal stout, fairly neutral, added a melted Club choc bar to the boil, some choc spirit flavoring to the bottling bucket

will rebrew this, but use either some better quality choc, and more of it, and straight choc essence to the bottling bucket


There is a thread about it on the Oz "Craft"brewer list, fair has me rolling in stiches of laughter

This is a phenomenal drink - silky, luxurious and chocolatey. At about $8-9 a pint bottle, it is for special occasions only. It is on my christmas wish list.

Young's claim that the "Double Chocolate" is from chocolate malt and real chocolate.

Try giving "Liquor(?) on Parade" in Kingsford a buzz. The guys from the Eastern suburbs brew club get their odd beers from there. I have always found any new beer there the day the papers print a story on it, maybe they might have it?

gotta agree with you deebee.when last in perth you put me onto the international beer shop and that was one beer you recommended.leif had it in stock and i loved it.
cant wait for my next visit down that way. :chug:
B

I purchased this lovely brew from "Nick's wine Merchant's" here in Melbourne, they are a chain so hopefully they are in Sydney. h34r:

I've spotted this beverage and a range of others such as german wheat beers, etc etc at our local Cheaper Liquor store here in Hobart. A nice range of imports and certainly a nice change from the normal boring ass range of beers. The last few trips there I have journey'd right around the globe. The staff kind of look at you weird though when you pay $5++ for a single stubbie and I had one guy ask me why I would pay $7.50 for a stubbie when you can buy a block of 30 can's of Hahn ice for $28??? Hmmm. Who got the bargain, really?

Does anyone know where I can get the Youngs DCS in Brisbane???

I just enquired at the Harris Farm Market bottleshop at Riverbank in Parramatta (Sydney) while at lunch.
He said he was trying to get it in but there wasn't a distributor for NSW.
He said he was contacting the SA distributor and then was going to try and get some in.

I'll let you know if he does.

So I actually bought a bottle each of the Cascade Spring Fest and the First Hop.

interested on what your thoughts of the spring fest
to me it tasted just like the premium with late hop additions.
my senses havent been refined yet so im awaiting your thoughts

This is one of my favourite sweeter stouts actually. Second only to Samuel Smiths Oatmeal.

The only gripe I have with the SS Oatmeal though is the consistancy. I've had two great bottles and one average bottle now. I think it has a lot to do with storage (they're clear glass).

Yeah! what is it with these english breweries making fine ales and bottling them in clear glass? From Speckled Hen to Marstons and most of the Youngs range, they are all in clear glass. Don't they care?

deebee, I have to correct you there.I have had some of Youngs beers, Double Chocolate, Ramrod, Special London Ale, Special and Waggledance, only the last beer mentioned was in a clear bottle.

I am awaiting a phone call from Northmead cellars in regards to the possibilities of a carton landing in his store. The gent in the store said he had a supplier in WA and would enquire as to the chance of getting a carton in, as they just recieved a container from O/S recently(the supplier). So as soon as I get the call I'll post it here

Called into Harris Farm bottleshop in Parramatta today.
They have not received their case of Youngs Double Chocolate Stout yet.

However they have received a big shipment of German and Belgian beers. Quite a selection.
I couldn't resist the Erdinger Doppelbock, and Rochfort 10.

Thanks Doc & Linz,
Please keep us informed if the Y.D.C.S. comes in. I will be down like a shot from the Central coast.

Last time I was at the bottle shop in Parramatta it hadn't come in.
However I did find it last week at the Woolworths supermarket in Paihia New Zealand.
A lovely drop. 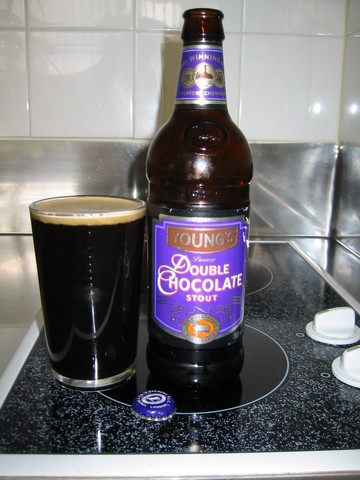 Posting pics of that is cruel....

Doc said:
However I did find it last week at the Woolworths supermarket in Paihia New Zealand.

dont think ill be waiting at my local woolworths for one of these. must be a different chain.
joe

A
Off Flavour - Brown Beer

Help me fix this recipe in BYO magazine...