Im moving up to full wort boils, (on my path to all-grain) and i was thinking about building a CFC, i didn't want a garden hose style one, because i want it to last for ages, and i didn't really want to have to pay close to $200 for something that no-one will definately tell me doesn't contain non-food/water safe solder..

Basicly im looking at building a straight one.. but with 3 tubes, a 1/2 in the middle carrying cooling water, a 3/4 on the outside of that (with wort) and a 1" on the very outide holding another jacket of water, then silver soldering on the connections after that..

disadvantages of this.. it will be 2M long, (trying to bend 3 thicknesses of copper pipe doesn't inspire me) advantages of this, because of the 2 water jackets creating a jacket of wort around that, that is only 2mm thick (but flows simularly to a 1/2" pipe) it has TREMENDOUS surface area, 3 times as much as jacketed 1/2 inch pipe, and 4x as much as 3/8 pipe, so it should cool the wort to within a couple of degrees of the cooling water no worries.

I'm also going to solder on some copper wire in a spiral shape, to get turbulence into the wort (not sure it will make much difference with a 2mm jacket, but i'll give it a crack)

Because of the expense of 1" pipe though its a bit expensive on the parts side (and 1" fittings are twice the price and a bit)..

because pipe comes in 6 meter lengths, i can make 3 of these for not much more than it will cost me just to make one, anyone interested? probably about $120?

If 2m isn't long enough (I have no idea if it is or not, but I'm not sure if it will be?) you could make three 2m ones and join them, zig zag it back on itself.

That way you get 6m of chiller (that appears to be the minimum needed). Don't worry about jacketing the corners, just use elbows (possible contamination spot here).

What's wrong with a conventional one anyway

Cheers, lets see how it works.

the soldering should not really be a issue as i have mine, the inner pipe (wort) only has solder on the outside (connecting the water tube to it)

So for me its not a issue, 8m long and fits in with the brewing gear well. I have used a hose to save $ and if like me any equipment brewing wise is "updated" before it is worn out to improve the setup.

justin: the chillzilla ones are only about 3M and my sytem has more surface area (about twice), so it should be fine in 2M..
G

Is almost finished, i hope to whack some pics up tomorrow..

yep ,echo of big d for me too,seeing other brewers ideas etc on the gallery is top shelf.
S

Because of the expense of 1" pipe though its a bit expensive on the parts side (and 1" fittings are twice the price and a bit)..
Click to expand...

Probly too late but what about using PVC on the outside. It is only water contact, heat might be an issue. Even the black poly pipe might be a go.
G

then i would have had to find a fitting that would have handled the PVC... (it would have a thicker wall thickness than the copper pipe.. had a testish sorta run last night... i think it actually flows abit too much wort, and i might have to restrict the outflow on the tap... the water was flowing through too quickly, (would have run the 10L or so i had through in a couple of minutes, and was outputting slightly warm, but i turned the tap down on the inlet, and it was coming out cold... keen to try it with 25L, tell ya what though, after just making it, i know of a few things i would have done differently already.. just in the construction and the alignment of the fittings... eg at the moment the wort enters on the same side as it exits, i would put them opposite next time..


I think i'll put a stick on thermometer on the outlet of the wort, and a valve there too, so i can restrict flow at the bottom end...
G 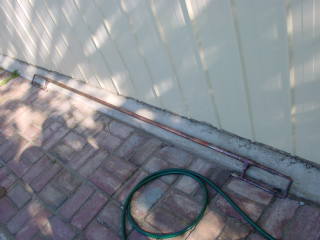 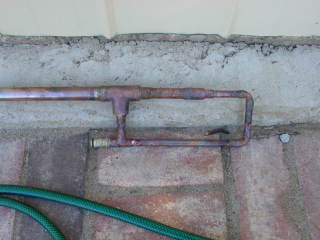 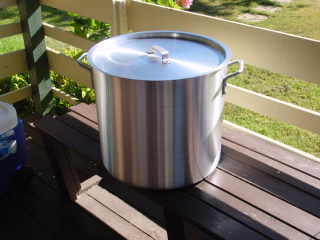 top stuff GSRman - when you said gigantor you were't kidding - you have got a big one !!!
T

GSRman,
That chiller looks worth copying. You must take a water meter reading and record some flow rates so that we can get an idea of the performance. I am always trying to reduce water usage and feel quite guilty when I dump a couple of hundred litres of the stuff down the gurgler.
G

tony, Since i now have my post etc, im hoping to do a test-run sometimes soon

Tony M,
just a suggestion but all looks high pressure so why not run a hose out to a sprinkler off the chiller and water the garden at the same time.
cheers nm

Forgive me GSRman, but where does the wort flow in and out? I'm thinking all I can see from the picture is a connection for the hose and so pipe for the wort? I know it must be there but where?

Also, where did you get your lovely shiny pot? I's like three of those myself
G

metters: it has click lock fittings on both ends, i was planning on running a hose off it and watering the veg garden, sprinkler might go okay, but im not sure if the flow rate will be enough... hmm i suppose i could always just run the water through quicker.. when i was testing for leaks i blocked one end and had it up to full mains pressure, so i dont think pressure will be an issue..

justin, thats what i get when i rush the pics.. its pointing the other way.. down at the ground.. (i haven't put the short extensions i was going to put on yet... ) when i put on the tags and give it a polish i'll take some more pics..

Ah, nice one. I really couldn't wort out where the wort went in or came out. That answers it. 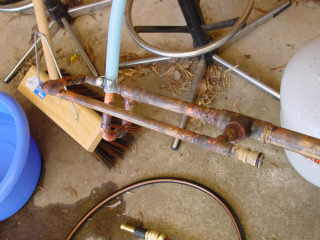