Number three, with a stent.

GLASGOW is no longer the heart-disease capital of the UK, dropping to third in the league table of deaths, figures show.

wide eyed and legless said:
Sent off an email to the seed potato suppliers in SA about the Kestrel spuds and availability for home gardeners, got no reply, will try Diggers and Green Harvest see if they can get them. There is another pommie one called Swift planting to lifting is approximately 7 weeks.
Did a post somewhere about the world shortage of phosphate, we are on the brink of phosphate being mined out and Monash Uni has been doing experiments with thousands of species of plants and the effect of the lack of phosphate, results are dwarfed plants which are packed with cyanide (survival mode) and the sorghum produced enough cyanide to kill a cow.
Amazing how plants can produce cyanide so easily, and how so many plants are toxic, even fungi producing poisons and their roots hardly penetrate the soil. I have a plant in my back yard that if you laid underneath it for 5 to 10 minutes you would die.
Beware the plants.
Click to expand...

Woah, woah, woah!
You have a plant that, just by resting under it you can die?!
What kind of Death Tree is this!?
W

GLASGOW is no longer the heart-disease capital of the UK, dropping to third in the league table of deaths, figures show.

They are about to become heart-disease capital they are going to increase the price of alcohol to $1 a standard drink at the super market thats $43 for a 4L cask of goon that has 43 standard drinks the government thinks they have a drinking problem would think alcohol would thin the blood and help the heart and probably kill your liver and you die from that and not heart-disease .

We had a fish and chip shop here near the Dairy Bell ice cream factory which sold battered black puddings, and the best chips I have had are beer battered chips

BrockHops said:
Woah, woah, woah!
You have a plant that, just by resting under it you can die?!
What kind of plant is this!?
Click to expand...

Last time in Edinburgh we went to their equivalent of a Westfield Food Court and there were stalls selling all sorts of goodies like haggis etc. Boys and I had haggis (deep fried battered of course). SWMBO liked the sound of the black pudding (nice neat little rounds fried with your breakfast). When it arrived it was at least a foot long, battered, resting on a huge mound of chips and hanging over both sides of the plate.

Once, going through Jedburgh in the Scottish Borders I stopped for a meat pie. Suddenly, into the batter with it and into the deep fryer - stirred around for about three minutes and popped into a greaseproof paper bag. Tasted heavenly.

Back on topic my Eden Seeds Okra (Clempson's Spineless) are popping up after only 4 days. Love that mob.

Took out a couple of my mini cauliflower and some Blue Saphire spuds, not my choice of potato but my wife's, going to be interesting to see if they change colour when cooked. 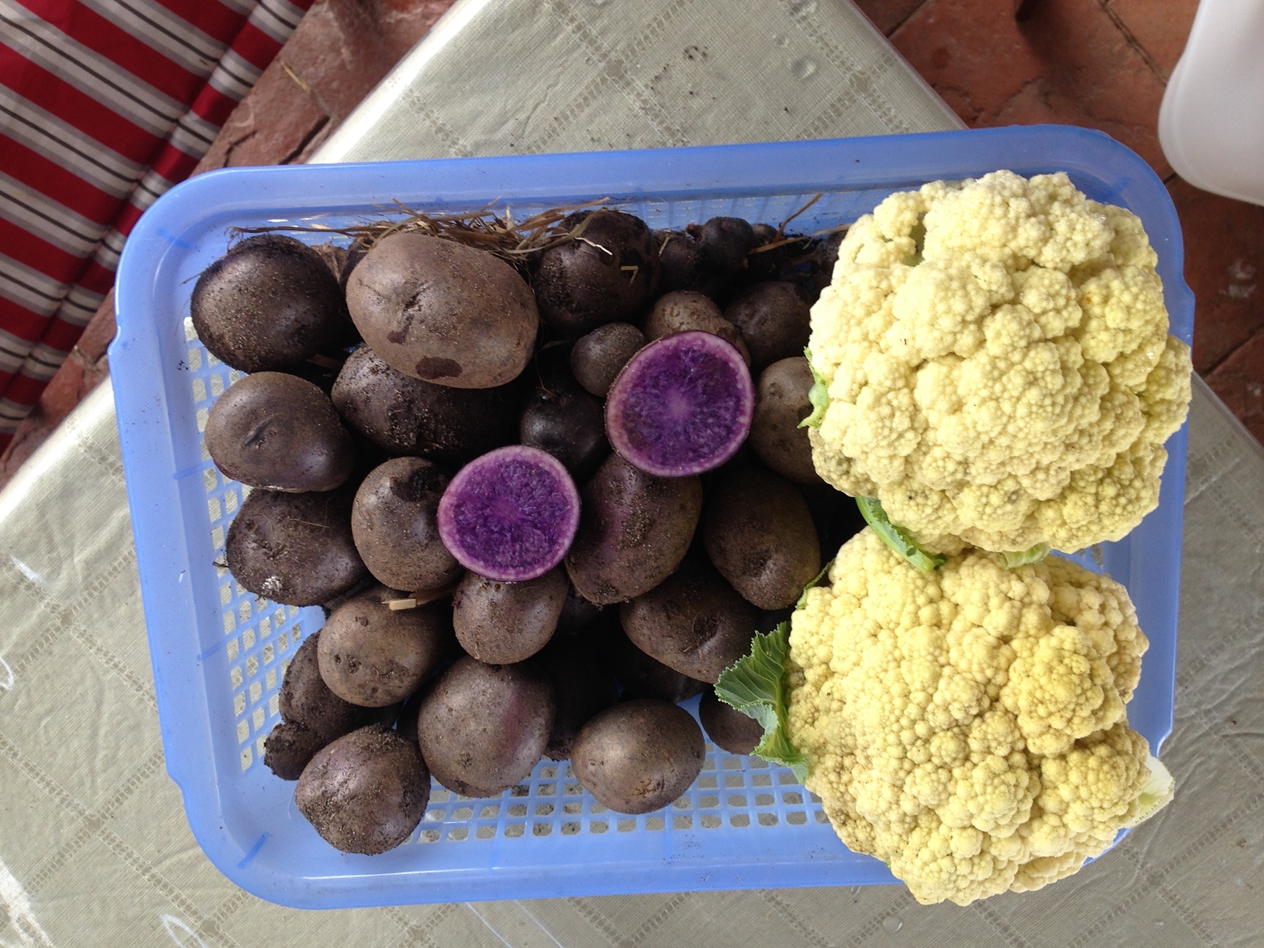 Anyone grow onions was given some sweet Spanish seed and planted about 5 months ago in Brisbane did not know about short and long day length onions and sweet Spanish are heading to being long day and Brisbane only gets 13 hours and 50 odd minutes .
One onion seems to be bulbing up so may not be hopeless.

Thinning out the onions, these littlw fellas will be used in a roast of some description I reckon. 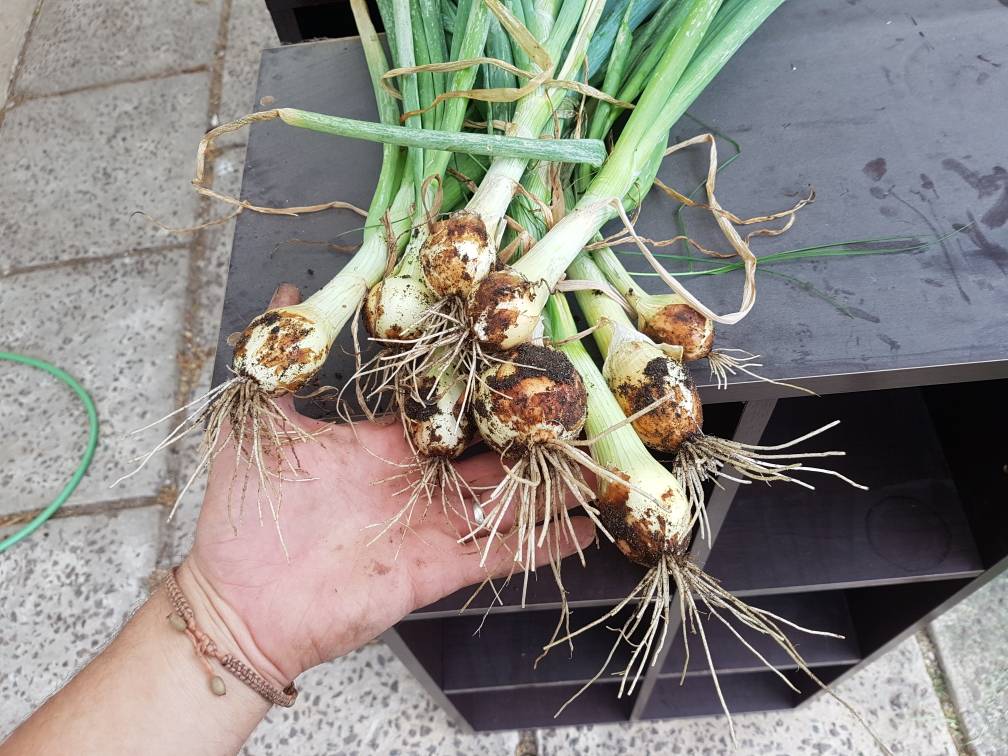 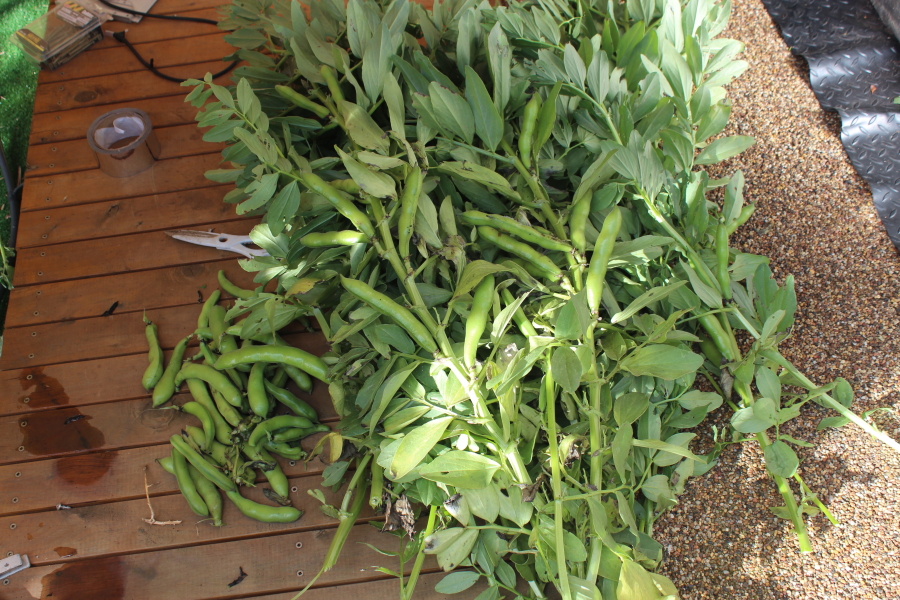 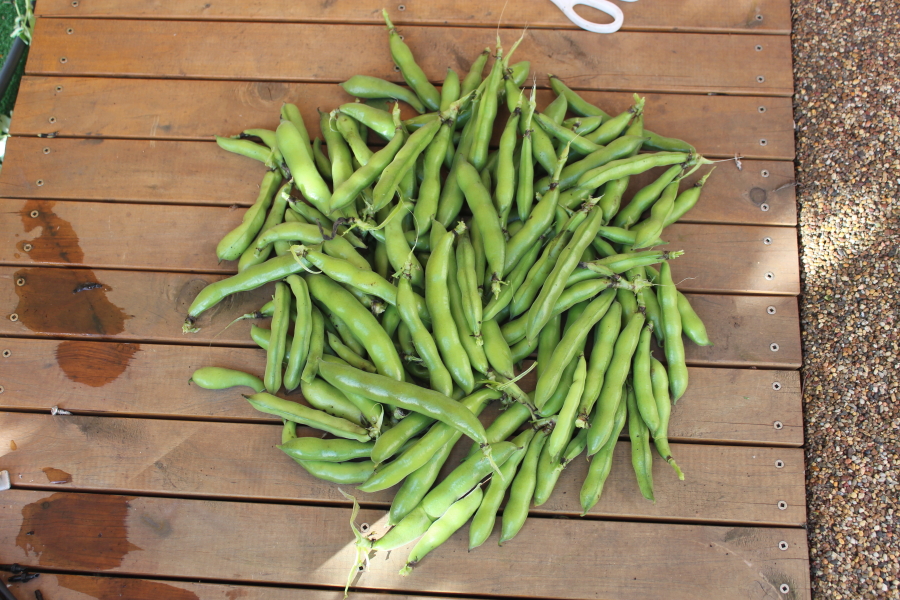 I presume you left the roots in Dan, we were away when my Dad pulled out the beans but I am now into the proper bean stage with the Kings Cobra climbing beans and Simba dwarf. The Tiger nuts are coming along nicely but my hydro tomato are dismal don't know why. Did a 50/ 50 mix with Perlite and rice hulls every thing is fine with that but the tomatoes are struggling.
The best tomatoes are the ones in the ground, Money Maker going really well, as is the white onions and shallots

Should you leave the roots in? I had broad beans growing in my hop areas with some vague idea of soil improvement in mind, also thinking they would be a winter/early spring crop but got pissed off that they were then holding up the growth of my hops so just ended up yanking them out so that the hops could get some sun and get growing.

Beans put nitrogen into the soil, always just cut them down when finished and leave the roots in. The hops will get up to the sun, I do believe hops was one of Charles Darwin's favorite plants, in fact it was Darwin who proved plants could see. (light at any rate)

Just removed the last of our broad beans last night - some for puree, some too far gone so will dry and store for seeds next year. Didn't know about leaving the roots in but plants are still in and now I do. Good tip.
B

******* ants nesting under my cucumber leaves. Read something about a borax and honey mix to kill them, will it also kill bees?

I just use ant kill if I think they are protecting the aphids, but I did read somewhere about using white vinegar to kill ants.

Ant rid can do a nest but not 100%. They have come back for me. They're nesting inside the roller of my new outdoor blinds!. WTF!. It must be an ideal temp control area they found. Very busy loading, running around with eggs etc. Those frgn tricky ants. I lost patients and blasted parts of their main roads with aerosol insect killer.
Pests out of control, premature flowering outa control! Whats with this season?

Just ‘cos we’re on pests - I’ve had rats recently and tried so many things but finally the cat got a couple and finally the traps I laid months ago started catching too. Most effective has been tomcat snap trap with fresh malt barley as a bait. So good, I even caught my own finger in it yesterday.

The cage traps work better for rats, they aren't as silly as mice are when it comes to snap traps.
My dog killed 2 possums this year, one had been around for ages great big thing, through either laziness or age it decided not to climb the tree but have a kip under the water tank below the tree.
Needless to say within 4 weeks replacements have moved in.
S

manticle said:
Just ‘cos we’re on pests - I’ve had rats recently and tried so many things but finally the cat got a couple and finally the traps I laid months ago started catching too. Most effective has been tomcat snap trap with fresh malt barley as a bait. So good, I even caught my own finger in it yesterday.
Click to expand...

I suspect it may be a lazy rat that has been eating my tomatoes. Only the ones low down on the plant at about rat hight have been half eaten.

I have found the Nooski ring traps from Bunnings pretty good but only in warm weather though as the rings don’t close fast enough when they are cold. They are a safer option to snap traps if you have cats or other pets.

Rats are very wary of baited traps. Loughran Family Stout malt or Gladfield Ale works best as bait I have found. I have had very limited success with Joe White Trad.

The best way to catch rats is use unbaited traps like this http://www.fenntraps.com/mk4-fenn-spring-trap.html in a tunnel. Rats don’t like being out in the open and love the cover a tunnel provides if you place it on their runs next to a wall or fence. Only thing is when I tried to buy one in NSW a few years ago I couldn’t find one and think they are illegal to use here so check the regulations in your state.

When I was a kid I had 100% success rate setting spring snares on rat runs but again I think they are illegal to use in NSW.

A good book on rat catching is Tales of a Rat Hunting Man by D. Brian Plummer one of his methods is using a garden sprayer to vaporise and spray petrol into a rat warren and blow it up by throwing a match from a safe distance.

As a kid me and my mates had a similar method using rocket fireworks. Just break the stick off a good sized rocket, place it at the entrance of a burrow and light the fuse. It would go deep down the burrow and any rats not killed when it exploded came out disorientated and could be easily shot with an air rifle or hit with a stick.