Yet Another Soda Stream Adapter

I made an adapter for a reg to soda stream bottle to go with my party keg. The great thing is I accidently hit on the regulator for $75 inc GST.

I was planning to put a high pressure needle valve on the inlet side but I'll be buggered if I can unscrew the 1/4 NPT fitting without breaking the reg.

On your site Sosman you say that you need the little insert to depress the pin valve on the sodastream. I know what the soda valve looks like and I know how it works but I didn't think the reg screwed straight on to the bottle? If this is the case then I could just get an insert made up as well.

Oh, and nice find on the reg. I'm thinking about setting up a second keg system for my Dad using a soda stream and picnic tap. He can just borrow a keg full of beer when he needs it.

Keen to hear your thoughts.

Justin I believe it is called "CO2 thread" which might also be CGA 320. To further confuse things it is very close to 1/2"BSP.

In any case, the reg screwed onto the bottle (new Aluminium type). I cheated a bit, I tapped the inside of the tube between the reg and bottle to 7M1.0 and then made the insert from brass. A bit of adjustment (screwing the insert further out each time) and badabing.

Should work fine for several kegs, even more if it is already carbonated. I mainly plan to use it with the plastic party keg.

The other nice thing about the regulator is that full scale is 400kPa, not like my HBS supplied gauge which needs a microscope to read it at beer serving pressure.

Thanks for that. Maybe the new soda stream bottles are a different thread or maybe I just don't know what I'm talking about. I'm thinking it might be time to revisit the soda stream idea.

The soda stream thread is definitely different from a CO2 bottle thread.
The soda stream bottle thread is the same pitch but is a lot smaller in diameter. This means a normal reg will fit a soda stream bottle (very loose/sloppy) but a female soda stream thread wouldn't fit a CO2 bottle as the male piece would be bigger than the female piece.
I was looking at doing something like what you've done Sosman but didn't like the idea of a couple of thousand PSI behind a sloppy fitting connection, which is why I went and got a fitter and turner to make one up. (He's a good one too)
Once you setup and knew the right thread pitch and depth it would be piss-easy to make them up, and it's probably pushing it to say there's $5 worth of brass.
After saying all this you will probably never have a problem with yours.
Your biggest problem now is keeping supply up to the little party keg.

Hoops et al,
I've been reading this and the earlier sodastream thread with great interest. I'm yet to get into kegging, but last Thursday, one of the brew club members turned up to the monthly meeting with a small (looked like about 10L) picnic keg ?term? in a cooler bag the size of a large backpack which was gassed by a sodastream bottle with reg attached. He used a plastic tap (picnic tap?) to serve a great pale ale and the whole setup looked great and very portable for the weekend barbies in the bush!

Does the sodastream bottle carbonate the kegged beer or is this system just used to push the pre-carbonated beer out of the keg? If that's a dumb question, then please correct me - I've found little info on this topic elsewhere on the net but I would love to have a portable kegging system to get by with until I can afford to convert the garage fridge and put in a two tap keg system.
Cheers,
TL
S

Does the sodastream bottle carbonate the kegged beer or is this system just used to push the pre-carbonated beer out of the keg?
Click to expand...

Either/or - that is totally up to you. I generally transfer to party keg from 18L style so it is already carbonated.
S

I considered making a fitting to fit exactly but when I screwed this one on I figured there is no way it was just going to fall off. I tested for leaks and there was zip.

However I would like to add a HP needle valve in front of the reg so I might need to make an adapter anyway.
S

Sosman, do you know if the old sodastream bottles are the same thread as the new one you show in your pics (AlcoJet?).
They look to be a different size bottle, but I was wondering if they were different threads? 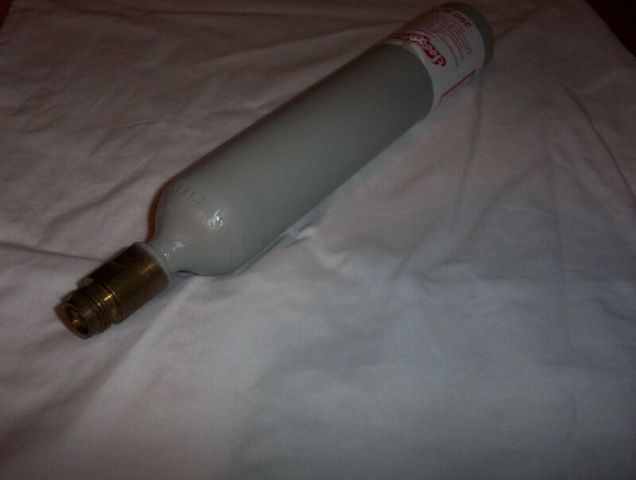 Trough Lolly said:
Does the sodastream bottle carbonate the kegged beer or is this system just used to push the pre-carbonated beer out of the keg? If that's a dumb question, then please correct me - I've found little info on this topic elsewhere on the net but I would love to have a portable kegging system to get by with until I can afford to convert the garage fridge and put in a two tap keg system.
Cheers,
TL
Click to expand...

I you had a big bottle it would be the way to carbonate but if you only have a soda stream bottle you could either naturally carbonate or use the little bottle - not sure how long it would last though.
I you get into kegging I would at least get a CO2 fire extuinguisher - around $100 ready to go for a 5kg - no rent.
The little taps are often referred to as a "cobra" tap/faucet in the US and are U$3.50 from St Pats, I think around $15 in Australia.
Hoops

Shed said:
Sosman, do you know if the old sodastream bottles are the same thread as the new one you show in your pics (AlcoJet?).
They look to be a different size bottle, but I was wondering if they were different threads?

I've got one of the old sodastream bottles and the bottle has a label saying 250g
Click to expand...

Shed
I'm almost certain that they are the same thread. The new bottles differ in that they are a little different in size and made of Aluminium not steel.
The guy that made my soda stream adaptor has a new bottle and I have several old ones so I can check and confirm for sure next time I see him.
Hoops
M

hoopsunitedbrewery said:
but if you only have a soda stream bottle you could either naturally carbonate or use the little bottle - not sure how long it would last though.
Click to expand...

I did some sums a while ago on how much gas is needed to carbonate and dispense a keg. I posted under a post from Goliath regarding his great little 1.5kg gas bottles.

IRRC it takes approximately 70gms to carbonate an 18ltr keg (for an ale) and another 70gms to dispense. If the soda stream bottles are 250gms it would only be enough to carbonate and dispense 1.5 kegs, and less if it was a lager or wheat beer. It's probably best to just use it to dispense at parties, and would be even better if you had a 3gallon keg.

Hi MAH,
I posted some gas sums recently and have repeated them below. It is 45 years since my brain had Boyles law belted into it by Bro. O'Driscoll so I am a little rusty and perhaps off in my reasoning, but you can see my gas bottles last longer than yours!

"A litre of CO2 weighs about 2gm. and a sodastream bottle holds 330gm. or 165 litre of gas.
An 18L keg carbonated at 2.5 Vols. holds 45L of gas but if the beer was fermented at 18C. it will already contain 0.93 vols or 17L of gas, leaving 28 litre reqd. or 56gm. CO2
If we dispense at 8psi., we will in theory use according to Boyle, 18 X 22.7/14.7 = 28litres or another 56gm. of CO2.
That adds up to 112gm of gas per keg which I know is a fart short of three kegs per bottle. In fact, if a group is on a keg demolishing mission, not as much dispense gas is reqd. as the dissolved CO2 has no time to dissipate and a very low dispense pressure is necessary in a room full of overly happy souls.
I should add that I use compressed air for all my sanitising and purging.
Regards".
W

awesome info, good read, my question... I have a standard keg setup but want to take a couple of kegs to a party, i could not be arsed to lug my co bottle... my plan is to pre carbonate the beer and make an adapotr so i can use a bike pump to keep the beer at pouring pressure, a simmlier method is used when you hire kegs from the pup for parties, they just use a standard pump that creates pressure in the keg, i dont plan on keeping the beer after the party (it will all get drunk-and so will I) so long term contamination is not a problem....

Have you looked at adapting what they use for pumping up bike tyres with CO2 ? They use the small sparkler cylinders.

Yet another good thread - thanks for the reply Hoops!