Some Beer Tasting In The Uk

Got back on Sat from a few days in France and a one day stopover in London. As expected the beer fair where I was was pretty plain, ended up drinking Kronenberg 1664 most of the time which was good enuf to see me through.

In the UK I stayed at a relatively new (450yr old) inn about 30mins from Gatwick airport. Only arrived at 10:30pm and left at 8am the next morning They did have three real ales on the menu:

Harvey's Best Bitter 4.0% ABV - this was my favourite beer I tasted on the trip, very fresh tasting with a surprisingly full body and huge hop taste. Nice malty finish, deep brown color with a mild bitterness. To me it tasted like lots of progress hops and maybee some goldings but a very nice drop. http://www.harveys.org.uk/t1allyeardraughta.htm.

Badger TangleFoot 4.9% ABV - pretty average I thought, found it moderately hoppy but very fruity and quite sweet which really set me off it after just 1/2 pint. Less body than the Harvey's. Perhaps this one was getting on in age? If that was as good as it gets I can definately brew better.

Can't remember the third beer not that it matters as it was vinegar! One thing I now appreciate about the whole real ale thing is that you need someone who is on the ball to be looking after it as they go off and drinking sour beer is not something I want to do that often.

Also tried a couple at the airport at Weaterspoons but I was not feeling that well so can't recall exactly how good or bad they were. Courage Directors was the best one quite a bitter beer but with a nice body to balance it out had I been feeling better I would have had another couple. Tried the flowers IPA and found it farily average, 2/3 of the pint was left. Can't recall what made me dislike it I thought I picked up a slight sour taste and was perhaps thinking of my stomach before a 20hr flight

Anyway next time I make it over there I will endeavour to find a good english pub with a landlord who takes good care of the beers as I can see that this really has a large impact on the taste and enjoyment of the beer. If you come across the Harvey's on draught give it a shot I was pleasantly surprised.

Here is an image of the wall in the room I was in at the inn, I thought I must have had a few too many when I went to bed turns out those beams were all on quite an angle 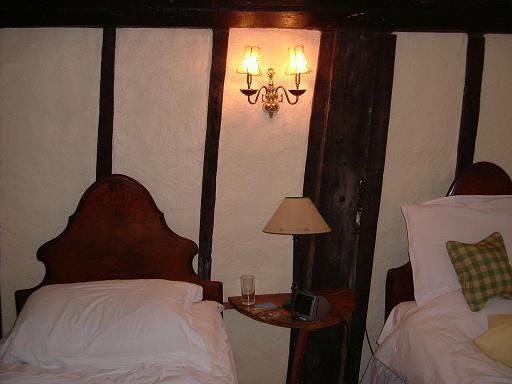