I have a 44ltr esky which i want to build a manifold for. Just a few questions:


* can you make the manifold from pvc, its cheaper by about $20 and i dont need to weld it.

* does the manifold sit on the bottom of the esky and is it as big as the bottom.

* what size pipe, i was thinking 20mm

All help is appreciate immensly.


p.s Bought my gas burner today, (4 burner type with adjustable regulater. Did anyone fill the temp go up today at 3.30. This things a beauty
G

Lots of people know lots more about this than me but I am soon to do the same thing, and have been thinking about it a lot:

Read The appendix of How to Brew online for description of flow through the grain bed. One main point, the manifold must not be too close to the wall or you will get short circuit flow down the wall instead of even seeping through the grain bed. The manifold can sit on the bottom and most people put the slots or holes on the underside of the pipe. From a flow efficiency point of view in theory slots would work better than holes.

Now, lots of people will probably say you cant use PVC. They will say
-PVC is for cold water, cPVC is for hot. BUT that is recommended by plumbing outlets, because the pressure rating of the PVC pipe is downrated at higher temps but cPVC is not. So PVC will burst with mains pressure hot water. But there is no pressure in a manifold.
-PVC might leach plastic chemicals into the beer. YET I can find no actual reported case of this, except John Palmer suggests it as a potential source of chemical taste in beer. I boiled a piece of garden retic PVC for an hour, tasted the water. No chemical taste or smell. For a lot of organic compounds, the human nose can detect it at concentrations lower than a laboratory can.
-I know groundwater bores in the artesian basin in Queensland used for water supply are often cased with PVC and water temps can be 40 to 60 degrees, havent heard of problems from the people drinking it.

I have found a few US personal web sites where guys have used PVC for the manifold. But a search normally turns up an enormous number of posts saying dont, but without a hard reason.

So I am also interested what people think of PVC. Anyone got a good reason why not, other than most people say not to?

i want to do pvc mostly because i dont have any contacts when i comes to welding. PVC i can put together myself, easily.

I thought maybe i could "silicon" the copper. There's no pressure so no reason their should be too much stress on manifold

I have built a manifold in an esky using copper however I only pushed the fittings together. No solder, silicon etc. just held together by itself. If the copper tube is a bit loose I just SLIGHTLY squash the copper tube so that it is just off round which makes it a tight fit.

Simple and easy to make.

I know of a brewer who uses pvc garden retric tubing and elbows , had it for several years.
I posted on Grumpys once and got hammered ! Most say not to use it , try it and see

The manifold doesnt need to be tight or leak proof. If you had copper belled joins jou could just push together, if they leak its just another slot to help drain the grain bed.

I am not sure of copper because in large enough quantities it is toxic. I know that for the period of exposure, very little copper should leach, and lots of people and breweries use it, and there are plenty of houses with copper plumbing. But sparging is at a significantly lower pH than tap water and it is possible that some copper will leach.

A question for AG people. After sparging, is your copper manifold still dull and oxidised, or does it get shiny each time you use it? (ie has a little bit of copper gone into your beer?)

Big d has a piccy of his bazooka on this site
Mine is just the same , do a search on
'alterative false bottom'
J

I also only push the fittings together, slots cut in underside. Works well for me.

whats better bazooka or manifold.
They seem just as easy as each other to make. Is personal opinion the only difference between these?

What do people out there use?

You will probably find that most people have used either one or the other, but few will have tried both. Honestly, I think if there really was that big a difference between the two the difference would have been discovered and put to rest by now.

So once again an "opinion", do what is easiest for you and if your not happy with it you can change your design 6 months down the track when your bored and have nothing left to build for your brewery (is this possible :blink: ). Right at the moment it sounds like you have plenty of other things to do with your brewery and in my opinion the difference between one or the other will not be noticed.

Here is my bazooka. Works fine. 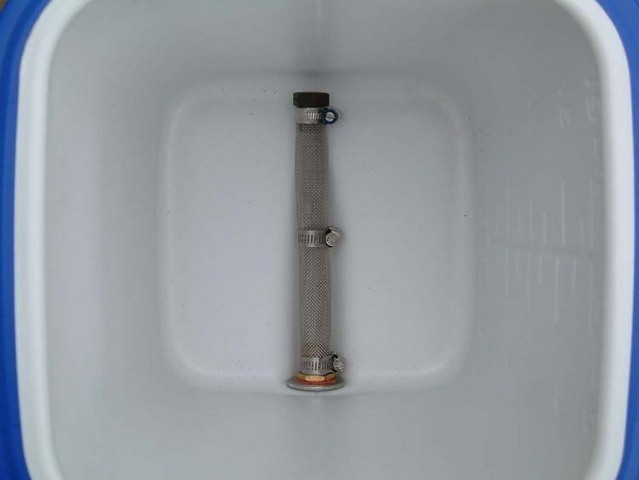 Batz , big d , justin
Bazooka club , all the most important people have bazookas

Yeah, did a 50% wheat first up, bit nervous having never tested it but ran like a dream and efficiency was fine. It was an identical recipe to the guy next to me who used a manifold and he came so close to a stuck sparge it wasn't funny. Only difference was he did a decoction and I didn't.

Not trying to say one way or the other. They both work.

Where do you get them and how much? What sized esky do you use? Are the tap fittings easy to come by?

At least that takes care of the bazooka puzzle for me.
That looks much better and easier to use than a manifold.
Doe it actually come out after use, or do you just clean it where it is?
Can you easily plug it so you can reuse your esky?
Does Palmer cover this?
I should read his book more But i'm always on this site.

manifold. so i just made the thing and have never used it, but its never let me down either!! ill post a pic because its soo pretty, and itll be my first chance to show it off
joe

I'm almost in both camps.
In my converted esky I use a manifold (see other similar topics on this site).

But I have a second converted keg that I'm using as a second boiler at the moment that I have a bazooka ready for that will be my mash tun when I convert my brewery to a RIMS or HERMS.

never use PVC, use the high temp PVC

my copper manifold is just push together, not soldered

I built my mash tun out of a Coleman beverage cooler, I got it for $55 at a 25% off sale at Allgoods. The rubbermaid or Igloo ones are about the $100 mark, BBQ's Galore stock a 19L Igloo for $95. These are a pretty good way to go because you can buy things already made for them like false bottoms but up to you. A small square esky is also a good option and usually cheaper that all of the above, but you would probably want a manifold to deal with the increased bottom area.

Johnno, the way my beverage cooler was built allowed me to not have to drill any holes to put my fittings through because once the tap was removed the hole was big enough, I even used the same washer that came with it. I can always just remove it and replace with the original tap but honestly I would be better off using the tap that I fitted for drinks anyway because it is better. I can just remove my bazooka by undoing the s/s hose clamp fitting at the tap end, it actually cleans out really easily.