How Much Zest For A Wit?

I know it has probably been asked before. Going to try and make one on wednesday.
A whole orange worth, two or more?
Anyone know why it neeeds to be dried?

If fresh, about half an orange worth. And be very very careful to not get any of the white pth in there, its as bitter as buggery.

I have a 15 month old wit sitting about here. Its still too bitter to drink. I added 2 fresh oranges worth of peel.
S

I used 25g of dried orange peel for one I did a while back. Wasn't till I tried a Hoegarden that I realised it could have used a bit more.

I am guessing that it is easier to get the "bitter" style of orange (is that seville or curacao) in dried form although my local fruiterer reckons they had fresh seville oranges for sale last winter.

Quite some time ago someone posted on this forum that you could get pellets
( the same as hop pellets) in the dried orange peel flavour.
I searched but couldn't find any in Adelaide.
I want to do a Saison and I am in the same quandary as to what orange to use and how much peel will I need for a 22 litre brew.
I any one knows if these pellets are available in Australia I would appreciate the info as to where to get them.
Cheers
D

I thought I posted this but it didn't show up.
Any ideas as to why it should be dried? Is just because thats how it is sold?

Hi all,
On the subject of Orange bitterness.
While still at high school, SA had a huge oversupply of Citrus fruits, ( it was the period when 2 dogs lemonade was first made). I was given a 20Kg bag of Navel organges, so I juiced them and threw in some yeast..my god that brew was so bitter and sour it was nasty, some of my friends loved it, and one actually still has a few long necks of it in his shed..

I can get chemically synthesised orange and banana flavoured concentrates (not fruit juice). I would prefer not to use it as a little goes a long way (one drop for 22 litres!

Darren said:
I know it has probably been asked before. Going to try and make one on wednesday.
A whole orange worth, two or more?
Anyone know why it neeeds to be dried?

I use 40 to 50g of dried peel in 23 litres. The coriander gives more of the orange flavour than the zest. The only reason I used dried peelis because that's how it comes from the asian supermarkets

The last Wit I made used the zest from 1 Valencia orange. I peeled it off with a potato peeler, ensuring that I got no pith.
Added in a hop bag with (gee, its been a while since I made a Wit. I had to check my brew journal) 21 g coriander seed, which was crushed with a meat mallet inside a closed ziplok...for the last 10 min of the boil. Yummmmmm!

Always happy with a wit.

The tip re Valencias is from an old Ausbeer mag and is courtesy of Eric Young.

Darren said:
I know it has probably been asked before. Going to try and make one on wednesday.
A whole orange worth, two or more?
Anyone know why it neeeds to be dried?

Darren, As Barfridge said I also believe that about half an orange worth is the amount to go with.
I have read that info just recently on one of the forums (might have been on Craftbrewers).
If I dont find any different info I think I will go with that amount.
It will be just what type of orange I will use.

I would say that the only reason dried peel is suggested is because that's how it's usually sold. Grumpy's suggest bitter marmalade as a substitute, which is not necessarily made with dried peel, so I would say you could use fresh peel if you liked. It may even help preserve some of the flavour, as drying would probably damage some of those flavour oils and compounds a bit.
J

I'm going to put down my first wit on the weekend, was wondering what a typical zest rate is? I was going to go with 1g/L finished beer of each fresh zest and indian coriander seed at flameout. I assume this would not be too much? Also adding (in a 25L batch) 20g chamomile flowers (dried), 10g cassia bark and 10g freshly grated nutmeg.

I use 20gms of orange peel and 20gms of coriander seeds and am happy with the results.

The orange flavour comes mostly from the coriander the peel should provide some bittering. Seville are best for this but hard to find.
You may want to substitute a tbsp of orange marmalade instead of peel, this works too.

Dave86 said:
I'm going to put down my first wit on the weekend, was wondering what a typical zest rate is? I was going to go with 1g/L finished beer of each fresh zest and indian coriander seed at flameout. I assume this would not be too much? Also adding (in a 25L batch) 20g chamomile flowers (dried), 10g cassia bark and 10g freshly grated nutmeg.

Hi Dave,
I just brewed a Wit 3 days ago ( 50 liter batch)
and I added 30 gramms of dried zest of seville orange(home made)
I also added 1/4 of a teaspoon of cinnamon,20 gramms of corriander seed and 5 gramms of cummin seeds, the last 2 slighty crushed in the mortar and pessel.
this was added 10 min before flame out.
the peel rehydrated very good in the boil,lots of flavour, was impressed.

tasting after 3 days orange flavour present ,so is the corriander , cummin cant recognize yet,
but would cut down on cinnamon next time I think as it very present.

I dont have a lot of experience with adding spices and flavours but feel that its easily overdone. 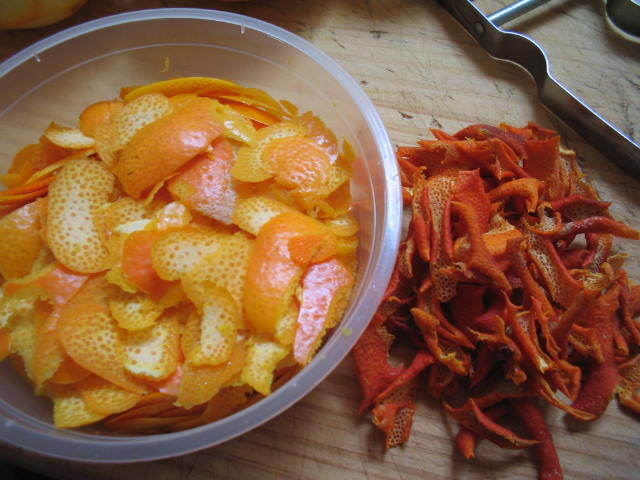 Dave86 said:
I'm going to put down my first wit on the weekend, was wondering what a typical zest rate is? I was going to go with 1g/L finished beer of each fresh zest and indian coriander seed at flameout. I assume this would not be too much? Also adding (in a 25L batch) 20g chamomile flowers (dried), 10g cassia bark and 10g freshly grated nutmeg.

I'd say all those spice additions are a bit much, especially the nutmeg. :blink: I'd say 1/2g/L of the coriander and zest, 10g chamomile maybe, no idea about the cassia bark, and I'm not sure that nutmeg would be good in this style. But then, if you have a vision, run with it. :beer: Great style for the summer. :chug:

The witbier style of the week thread was pretty long, and there's lots of good info in it on them. Link

In fact, after reading some of the info in that thread, it appears some people use 1g/L of coriander and orange, so what do I know. :lol:

Thanks for all the replies, I think you might be right about the nutmeg stuster, but for some reason I always wonder what it might contribute to a wit. Might just add 5g and see how noticeable it is. Might drop the orange peel and coriander to 20g this time and maybe ramp it up next time.

25L Batch using Navel oranges, 25g of zest, candied up a bit in an oven (just beyond drying it really) and 25g of fresh crushed coriander seeds. I've heard of people using up to 30g of zest and liking it.

The following is from an article on the brewery technical library on belgian styles...

Take from it what you will but they recommend the rate of 0.5 and 1 gram/liter of bitter orange peel.

Description
Phil's improved AHA listing: Cloudy yellow color, coriander flavor and mild acidity essential. Wheat and bitter orange peel flavors desirable. Mild hop flavor and aroma ok. Low to medium bitterness. Low to medium body, medium or higher carbonation. No <A href="http://brewery.org/brewery/library/mashtun/kleyn.html#diacetyl">diacetyl. Low to medium esters. These beers should be average in gravity with a definitely hazy yellow color and a dense, rich, dazzlingly white head. May or may not have a slightly orangey aroma (due primarily to the coriander), or mild hop aroma (preferably floral rather than spicy). Body should be medium or a bit lighter, and the carbonation should be reasonably aggressive. Bitterness should be low, mild acidity is allowed, but no alcohol flavor. Esters are ok, but shouldn't predominate. Should be very drinkable. I prefer my white beers with lots of coriander.


All grain brews should use 50% barley malt and 50% unmalted raw wheat, although a small percentage of oats (5-10%) can be used to add some silkiness. Extended protein rests (45 mins-1 hour) are needed to keep the mash from turning into glue and to allow sparging, but excessive rests cause unwanted clarity in the finished beer. Almost any yeast seems to work, so people should get credit for creative choices. Since hop levels are low, the variety is relatively unimportant. Classic varieties like Hallertau, Saaz and East Kent Goldings are common for bittering. Brewers should be aware that grinding raw wheat by hand is excruciating; find someone with a mechanized mill.

Coriander in the boil is essential: use 1 gram or more per liter of finished beer, boiled for 5 minutes or so. Coarsely ground whole coriander and boils over 15 minutes result in low coriander flavor. Curaao (bitter) orange peel is also traditional, in amounts between 0.5 and 1 gram/liter. The peel can be boiled for longer if desired, up to about 1/2 hour. It contributes a rich herbal flavor similar to herb tea, and does not taste of orange.

Some homebrewers add lactic acid at bottling, which contributes acidity and helps bring out the other flavors. Amounts up to 1 cl/liter can be ok if given adequate time for the flavors to blend usually 1-2 months. Extract brewers will have a hard time getting the right haze, but otherwise are at no disadvantage.