Doc's Beer Tour of NZ
Officially in NZ for two weddings and to catch up with family, I couldn't resist the opportunity to re-familiarize myself with the beers of NZ.
So here is a quick list of the beers I tracked down in the 2 1/2 weeks etc

Harringtons http://www.harringtonsbrewery.co.nz
Wheat, Big John, Winter Warmer, 1st Summer Ale, Stout, Porter, Hercules, Special Bitter, Wobbly Boot, Special Reserve
Harringtons also are about to release their low alcohol Lord of the Rings Beer named Sobering. Had a chat with Craig the brewer and owner of Harringtons in Richmond, Nelson and he showed me the artwork for the bottles etc. He was quite excited about it (a 1% beer) as he is hoping to also get it brewed under license in Australia and the US.
They also brewed their Stout as an official Lord of the Rings beer and it is very nice. I've obtained the particulars for that beer and will be brewing it this weekend.

Dominion Breweries http://dbbreweries.co.nz
Tui (It was the only beer they sold at the rugby)

Other
A $6 a dozen beer that my father had in the fridge. Not even worth mentioning the name

Highlight(s)
Getting a personalised tour of Shed 22 Brewing (Wellington Brewery) on brew day. Saw the end of their first brew and the start of their second. Had a great chat to the brewers and had a taste of one of their beers direct from secondary and some of their others in the staff bar. An awesome day.
Visiting the NZ Hop board and picking up some hop pellets for brewing when I get back home.

Lowlight(s)
Getting down 330ml of the cheap $6 a dozen beer my father had in the fridge when I arrived at my parents place.
Closely followed by the only beer on offer at the Wellington WestpacTrust Stadium being Tui. Although the Hurricanes didn't lose. a 26-all draw.

Best Beers
Best NZ beers I tried would have to go to in no particular order to Mac's Copperhop, Monteiths Kristal Weizen and Wellington Brewing Company's Sorcey Spellbinder.
Mac's Copperhop because it has a great hop aroma and is a great tasting Pale Ale. They claim it is a three malt beer with a late addition of five hop variaties. Truely a great beer.
Montieths Kristal Weizen. Only released on the 28th of March and I managed to track some down before I left. A Kristal Wheat beer on par with the best Kristal Wheat beers from Germany.
The Shed 22 Sorcey Spellbinder is a unique beer. Not brewed with hops but bittered with Juniper berries, Yarrow and Wild Rosemary. Brewed for the Lord of the Rings explosion in NZ this is a fantastic well balanced interesting beer that I would drink again anywhere.

Beers I Missed
There were a few beers I wanted to try that I was unable to track down. Namely the Emerson and Limburg beers from Otago and Hawkes Bay respectively. Will have to hunt them down on the next trip. Also I ran out of time at the Wellington Brewing Company. Would love to have tried their Wicked Blonde and Sassy Red. Did score the brew data sheets with the spec's for each of their beers though so will have to brew them myself until I can return.

Beers I Avoided
On purpose I avoided DB Draught, DB Bitter, DB Export, Lion Red, Steinlager etc etc. It is not hard to find beer in NZ anymore. They sell it in Supermarkets and Star Marts and some corner shops as well as at the usual outlets like bottleshops. So there is no excuse to have to drink the big brands because that is all you could find.

Edit: Got in a couple more beers at the Wellington Brewing Company on my stopover in Wellington today on the way home.

I also have a whole bunch of photos that I will post when I get back onto broadband.

thanks for the roundup doc. always good to hear about beer from abroad.
joe
G

What was the atmosphere like at the cake tin? (Apart from the Tui). I'm an ex Wellington boy but havent been to the new stadium yet. Nice to see the hurricanes get a win at the weekend.

Is Monteiths better in NZ than it is in the bottle over here? So far I've found the black, the red, and the summer orange one, none were that impressive IMHO.

Got to agree with you about Mac's Copperhop. Its a damn nice APA. I still prefer little creatures though I think it has more malt character. You probably got much fresher bottles than me though.

Do Shed 22 bottle their beer?

You really did miss out in regards to the Emersons range. Their organic pilsner is supposed to be brilliant. I tried the Whiskey Porter last week and it was unreal.

Nice one Doc.
Was that a brewery holiday or a family catch up one :lol:
cheers

Looks like you had a good time Doc. What hops did you bring back BTW?

Yes definitely missed a couple of good ones. Will be back over end of May so will track them down then.
Shed 22 only keg their beers at the moment. They have entered in the International Beer Awards in Melbourne this year so if you get along to that you could try them.

A bit of both. Two weddings, no funerals and about four breweries

Picked up Nelson Sauvin, Green Bullet, Hallertau, Hallertau Aroma, Czech Saaz and Super Alpha.
Got them all through customs fine.

This is Mac's Brewery pilot beer system.
Some great equipment here. Apparently it was built by one of the engineers at the brewery.
Would look great in my brewery 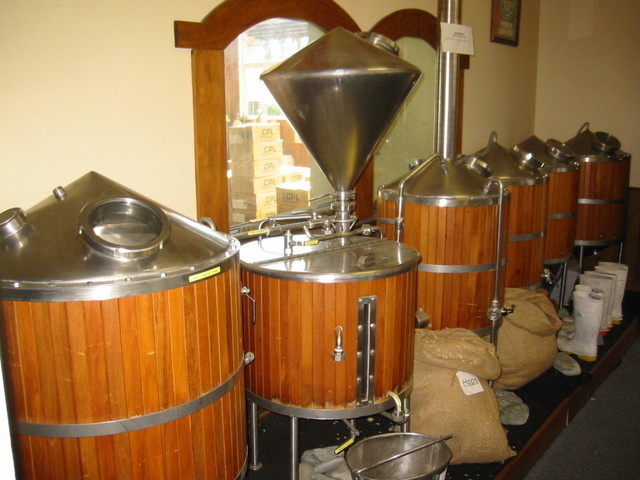 A close up of the HLT, Mash tun and boiler. 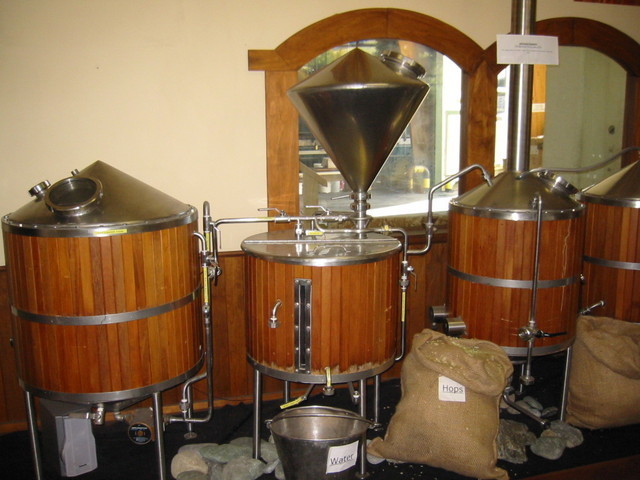 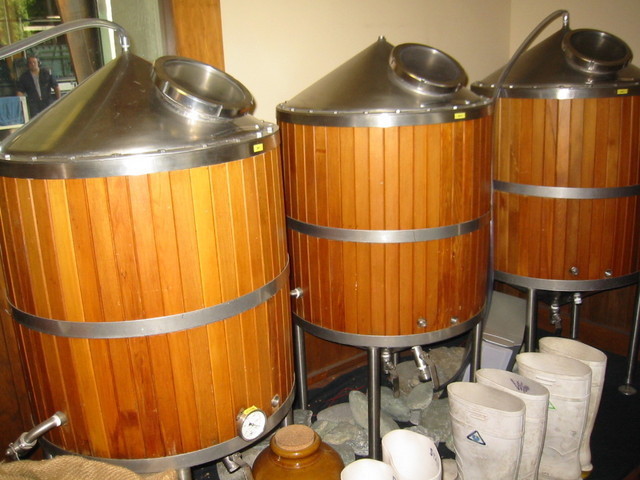 On a much larger scale here is the production equipment at Wellington Brewing Company (Shed 22) where I was lucky enough to get to spend a couple of hours with the brewers on brewday. 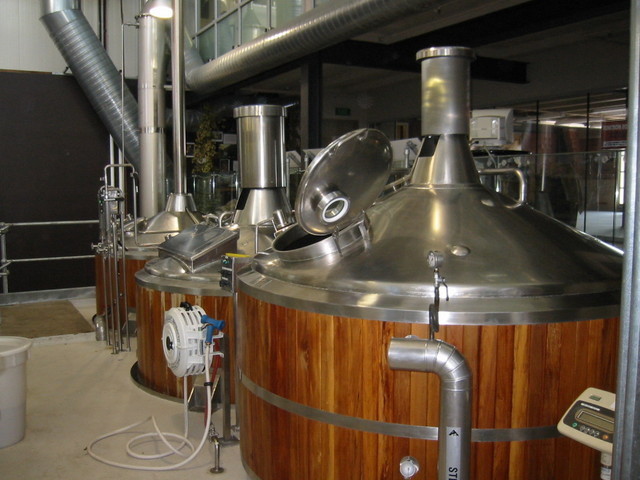 Looking back from the other angle. The large conical at the end holds the grain. 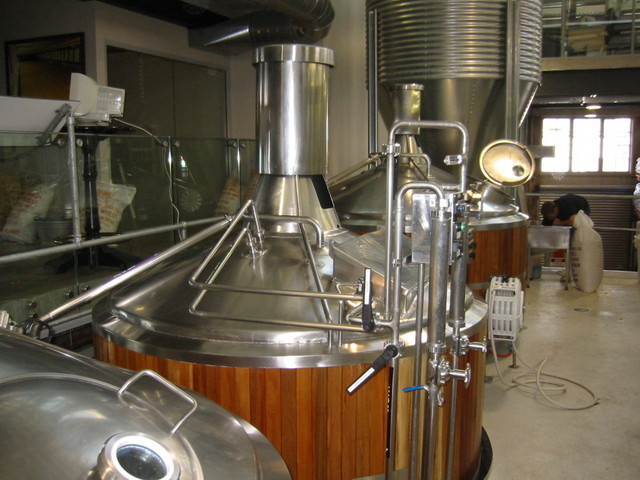 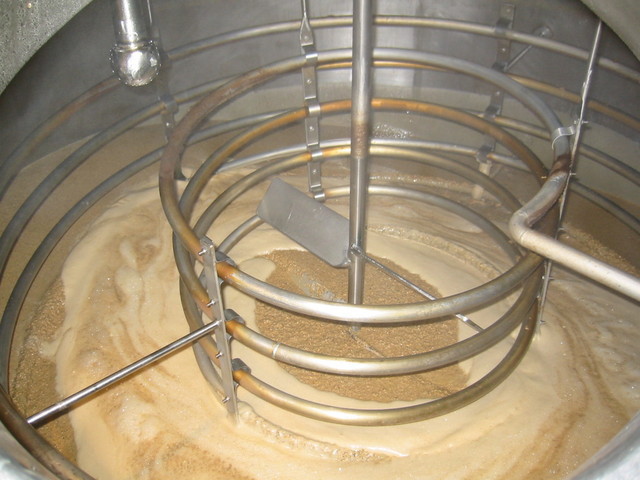 Stainless steel and polished wood always gets me excited

Nice work Doc. Great Pics
How do you guys always end up getting personal tours of breweries? Is it as easy as being forward enough to ask?

Bascially Boots it comes down to one of two things.
Either you know someone that knows someone, or you are just forward in asking. Brewers tend to be the nicest guys. You just have to ask, you have nothing to lose.
However it doesn't always workout that way.
Before I left for NZ I emailed two breweries asking to come along on brew day. I got a response from one saying I could do their tour and didn't even get a reply from the other.
I got into Wellington Brewing Company via a mate. They had a tasting on the Wednesday and I wasn't arriving until the Thursday. A mate of mine went along and got chatting to the head brewer. Bingo, I was in for brewday on the Friday when I was in town.
Likewise at another brewery. I didn't know my father knew the owner. We had gone to the brewery to buy some beer, and the owner came out. They started chatting, then I asked a couple of educated questions. Then Bingo. A great chat and all the info you ever wanted.

I pays to ask.

Cool, I'll have to learn to not be backward about being forward. I was beginning to wonder if I was the only person who didn't know somebody at a brewery!!

We drank these beers -