Trouble brewing over beer contest
Despite being named Beer, and making her own brew, a New Zealand woman has been prohibited from entering a home-brew beer contest because she's not a man.
Rachel Beer, who makes a brew named "Beer's Beer," was shocked to be told a home-brew competition at an A&P show -- an event that combines agricultural and entertainment events -- on Saturday was a male-only competition, the New Zealand Herald reported.
Beer was told by the chief steward of the event, held at Lake Hayes in the central South Island near Queenstown, that she could enter her tipple, but it wouldn't be judged.
"There's no point entering a beer if it's not going to be judged whether it's gold or mud," the 36-year-old said, adding that it was time the organisers of the event changed the rules to "meet modern times."
Show president Mike Smith said he was not aware there was a brewing contest at the annual event, and suggested Beer put forward a proposal for a women's or mixed section next year.
The president of the Brewers' Guild of New Zealand, Ralph Bungard, said the rule was ridiculous because traditionally it was a woman's job to brew the beer, just as it was to bake the bread. "It was a very female profession," he said.

This is interesting as New Zealand was the first country to give women the vote in modern times through women's suffrage. But they're not allowed to have one of their home brewed beers judged in a comp. wtf...

there behind the times..some of the best micro brewer's are women..

HB so good, it will raise the dead

Sandra sully with the late news. Thread on this was.done yesterday or Friday 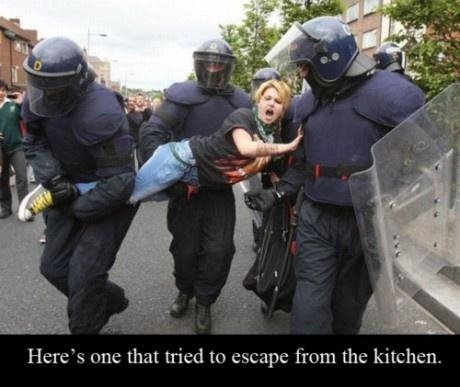