TO ALL: Matt here.
-We have FINALLY sorted through a couple hundred pieces of equipment and have the following available: Cornelius "Vanguard" table top soda (beer) dispensers. Self refrigerating via an ice bank. Four or five taps. Can run non cooled kegs and have output temp of 33^F. Can run beer lines from any location away from unit. 110Vac.
-There are 3 units with five taps and 4 units with four taps
-Can fit FOUR per pallet. Uses either 134A or R12 refrigerant.

-It would be most economical to ship all four to one location then picked up or reshipped from there.

-Someone down there needs to find out if there is any Customs PROHIBITION regarding the importation of equipment that has R12 refrigerant (since the enviro-Natzi Montreal Convention took effect...ONLY Western Nations can't use it but the rest of the World still CAN.....all to "save" the environment?) 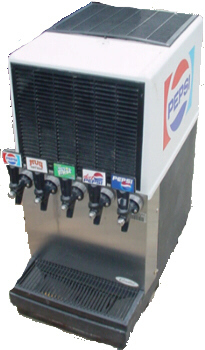 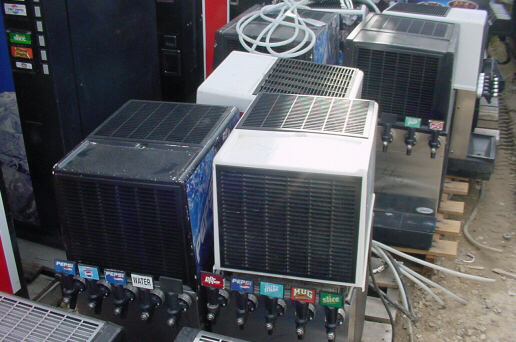 Oh the tyranny of distance.

what is the freight to aus on them - please quote on 1 item and on four...

still have not received my 4 kegs yet....

mchitiea said:
-Someone down there needs to find out if there is any Customs PROHIBITION regarding the importation of equipment that has R12 refrigerant (since the enviro-Natzi Montreal Convention took effect...ONLY Western Nations can't use it but the rest of the World still CAN.....all to "save" the environment?)

Someone like Timmy or Ausdb would know, but I suspect R12 aka dichlorodifluoromethane is going to be a problem as I think Australia is a signatory to the Montreal protocol? Add that hassle to the 110 v transformer and I'd be wary. But I still think it would be pretty ccol to have an oatmeal stout connected to the pepsi dispenser in my bar when I finish it. So once you sort out all the hassles Ken, let me know.

GL is right; we signed Montreal, and R12 is a CFC. There are guidelines that say you can import goods that contain a controlled substance (ie CFC) for your own personal use, however you would need to seek approval from the Commonwealth Department of Environment and Heritage (DEH) to import the goods. Customs wouldn't release such goods until DEH has authorised the importation. In reality however, a requirement has come into force (in April 2004) that means you would have to apply for a pre-charged equipment licence for any gear containing HFC or HCFC. This has a non-refundable fee of $3K. Now I know that R12 is a CFC, and not a HFC or HCFC, but my dealings with DEH suggest thath they would try slap you with this licence requirement. If you fought it, you might win, but DEH are a pain in the date to deal with, and I suspect this would cost you time, money, and sanity.

However, 134a is kosher in Australia, as it is not ozone depleting. Wouldn't be a customs issue from a greenie perspective. But you might still have to deal with customs

An off-the-peg 120W stepdown transformer is $90 from Jaycar - you could convert them for less if you knew what you were doing. Least of the problems by the sound of it...
G

Hehe I like the way you think... actually, you could put 16 of them in series/parallel...

might be interested in picking one of these 4 up (assuming you get a pallet of 4) depending what the postage works out to be and there is no dramas getting it into the country/converted to rt134a.
T

I'd be interested in one if any issues with gas could be sorted out.

I will follow up on the legal aspects of trying to import R12 charged equipment at work today if I get a moment. I would say that it would have to be converted before it gets to Oz though, which is going to cost dollars.

As for the 110V issue, if the compressor is a 110V one the you would need a goodly sized stepdown transformer which the 120W one from Jaycar may not do the job, it depends on the starting current of the compressor. Alternately it may have a 220V compressor in it which you could get running a bit easier but you would probably find it would die sooner as our mains tends to be ~240V. If someone can dig up a service manual for the machine it could be looked at though.
Cheers

ausdb, provided the power consumption of the unit is within 120W the Jaycar transformer will be fine - it is a simple autotransformer with no regulation or electronics so it won't freak out by the momentary overcurrent on starting.

Personally I think it sounds like the gas is a much bigger problem, assuming ant's advice is good. It might be necessary to get them regassed in the US of A with an acceptable refrigerant. This isn't especially expensive but it does add to the unit cost and it would depend on Matt's preparedness to get involved and find someone to do it.

From what I've heard, Aussie customs are actually quite reasonable, and few things attract more than 10% duty anyway. Might be worth a quick phone call to find out if there are any special clauses regarding these.

Wortgames said:
ausdb, provided the power consumption of the unit is within 120W the Jaycar transformer will be fine - it is a simple autotransformer with no regulation or electronics so it won't freak out by the momentary overcurrent on starting.

Looks like you are going to need some sort of heavy duty stepdown transformer!

As far as refrigerant goes I would forget it unless you can spec R134A ones. R12 -R134A conversions are not always that straightforward as the oils are different, and a system designed for R12 tends to be a bit undercondensed when run with R134A. There are other 'drop-in' alternatives to R12 but I would say the cost of doing it would start blowing things out.

If you really want some sort of instantaneous chiller device keep an eye out for a small glycol/ice bank chiller which they use for beer serving these days. The Vanguard units are basically one of those (ice bank refrigeration with beverage coils inside) and you wouldn't have to worry about all of the post mix stuff which you will end up throwing away anyway

That would have to be peak startup current ausdb - otherwise you're talking nearly 2kW!!!

Guys, there are 2 key issues for you. Since April 2004 you need to apply for a license to import ANY refrigeration equipment - including aircon on cars. Both R12 and R22 are a no-no even though R22 still has a number of years to run here in Australia. We have stopped inporting any chiller equipment because of this.

The voltage issue is not the worry with the power thing. The frequency - 60Hz versus our 50Hz is a show stopper. The compressors will simply not work properly on 50Hz.

Assuming the 230V unit is available, it appears that the viability of the gas conversion will be the make or break of these.

Wortgames, if these units were built for the US market, they will be 110 volt/60 hz. That spec for the 230 volt model would be a different unit with dual current compatability. If they have them, go for it. BTW, these units pull a fair bit of power. the 230 volt unit pulls 7.5 amps - thats 1.7kw.

To all,
-I will survey the units to see how many are R134A. Most all of these units have been through Pepsi's refurbishment process w/in the last 2-4 years. During that time they have been converted to the 134a.
-Conversion of remaining R12 units to 134a is no problem here.
-Power conversion: These units use the same compressor as the Soda Vending Machines we export. We have sent 100s of machines to Europe, Israel and Egypt. I will try to find out what transformer those buyers use to convert to their 220/240V 50Htz power grid.
-Power consumption: With "Ice bank" units, they do not run constantly. Once the ice bank is fully formed (approx. 24hrs of run time) the compressor does not run but once every day or two for a couple of hours, to reform the outer dimensions of the ice block.
-Coolness factor: Admittedly there are cheaper ways to dispense beer. The advantage of these is their "Coolness Factor", the "Gee-Whiz that's neat" thing.....