I have found myself buying this beer as a 'take along to BBQ' drink, and really like the malt and hop ballance with notes of blackcurrent and burnt sugar. Goes really well with food. So after reading up their speel on the net and a few bottles to taste and evaluate, i came up with this. I did a side by side that i will elaborate on in the related thread, but i actually think its better! Lovin' the Pacific Gem!
1.044, 22 IBU 21 EBC
mash in 2L/kg for 10 min @ 52 deg
Infuse up to 66 deg for 60 min
Infuse up to 72 deg for 10 min and mash out at this.
Ferment with a nice dryish english ale yeast at about 20 deg.

here are some comparison Photos:

Mine is on the Right..... its a touch lighter. Promash said colour would be 21 EBC but the AHB recipe database says 27. Mine is more like 21 and id say the origional is closer to 25 ot 27 EBC. Close enough 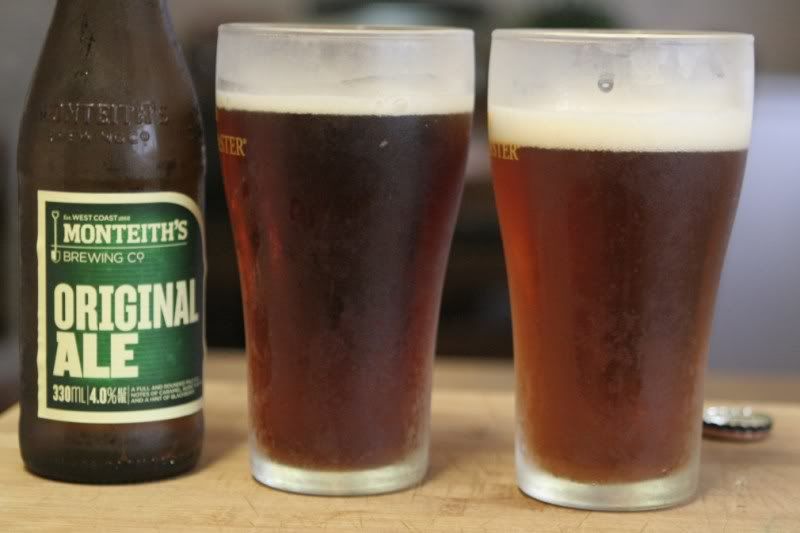 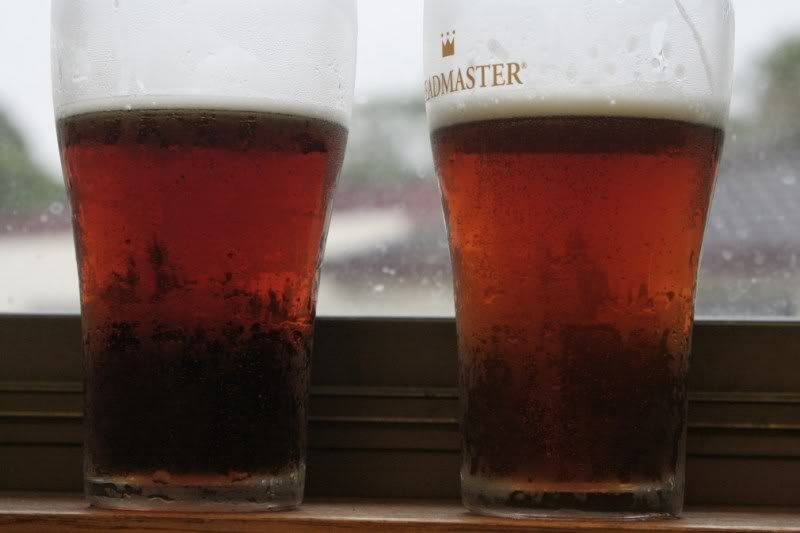 Mine deffinately held a better head! 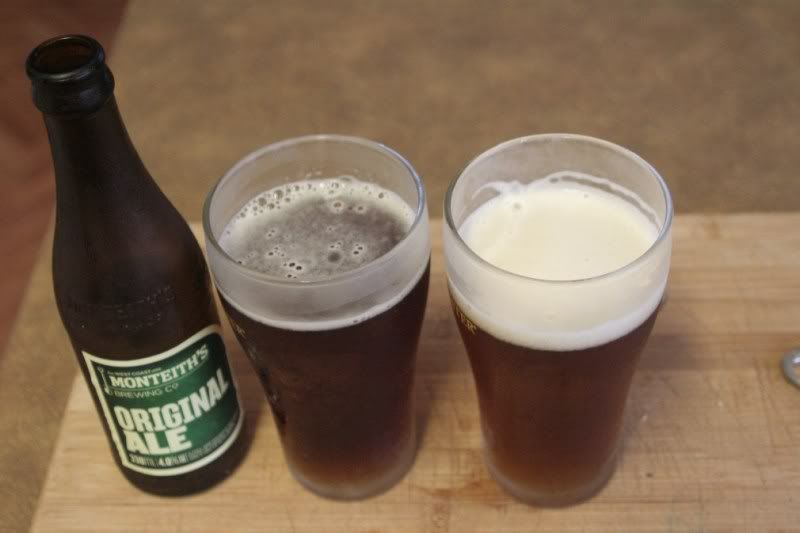 But its all in the taste isnt it.

Mine was smoother, creamier, rounder in the finnish. Slightly more hop character. They both had the same burnt sugar and black current finnish, but the real thing had a touch of that "VB" mousy yeast funk, which suprised me. I hadnt noticed it before. Perhaps just a bit of mistreatment in transit id say but im wondering if i didnt notice it before cause i didnt have a side by side to try it with?

The Montheiths effort was a bit thinner too. Sort of a wateriness compared to mine, whic is in no way a heavy full boddied beer. Perhaps to get closser Pils would be a better base malt.

But to be honest..... my effort is very close and if its better, why change it

I'm also a fan of this beer as a lowish abv chugger... in your opinion how integral are the pacific gem hops?

not being a smart arse here....but what do you mean by intigral?

Are you wondering how important Pacific Gem is towards the character of the beer?

Cheers - laziness on my behalf. I guess it has never struck me as a particularly hoppy beer and thought I might be able to knock it out later this week without them specifically. If they are listed upfront like that though they must play a fair role...I might grab another 6 pack of it and re-evaluate my memory/palate for it. Thanks mate, sorry.

dont be sorry.....no such thing as a silly question

Mine is a bit hoppier than the commercial one but the hoppiness really hides behind the dark caramel and burnt sugar you get from dark crystal malt. Its a deep dark fruit kind of hoppiness and doesnt really stick out like a brighter floral hop would.

But to be honnest, it really works. The flavours compliment each other and its a very easy drinking beer.

Ive had a couple people try mine and they say the same thing..... Ooooo thats different, but its good too

Tony said:
the hoppiness really hides behind the dark caramel and burnt sugar you get from dark crystal malt. Its a deep dark fruit kind of hoppiness and doesnt really stick out like a brighter floral hop would.
Click to expand...

That'd be it - Looks like the 2kg of hops in the fridge need to take some time out while I order in some pacific gem haha! Cheers :icon_cheers:

Pacific Gem is a great hop. Pacific Jade is less so.

Tony, looks great! This is one of my favourite beers so definitely keen to give this a go!

I am only kicking off with my first AG on Tuesday with BIAB in an Urn.... What would you suggest as a mash schedule with BIAB in an Urn for this brew? Sorry, just not too sure what the "Infuse" steps are in your instructions :blink:

I would definitely agree that yours looks to top the original by the picks!

I checked my records and i played with the recipe after i made it and upped the bitterness to more in line with an english bitter to see how much more hops it would take.

I have edited the recipe to reflect the true amounts and bitterness... which is 21 to 22, same as what the website says it should be.

Keen to hear your thoughts on the below recipe... I have played around with it in Beersmith to try and scale it down to BIAB in an Urn.... Would be great to receive any feedback re any changes you would suggest.


I have added my beersmith file image and the grains I will get from Craftbrewer.... I couldn't find the Bairds Light Chocolate Malt so have subbed in Chocolate Malt Pale (Thomas Fawcett)... Should this work?

Also, re Mash Schedule what would you suggest?

Cheers for your help.. Camo 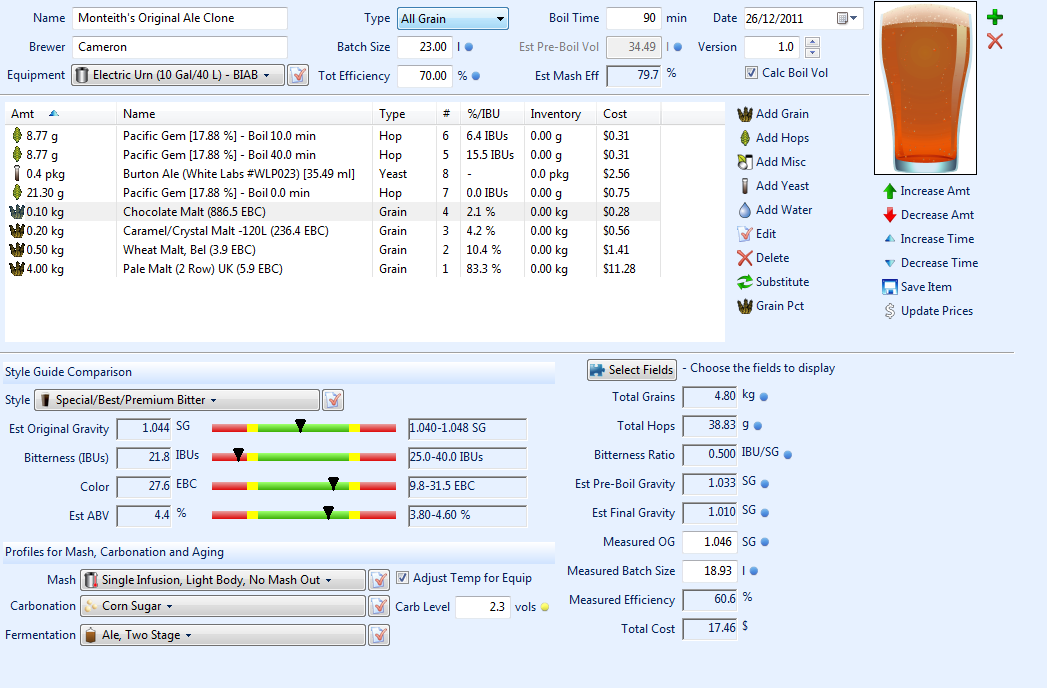 I put a mash schedule in the recipe description i think

I put a mash schedule in the recipe description i think

Hey Tony, one last question... Flowers or Pellets? I am ordering my ingrediants from CB and the flowers listed are 2005 crop whereas the pellets are 2010 crop..... I haven't used flowers before so just wondering what your thoughts are regarding which to go for given the difference in age of the flowers?

I used flowers but either will do. Flowers just add that touch of creaminess i think but if your kettle doesnt have some sort of false bottom to keep them out of the pickup..... use pellets!

Edit: If your buying from CB, the hop flowers will have been cold stored and vac sealed so they will be as fresh as the day they were picked. Its exposure to air that kills them. Its the 05 crop flowers i used and they were still sticky and smelt awsome!

Hey Tony - thanks for the recipe.

Would you suggest S04 or Notto or should I really track down a liquid yeast?

Just a note for the other Pacific Gem lovers on this forum, i grabbed some of Nige's organic crop (08?) and i was blown away by the aroma they gave off.
Having used Gem in the past.... just highlighted how good this crop was.

tiprya said:
Hey Tony - thanks for the recipe.

Would you suggest S04 or Notto or should I really track down a liquid yeast?
Click to expand...

Mmmm SO-4 is a bit of a low anteuator and hop scrubber so i wouldnt use that
Noto......maybe...... but the thought doesnt get my juices flowing.

I was about to say perhaps a blend of both if you must use a dry but then i remembered this:

No affiliation and never used it but from what i have read i recon it would work.

I used the WLP023 burton ale cause i had it on hand and it needed to be used but any of these yeasts will make a great beer.

Cheers Tony, I've got some 1084 so I might use that or try and grab something else.
C

No affiliation and never used it but from what i have read i recon it would work.
Click to expand...

This is what I am going to use... Brew day this weekend :icon_cheers:

has anyone had a shot at this yet?