The 170th Munich Oktoberfest started at the weekend.
Wishing I was there I was checking out the pictures and stuff from the site.
Ah the memories.

Check out some of the pictures. 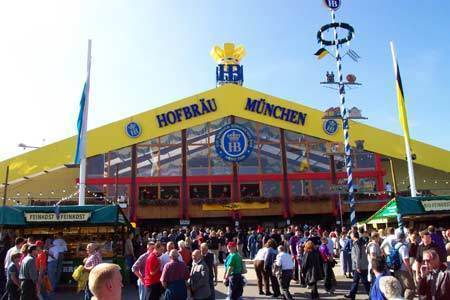 Inside one of the beer tents. 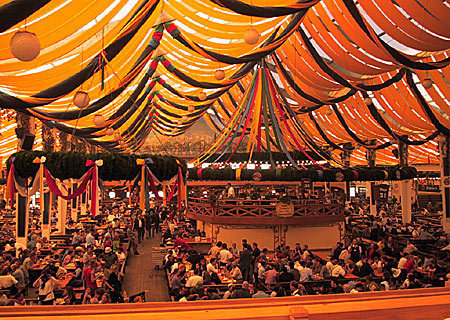 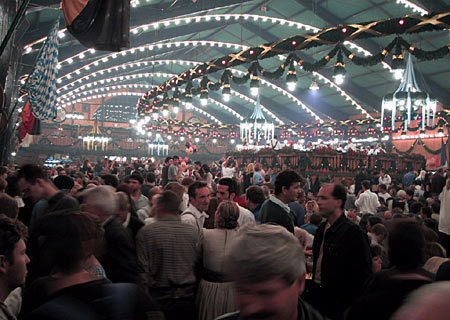 We just had the Brisbane National Festival of Beers on the weekend. Although the beer was good, then venue was crap and the music was worse. It just pales into insignificance to those Munchen Beer Halls.

For anyone who's interested, my pick of the beers were:

And the worst beer I had? The Wig & Pen's Wobbly Boot Smokey Hefe-Weizen. This beer has cured me of any desire to brew with smoked malt!

Nearly and Bunz were both there with me. Perhaps they would care to give their assessment of the festival?

I tried the "Wobbly Boot Smokey Hefe-Weizen" when I was down in Canberra last and I didn't think it was that bad, but I could hardly detect the smokey flavour at all. Maybe I had a bad (good?) one.

It just tasted like a really good Dark Wheat beer to me.

Did they have the Wig And Pens Abbey Beer available? "Brother Abbots Golden Ale" (or something like that). Now THAT was one hell of a beer!

Doc said:
The 170th Munich Oktoberfest started at the weekend.
Wishing I was there I was checking out the pictures and stuff from the site.
Ah the memories.
Click to expand...

When did you go Doc?

The '89 session made our ones here look like english tea
parties!!

How about the wirey beer maidens tossing stein after stein
of lager down the wooden benches...A magical session that
is seared into the deepest recesses of my steadily decaying
mind!

I bought one Octoberfest glass stein and picked up a lidded
ceramic beer stein (and obligatory cuckoo clock from
Oberramergau in Austria (where they do the passion play)!

Will try to post a piccie of the stein when I get my hands on
the digi camera again.

I was there for opening weekend in '96.

I almost made it back last year (there was a conference in Munich starting the week after opening weekend), on company time and money. Alas it wasn't to be.

I got some good steins from Germany when I was there as well.

The beer frauleins were great. Strong as ox's.

My only downside from the trip was getting food poisoning from one of the roast chickens on my last day. Took a couple of days for it to set in, so when I got back to London I was getting real crook.
Then by the time I got back to NZ via Hong Kong I was almost dead.

Would love to get back there though (except no chickens next time).

Coopers homebrewing was there and I was keen to try their wares. Because if anyone should be able to get their methods and ingredients right it should be them. Shouldn't it? So why did they insist on kit and kilo, even using cane sugar? Yes it appeals to the lowest common denominator, but with just the slightest of effort, they could have been showcasing homebrew which is a least the equivalent of many beers. Disappointing.

I have to admit that after the first half dozen different beers my palate had lost a lot of its ability, but thats when we changed strategies from quality to quantity! :chug:

bunz
coopers has me beat.i dunno if there trying to introduce people to the great joy of home brewing then loose them again straight away or what.you would think they would add an extra in there instructions on how to go further in home brewing with malts hops etc.
nevermind they still have a great product that as a home brew product just requires a bit more tweeking.

coopers have said they only get people started.the rest is up to the brew shops etc.
but you still would think they would mention somewhere that the use of malt extract instead of sugar will improve the final product.


with the h.b oktober fest beer i was dissapointed with it.and the dortmunder was the same.but the festival would be awesome.

I agree, Bunz. The only thing Coopers were trying to do was show everybody how not to brew with a kit. They would have had people coming up thinking...I wonder if homebrewing has gotten any better since I tried it back in Uni?.....then drinking the Coopers product and saying "nope!"

Wasabi, that smokey hefe-weizen tasted like bacon, and not in a good way. I felt like I should have poured it over some eggs. Unfortunately the Abbey beer wasn't on offer.

Don't despair. There is a link to a live webcam of the Oktoberfest at http://www.webcam-index.com/Europe/Germany/

(Edit: Have a go at the wimp on the left with the wrist strap :lol: ) 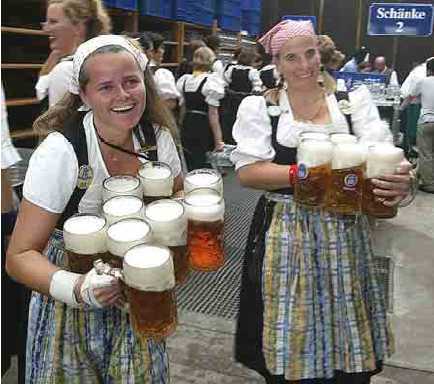 If that was me mate, I'd be standing in the queue with empties!! :lol:

If my timing is right, and all goes to plan, I should be in Wales for Rally GB 04, then Munich for Oktoberfest (I dont think I'll make it to the opening night though )

Opening weekend for the Oktobefest 2004 is this weekend.
Anyone know if Kook is going to make it ?

MUNICH, Germany (Wireless Flash) -- Folks around Munich, Germany, are warming up their beer bellies in anticipation of this year's Oktoberfest, which kicks off Saturday (Sep. 18).

The 16-day celebration of beer, bratwurst and brouhahas commemorates the 1810 wedding of Bavarian prince Ludwig I, and takes place on the grounds of that five-day festival.

According to the honchos at Paulaner beer -- one of the six brews served at the first Oktoberfest -- more than 6 million people will attend this year's festival, guzzling nine million liters of beer.

Twelve-thousand workers -- including stein-slinging waitresses -- will labor to serve guests at 14 tents which hold up to 10,000 people.

It may sound strange to hold an Oktoberfest in September, but organizers do this to guarantee that chilly weather doesn't spoil the buzz for the revelers.
Click to expand...

Well he wasn't at Mondays WCB meet so hopefully that means he is in Europe!

Just realised I will be in France next week and am not going through Germany on the way home :angry: will have to plan better next time!
G

I don't know what it is but I love drinking out of steins. Especially on hot days. The problem is after the first couple you start to slow down and the beer gets warm. 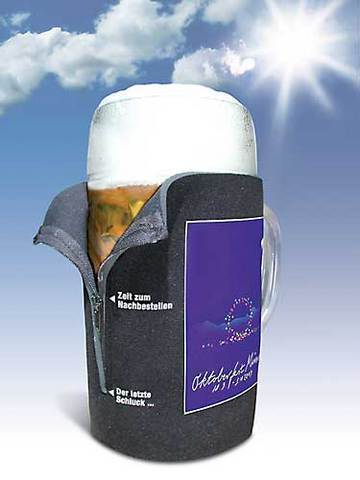