I've finally gotten ahold of my xmas present I gave myself, an Angram hand pump.

Within 5 minutes of getting the box open I had it set up pulling 20L of napisan solution through the lines followed by plenty of water for a good rinse. Yesterday I bottled and "bagged" some beer.

A bit of an explanation of cask ale is probably required for some people, skip over the next 2 paragraphs if you understand the principles and results. Simply put cask ale is ale that is served without adding C02 (or any other gas by artificial means) .This means that you cannot force carbonate beer, and it cannot be served under pressure from a bottle. This means that when the beer is poured/pulled you are sucking from the cask (think keg). You cannot keep pulling from a keg without something taking the place of the beer you have drawn from the keg. In a typical kegging setup this space is filled by the co2 delivered at a specific pressure from the regulator. With cask ale you suck beer from the cask using a diaphragm pump or simply gravity, which is a part of the "tap", as opposed to pushing the beer out with pressurised co2.

The difference between cask ale and kegging is not simply about how the beer gets from the keg/cask to the glass.Relative to pressurised keg systems cask ale tends to be served at warmer temperatures (about 10-13*c), it is less carbonated and is "alive", meaning the yeast is still active. This makes for quite a different drinking experience. Firstly the low carbonation levels make the beer smoother and less bitey. The Warmer temperatures bring out the malty flavours in the beer and generally make your taste buds more perceptive. The fact that the beer is "alive" doesn't really mean much for home brewers, but compared to macro brews it means the beer isn't filtered or pasturised leaving all the goodness.

The issue with Cask ale is that you need to allow air into the cask as you pull the beer. This leads to oxidation and beer generally going bad. Cask ale generally has a shelf life of about 3-5 days once you have tapped the cask because you start to let in nasties and oxygen. There are ways around this like using a sterile air filter where the cask takes in air, or using an aspirator which isn't really approved of to use co2 instead of air. The other option that has become more apparent recently is using collapsible casks, which are made from flexible plastics. This means that instead of sucking in air when the beer is pulled the container holding the beer collapses on itself. This means longer shelf life, but I'm not sure how long. I bought 18x 4L "beer bags". My main issue with keggins systems is that 19L kegs are the only economical choice. I value beer range over beer volume in a big way which is why I never decided to go for a "normal" kegging setup. With this setup I can bottle some beer and "cask/bag" some beer. Using 4L casks I can have a pretty quick turnover for the "regular drinker" and have bottles for when I want something different without having to take up a big fridge/keezer for corny's.

So my decision was to organise a hand pump and a number of 4L "polypins" or "cubitainers". as the storage vessel. I finally got all the parts together tonight and got everything put together and was pulling beer together a couple of hours later..

This story will continue tomorrow. The system works too well and after getting excited about pulling your own ales I can't continue to write a helpful and objective article. until then just know that it works.
[sharedmedia=gallery:albums:932]

Welcome to the hand pumpers. :beer:
Nev
B

If you don't mind me asking how much is one of these and where did you get it?

Nice set up! If air doesn't enter the bag can you still call it cask conditioned ale? I was thinking if using a 5l aluminium party keg but would need to modify it so air could replaced the extracted beer. Had a 4.5 gallon upright cask made for myself in England for parties complete with yr brewery name embossed on the side, can send the details if you are interested - tho postage to Oz would prob cost more than the cask!
B

Ahh tears sprang to these Pommy eyes. BCF sell collapsible 20L water containers that are basically like the UK polypins minus the cardboard box, I reckon they could be adapted - they are really cheap.
A firkin sized collapsible bag in box system was used by the Hull brewery (from whence Ringwood yeast was rescued and lives on) way back in the 1970s and I enjoyed many a session on their beers in Scarborough on holidays.

When I was in Wellington on a beer trip I noted that many of their hand pumped beers are out of a collapsible polypin as well. It would be great if these could be available in Australia as you can also just use them to serve beer on gravity. 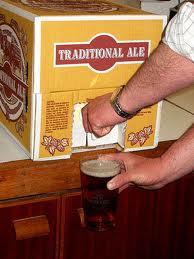 Here's a nice post and pic about using the water container option http://www.forum.realbeer.co.nz/forum/topics/beer-engine-beer-pump?commentId=1500433%3AComment%3A88268

The plastic bag is a definite "Must try"
Cheers Nev

I've seen a sweet camping/party set up using a modified caravan sink waterpump as the handpump along with the waterbag in an esky. An impressive portable set up for not many $$. It didn't have the bling factor that the Angram does though....
I reckon if you're starting with a new water bag it could probably do with a soak in water + bicarb soda to get rid of the plastic smell before it gets a beer fill.

I've tried the BCF camping bags, and while they work for short term storage (think fill from the keg to take to a party) I've found the taps leak slowly.

tilt said:
I've seen a sweet camping/party set up using a modified caravan sink waterpump as the handpump along with the waterbag in an esky. An impressive portable set up for not many $$. It didn't have the bling factor that the Angram does though....
I reckon if you're starting with a new water bag it could probably do with a soak in water + bicarb soda to get rid of the plastic smell before it gets a beer fill.
Click to expand...

You mean this? Story here

After having a look at the parts on fleabay, I've decided to make myself one of these until if have the cash to drop on a real beer engine
I found 10 litre collapsible water containers in the uk, and can get 2 over for about $30
Will report back once i get everything together

Dont forget to make a PDF with all the measurments and images, I am sure there will be interest.
Nev

I tried the cheap route before I bit the bullet. Terrible to be honest. Beer poured terribly, and most of the bits inside those taps are not made for acidic liquid like beer. Ymmv but I wouldn't bother.

tilt said:
I've seen a sweet camping/party set up using a modified caravan sink waterpump as the handpump along with the waterbag in an esky. An impressive portable set up for not many $$. It didn't have the bling factor that the Angram does though....
I reckon if you're starting with a new water bag it could probably do with a soak in water + bicarb soda to get rid of the plastic smell before it gets a beer fill.
Click to expand...

Why do you need to use the bags? I understand if you don't have kegs and/or you are going through a fair volume.

* storing the beer in a 19L keg with 5psi CO2 pressure
* pour off what I need for a session into a gallon demijohn etc - sometimes I pour only a pint off into a glass and pump from that to another pint
* then pump from the storage vessel used which you can get to the right temp etc.

I did this as I also didn't want to invest in CO2 breathers and all the setup for a permanent handpump system when I only wanted a few pints here and there. It is also totally portable.

I know it's not exactly traditional but effective none the less.

collapsible bags eliminate oxidation (atleast significantly reduce it), and there is no need for a co2 hook up at all

*ninja edit*
Not to mention you can sit the whole bag in your ferment fridge (if it's not being used at the time) and have it sitting at 10 degrees, just right for real ales

The only problem with the parts i can find is, the lever style pumps like in the BYO article are stupid expensive
i can only find plunger style pumps for around $35

Exactly. By the time you buy the its to build this, you're nearly half way to an actual beer engine!

Yeah, I currently run mine from a keg, just crack the pressure relief valve when I want to pour. Not ideal and the beer will oxidise, but I do give it a squirt of CO2 after I'm done.

I do have some of those collapsible containers, but I've found it quite difficult to get the correct size tube to smugly fit, and the fact that the spigot on these turns, can cause some issues.

Trying to work around it now, and I am in the process of building a dedicated bar just for the hand pump, complete with a bar fridge