Hi all
I've seen a few pictures of those 3 legged gas burners mainly on American sites I'd say.
Does anyone know if they are available here or something similar and if you can just connect them to your BBQ gas cylinder.
Cheers

I did'nt have any luck finding one of them Johnno , my supplys up here are limited
Went for cast iron 4 burner job get them at most camping stores , works well

I know for sure you can get them at Greensborough HBS. They look a pretty solid unit, finished OK. I imagine other HBS have them & also BBQ & camping places.

I use a turbo burner, does a good job.
Cost me $40 from the local hardware, compared to $70
from the camping suppliers!

Batz
What I've seen at camping stores so far i havent really been happy with but i cant say ive seen a cast iron one yet. Will let you know what i get.
Hmm ...KenEasy i wasnt aware of a HBS up that way. Do you have their name. Might give the grain and grape a call.
Turbo burners?
siiren do you reckon Bunnings might have these. I'll check my local on the weekend. Going to Bunnings right now to see what they have got.
Damn I hate having a limited budget.

My camping shop here in Newcastle has Turbo burners (iron w/3 small legs) for $16.95 on special, $18.50 regular price. Bought mine on the weekend at their sale. My HBS guy says that is less than he can buy them for wholesale before GST! Bargain. Maybe they can ship you one, even with freight it is going to be cheaper then the others. The shop is Coast Camping, Broadmeadow. Probably find their ph. in the yellow pages online, but if you are desperate I can find it for you.

I have been to the Greensborough shop its

I know the ones you mean.
The beasts like this one.

Well I couldn't readily find one and didn't have the cash to buy one either, so I got a three ring cast iron one from an army surplus supply store (thanks Linz) in Sydney for $45.

Works a treat, but if I find one of these (in the picture) and the price was right I'd be in. 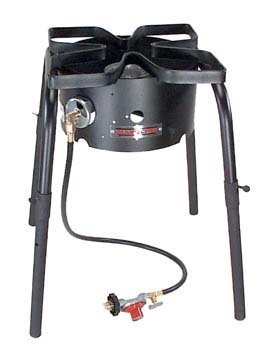 Rook beat me to it but that's the place. Give it a try, he's a nice guy who is sourcing an interesting range of hardware - boilers, burners, mash vessels etc. Plus the range of grain etc is good & fresh & he'll crush for you.

i got the cast iron 3 ring burner
brings 12L of wort to the boil in less than 20mins
im happy with that.
going to use it for my ag setup.
since the mash will be at 65-75deg C im sure the burner will be enough for a 30L boil in a similar amount of time

Yeah just went down to Bunnings but they didnt have anything like what I'm after.
Checked the army surplus store around the corner and they said they had a 2 burner cast iron but they couldnt fin it heheheh.
Oh well, 2 more army surplus stores in Russell St to check.
Doc,
That is excatly what i meant but looks like I'll have to go with the cast iron ones.
I'll ring Greensborough HBS and see what the cost is.
Gough,
Thanks for that info. I'm still in the looking around stage but that sounds like a very good price. Any chance of a pic?
Thanks for the info of the store rook.
It took me a long time to get hitched and I reckon it will take much longer getting unhitched. B)
h34r:

I have a cast iron three ring burner that is sufficient enough to bring a 50L boil in very reasonable time. Gets a good vigourous boil going. Very happy with it.

I have found the other burners that you guys are after in my local surplus store here-Uncle Sam's Surplus Store, Elizabeth St, Hobart. The same as the Yanks use and the same as the picture above, comes with the stand (no adjustable legs) but no reg. They are $59 but you need to have a high pressure regulator (not the BBQ ones) to get the power out of them. The stands are nice though, about the right size for a 50L keg. I have another bloke I brew with that has one, he fitted a regulator off an oxy-acetyl, it throws out the heat but by god does it chew the gas. He actually doesn't use it, instead uses his three ring burner.

If your talking about Russell st in the City, then do yourself a favor and go to the Vic Market , I have seen the 3 ring burners in one of the shops there.

Were in the city are you?

I also saw three ring burners in one of the surplus stores near JB HiFi in the city centre for $35. There are about three or four abong "Elizabeth St"???, the same street as JB and all the motorbike shops.

Ok rook
I'll have a look at Vic market. I didnt know they actually sell anything like that there.

I'm near the corner of Bourke and Swanston.

Elizabeth St in Melbourne I'm talking about in the post above. Damn cities with the same street names!!

Justin,
thats the one I was just at. They are relocating a few doors down so all their stuff is all over the place.
B)

Good Luck with it anyway.

Johnno, Justin or any other Victorians that work in the city , send me an email and we should met somewhere for a beer or 3.

Moving from K&K to AG