We have updated our TV and have no room for our old one. It is a Sony 130cm rear projection screen in perfect working order. It is 10 years old meaning it is "Analogue" so you will need a Digital Set top box to view Free to air TV.

Pick up from Lugarno, Sydney.......You will need a ute or truck and 2 guys to lift together with my help.
Free to first person who Pm's me. I'll happily accept a few bottles of your brew.

A few little mods and you could turn it into this!

How many kegs can it fit?
B

Not trashing the RP, which was good in its day (I was going to buy a DLP set just a few years ago) but man how things have moved on in the last few years. Just took delivery of a 42" full HD dynamic LED TV for $396 free delivery. Maybe you could donate it to a folk museum where they could display it along with Kodak Brownies and typewriters - seriously, it's the sort of thing they should be acquiring now - bugger the stockwhips and household items made from kero tins, if they don't start saving some of the current obsolete technology like slide rules and even tungsten light bulbs they will all end up in landfill.
K

Took a mid level DVD player in for repair about 12 months ago. The repair guy goes "give me a second" and goes out back then comes back with a brand new panasonic bluray player and points to his sign with his labour charges and tells me that its cheaper for me to buy the new bluray player than it was for me to have mine repaired.

Throw away society we live in...
B

Too true, a few days ago I fired up one of my Kegmate fridges to take a fermenter for lagering. The lights came on, the display at the front reported accurately, but the motor wouldn't switch on. I tossed up the idea of getting a fridge mech out, but really it was going to cost me probably a hundred for a callout and inspection, then parts (if you can get switches and compressors etc for these Apache type kegmates) - wait for the parts from Hong Kong or America, then ......

Wow just too hard and probably cheaper to bite the bullet and pay a mere $400 from Ross and get one shipped down to Taree.

Then the motor kicked in, probably just a compressor thing as it had been fermenting on 18 and I'd switched it from fridgmate for fermenting to running "native" for lagering so it was having one of its little pauses.

But for a few moments the idea of just junking the thing wasn't far fetched. <_<

Still using a 2007 Pioneer LX608 here which cost 8K back then. Still not seen anything that can touch it for picture quality

Tropical_Brews said:
Still using a 2007 Pioneer LX608 here which cost 8K back then. Still not seen anything that can touch it for picture quality
Click to expand...

I used to sell those early pioneers back when they would set you back close to 10k and came with 12 months of support that came damned close to a "happy ending" Probably in about 2003 or so I think.They were a work of art. Nothing compares to those early pioneer machines - even if the physical resolution was a shadow of what is available now, just beautifully made Televisions. Considering the 50" was a cool 15K on release, they'd want to be.

Always had a soft spot for Pioneer gear though.
B

I'm on DTV forum, occasionally, Pios was always voted the best TVs, pity they aren't being imported any more. I was always an LCD owner but gave the set to my son and I went to a 50" Panasonic plasma to see what all the fuss was about, and it's great in the evenings but shytehouse during the day. So just bought a 42" Dick's Full HD LED (dynamic not edge lit) LCD for under $400 delivered and it runs rings round the plasma daytime, but nothing beats the plasma for movies and HD documentaries.

Like you say, amazing about the price drop. All up I have two full HD tvs that - if they had even been available five years ago - would maybe have set me back 20 grand. And two Blu-ray players which were a couple of grand each when they first came out:

I enjoyed this pic from the manual, but managed to get it onto the stand single handed. :beerbang: 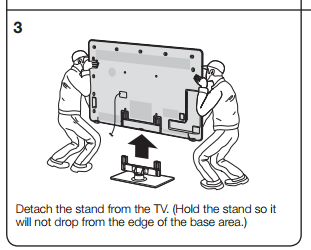 So nobody wants to make a solar death ray/giant sun cannon as discussed in the doubled up thread? http://www.aussiehomebrewer.com/forum/inde...st&p=971441

Come on! Someone take it and melt some stuff with it!
B

Careful, your post is being monitored by the CIA. Fortunately you didn't say "melt some Infidels with it"

When the 42" LCD arrived I went out to the courier truck with my hand trolley. Guy laughed and virtually tossed the thing to me. They now weigh about the same as - well actually same as - a big LCD computer monitor which is what they are, at the end of the day. I could have just carried it under my arm if my arm were long enough.

Bribie G said:
Careful, your post is being monitored by the CIA. Fortunately you didn't say "melt some Infidels with it"
Click to expand...