Here are the details of my recent kegerator build. I ended up modifying a 90L bar freezer to fit 2 corny kegs.

Having a single keg kegerator was not an option for me. What if one keg ran out half way through a session? It would be disaster. It also had to fit under my kitchen bench which really limited the freezers I could use. 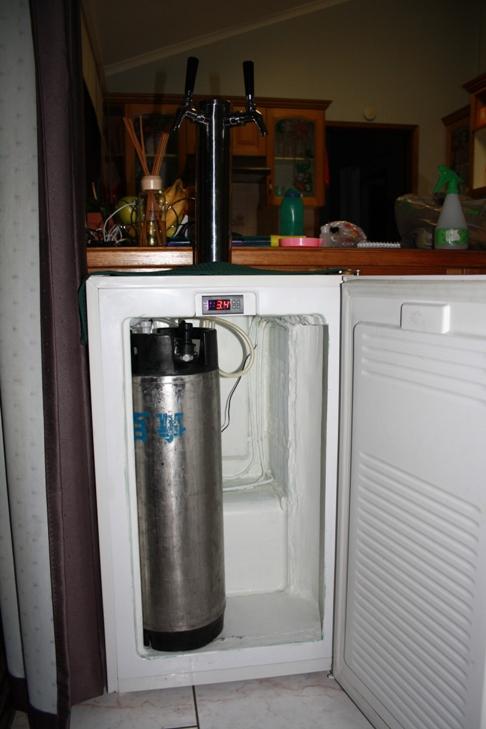 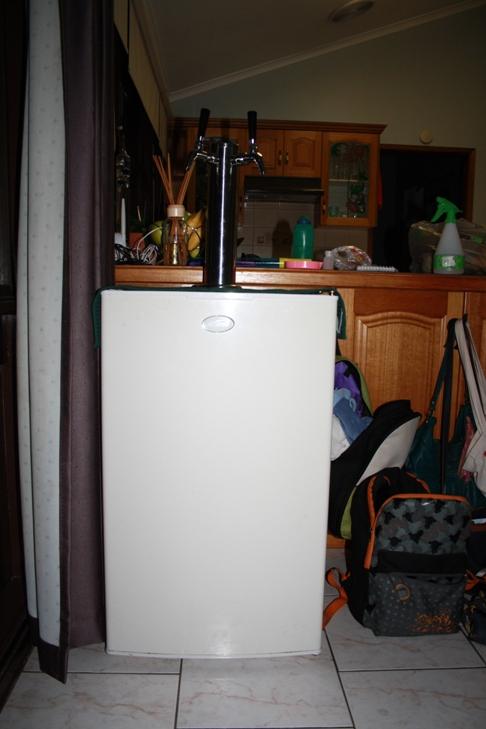 Okay so firstly the available height under the bench in my kitchen is 860mm. After much consultation with the missus, this is the only spot it could go. Most bar freezers and chest freezers are 900mm minimum, so it took me a while to find something low enough, that is also tall enough for kegs.

I looked at a few second hand freezers and I ended up buying the mistral 90L after getting sick of looking.

The freezer had internal width of only 345mm (need 430mm for 2 x ball lock kegs side by side) but the walls were 75mm thick, so I figured that I could easy cut approx 40mm out of each side.

At the time of purchase little did I realize the refrigerant tubes also run down the sides. 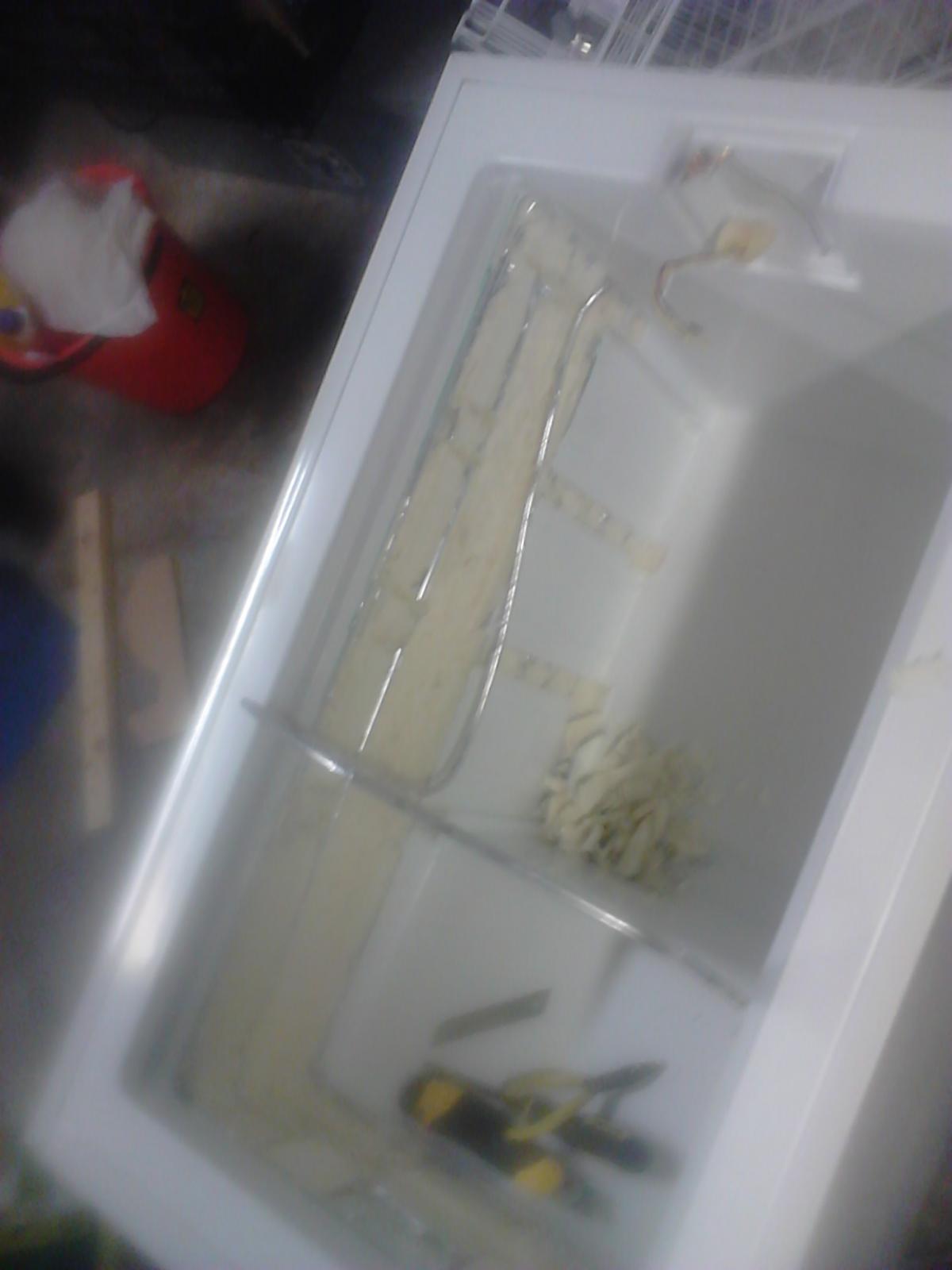 In addition I soon realized that the hot condenser tubing also ran down the sides just under the surface of the external skin. So it seemed as though the modifications I was attempting were a bad idea.

Even if I could get the cold pipes out of the way, I wondered if the cooling would fight the hot pipes I was now almost exposing?

I figured that I had ruined the freezer anyway so why not keep going with the mods.

Initially I borrowed some tube benders thinking I would need them to bend the cold evaporator pipes. I soon worked out that they are soft (probably aluminium) and bend really easy without any buckling. 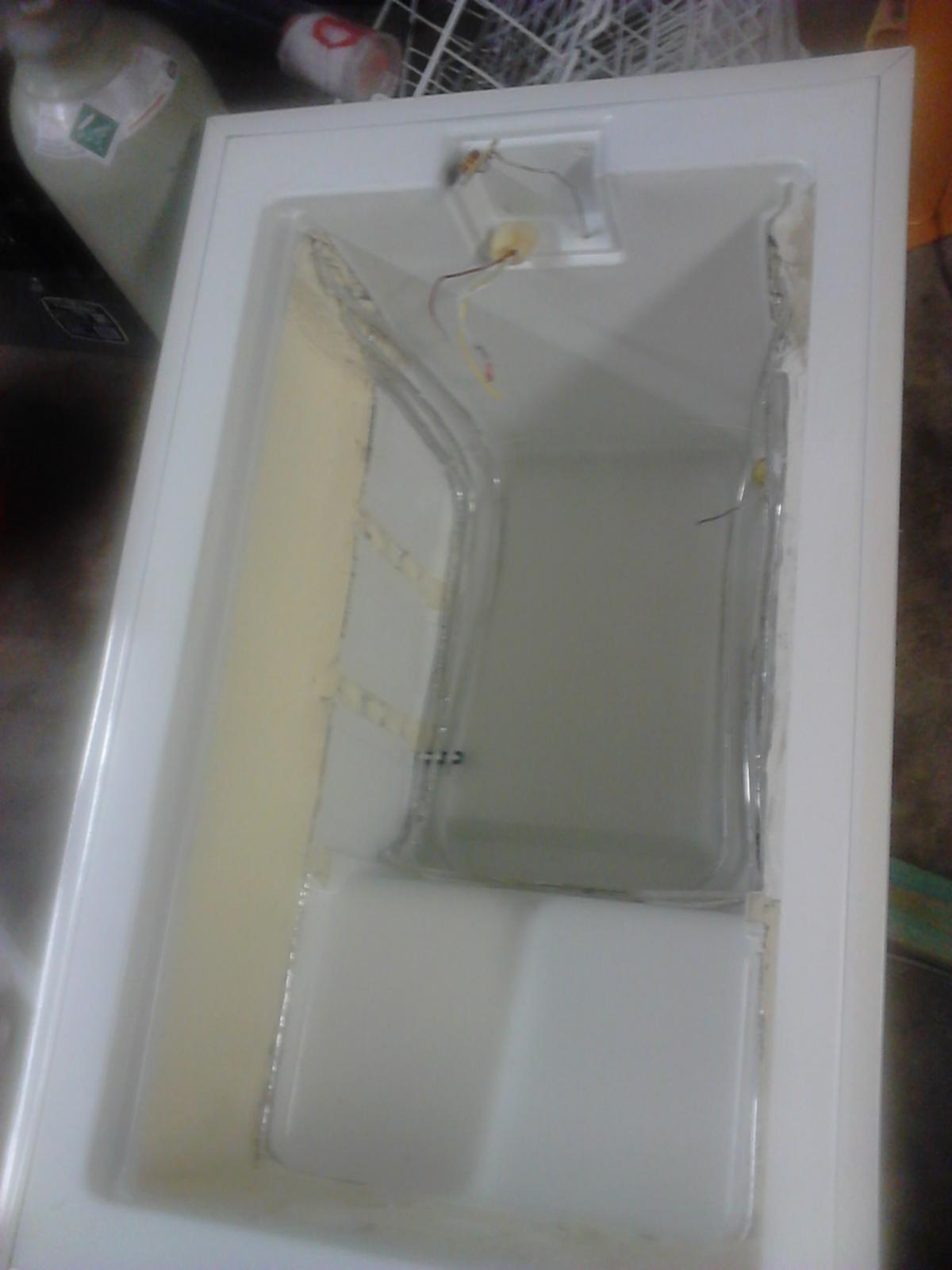 So after bending the tubes out of the way and scooping out enough foam to fit 2 x kegs I ran the freezer to see how much heat was transferred by the hot pipes to the inside. To my surprise it was still pretty well insulated. I used an infra red thermometer and it was no hotter at the thinnest point while running flat stick.

At this point I realized that the condensation would water log the foam and that I would need to do a good job waterproofing.

I ended up getting some bathroom waterproof compound off a builder mate of mine. 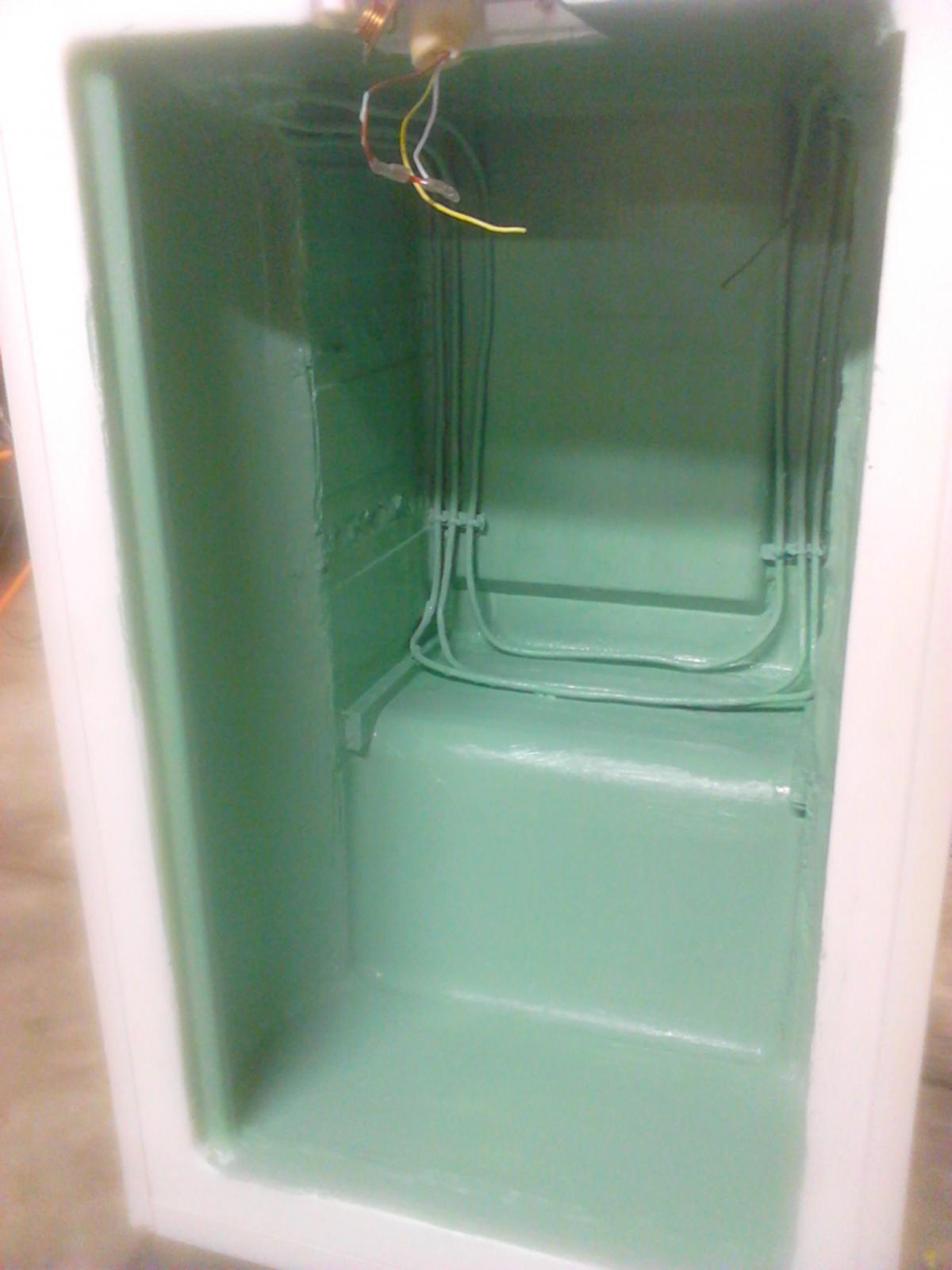 In an attempt to scab and save the pennies, I decided not to purchase a new thermostat straight up and try to modify the built in freezer thermostat to run hotter (as a fridge not freezer). I tried disassembling it and breaking the plastic limit stop so that I could turn the knob anticlockwise (colder direction) past its limit.

This did not work. So I then disassembled it further to understand it better and soon worked out why the first attempt did not work.

The thermostat consisted of a gas filled tube with a metal bladder at the end. When the gas got hotter the bladder would expand against a spring and activate a set of contacts. The knob worked a cam which put more pressure on the spring. Turning the knob 360 deg just got it back to its original spot.

I ended up modifying it so that it would have worked how I wanted it, but ended up popping the metal bladder while putting it back together.

After swearing at it I got on Ebay and spent $13 on an STC1000. Glad I did because it is better with digital control. 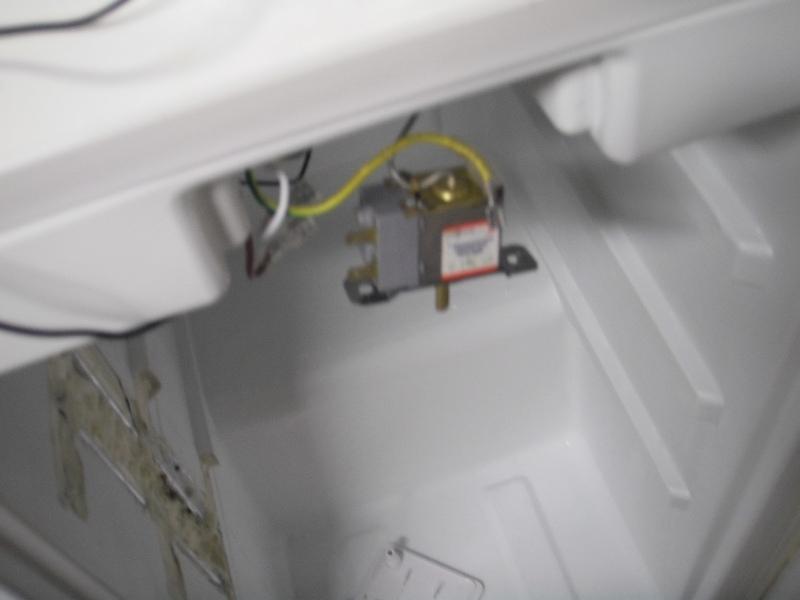 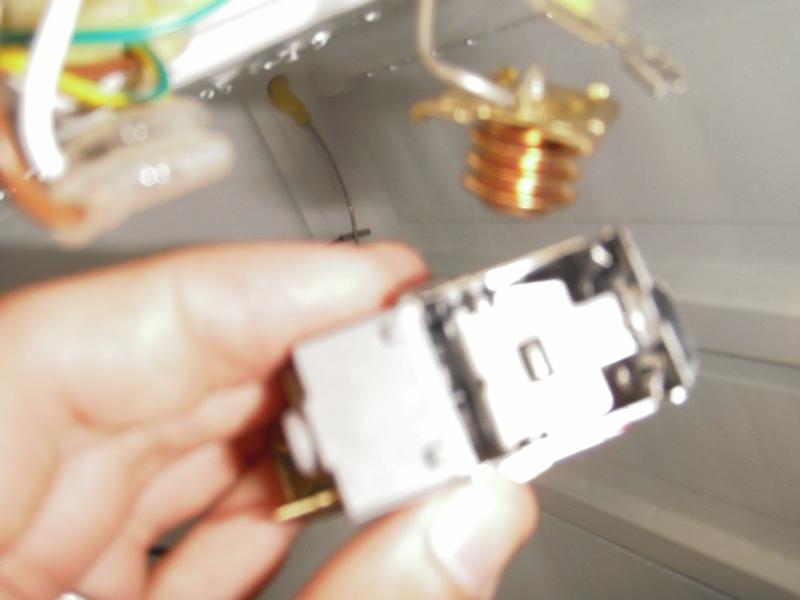 So it has been commissioned and is running fine. It seems to run on its duty cycle less than my food freezer so I am hoping that the insulation I removed is not doing harm. I am going to verify this with a plug in energy meter that I bought off ebay. This will give me a good idea of how much it costs me to run.

Nice, I have the same freezer as a secondary fermenting fridge. Find it too hard to lift fermenters in and out...
Could turn it into a Shederator now to have a beer in the shed while brewing....

Thanks for all the pics.

I'm curious freek, did the coating on the pipes stop any condensation forming?
is there any water forming at the bottom of the pipes?

Just posted this in a seperate post but might be useful for you to chill that font down a bit?

Doug,
To give you a long winded answer:
Condensation forms on cold pipes because cold air cannot hold as much moisture as warm air. When warm, humid air comes in contact with a cold conductive surface it cools and the humidity moisture falls out as condensation.

If for arguments sake you put the keg in the fridge on a day with low absolute humidity and never opened the door again, then there would never be any wet air entering the fridge and no condensation.

If the waterproofing compound and paint has any effect I would think it would negligible. It is still a cold surface after all and our goal is to cool all the air in the fridge to our fridge temperature (hence the moisture will have to fall out somehow, typically on the coldest surface).

But forget all the physics B.S. A picture says a thousand words. I have taken a photo tonight after it has been running for a week. It has some frost build up already. In this time it has been opened many times for me and others to admire. Typically the door would be shut more often and less condensation.

Apologies if this answer was deeper than what you were asking. 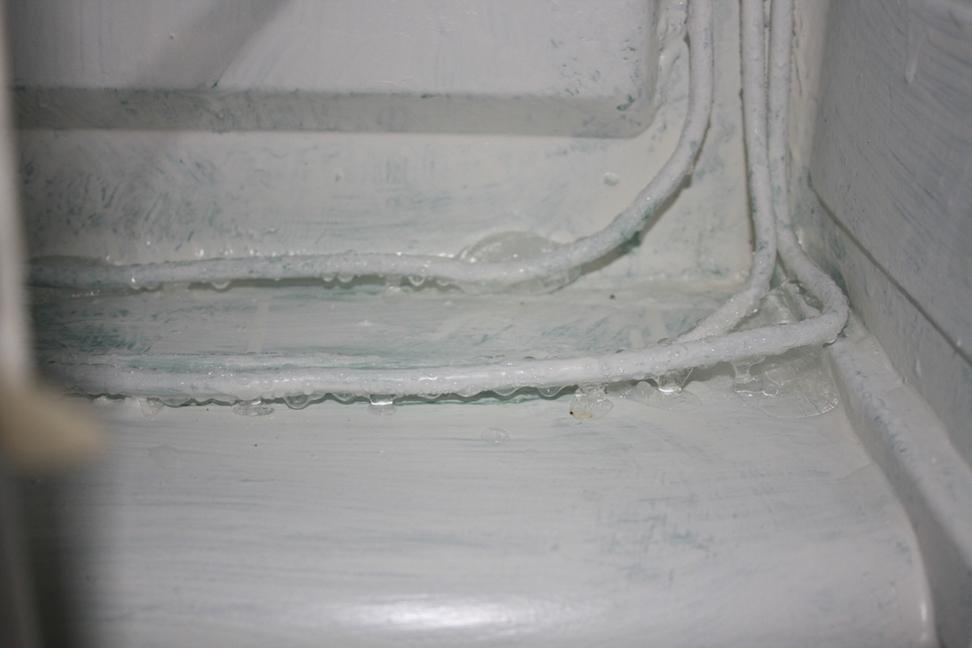 Josh,
Thanks for the link. I had considered this idea but was actually favoring another plan to run 5mm hose in a loop through the font and circulate with glycol (or even cold water) pumped out of the fridge with a small submersible pump.

The font has some level of insulation (see photograph), although I would probably not run the cooler full time to conserve energy. I would put a switch on the outside of the fridge so I can turn it on while using it. 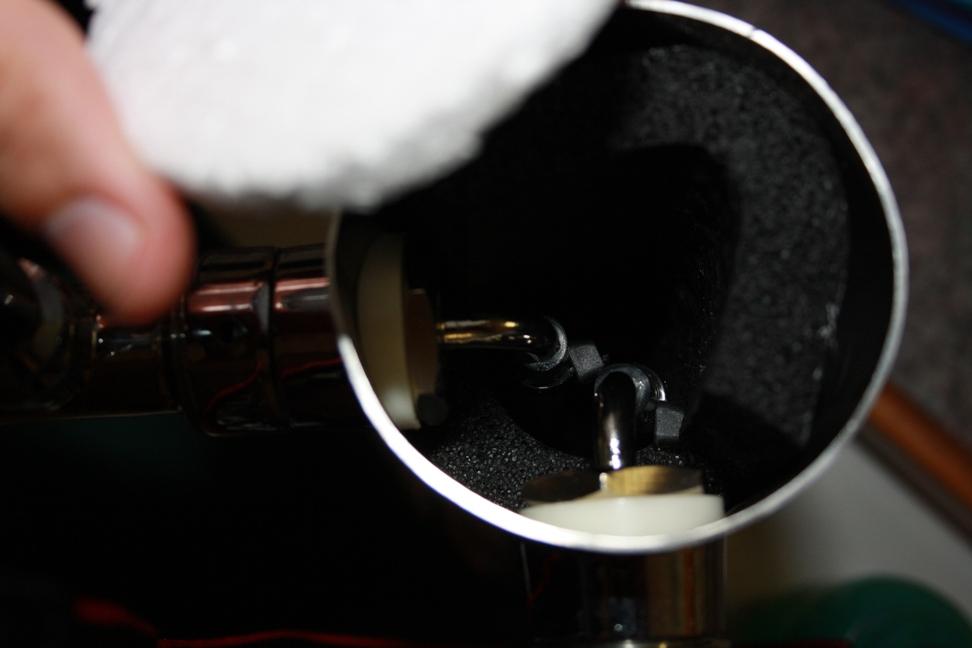 Amber,
Thats fine. The reason why I listed the prices is because like me I know a lot of brewers are conscious about costs and might find it interesting for comparison. The advantage mine has over that one is that mine has Perlick taps as opposed to Chinese, has a 6kg bottle instead of 2.6, and my costings include 2 x kegs and 2 x sets of couplers.

The big downside for my unit is that it took nearly 20 hours of my time to build and was a risky proposition not guaranteed to work.

Hey freek no probs, I think we may actually hav the same font + tap setup. The insulation on mine really wasn't very good a keeping the lines cold once I had run beer through them, and the black foam wasn't the greatest. I'd recomend a trip to bunnings and buying a long tube-shaped piece of blackinsulation foam ($4 from memory) and replacing the stock stuff. This helped mine a fair bit but still had foamy beers. See how you go after a few days though. the DIY font chiller thing works a treat for me and stops my foaming issues but its not a must-have, i just don like waiting or wasting my beers. Good luck with it though mate, setup looks sweet so far!
You must log in or register to reply here.
Share:
Facebook Twitter Reddit Pinterest Tumblr WhatsApp Email Link