I was wondering what everyones brew room looks like, thought everyone could share some photos of the setup they have, and perhaps a word or two about their technique.

I have just started getting more into brewing and got myself a keg system and working on getting a bar with 3-way tap system. So my setup is very basic as I have not ventured outside of the kits yet. I'm just starting to get in the swing of things so I will never ever run out of home brew, starting to think I might have to buy another 2 fermenters so I can get around 2 kegs per fortnight.

So here is my brew room, nothing fancy - just a store room in my garage that keeps a constant temperature in both winter and summer and is nice and dark. 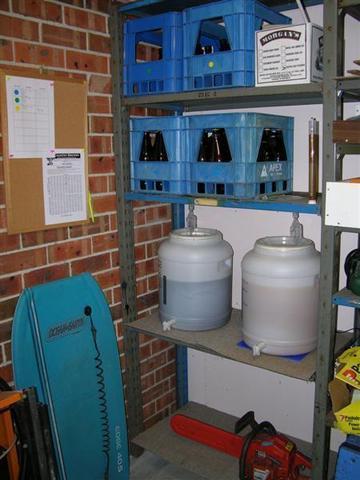 what brews are in the two fermenters?

interesting colour difference between the two.

Muga,
Interesting to see the body board and the chainsaw in the brew room. Tell me, are you a happy drunk, or an angry drunk?

Here is a picture of my brewroom:

The brewroom has spilled out into the laundry, including the brew fridge, which is lagering a lager:

And the beer cupboard, which is down to critical stock levels :excl:

My brewroom is a place of peace and harmony. :super:

Hi BeerIsGood,
Thats an interesting place to have a PC. Are you using it for temp control? If so can you explain a bit more.
And you are right!!
Those beer stocks are critically low.
Reminds me of something Barney in The Simpsons said. I cant exactly remember what it was but went something like this.
"We are running out of beer. After this case and the one after it, there are only 2 cases left"

I do enjoy talking about my setup, Johnno, so thanks for asking. Yes, the PC is part of my temp control system.

Inside the fridge, taped to the fermenter, is a thermistor , a cheap device whose resistance is proportional to temperature. This is wired back to a LabJack, that I'm borrowing from work. The Labjack provides analogue to digitial conversion on a number of channels, and a number of digital I/O's. I'm not recommending this product to anyone, I'm using it at home because I'm not using it at work. The LabJack plugs into the PC via USB.

The software on the PC monitors my fridge temperature and compares it to the fridge target temperature, which is user setable. I also have a cool function that let's you set a rate of temperature change and a final temperature. Eg: Current temp is 10C. You can set it to drop 0.5C/hr until it gets to 2C. I wrote the software in LabVIEW, which I have access to at work. The cool thing about my software is that it's a true PI controller (Proportional - Integral). Proportional simply means that if the temperature is greater than target by a certain amount the fridge kicks in (or if cooler, the heater). The integral component monitors how much "too hot" or "too cold" the fridge is each second, and keeps a running tally. It then adjusts the fridge (and heater) kick in and kick out temperatures on each cycle to ensure that the average temperature is truly the target temperature.

When the software wants to turn the fridge or heater on, it sends a +5V I/O signal to the Labjack, which I have wired to the other box on my fridge. In the box, I have three transistor circuits which read the I/O's and output a higher power +12V DC signal when they receive the +5V I/O. Each of these +12V DC transistor circuit outputs is wired to a separate 12V DC/240V AC relay. The relays control the fridge, the heater, and one is spare.

The heater is simply a 'bunker' light fitting from Bunnings (about $15), fitted with a 60W? globe, mounted on an empty ice-cream container. Heater power and thermistor cables go through he back of the fridge through compression glands.

This system is an intermediate until I've built my dedicated programmable microprocessor-controlled circuit. I can then take my brews out of the hands of Microsoft. It's also allowing me to tune my PI algorithm.

I don't really just have one room. My stuff is kinda scatered around the house. I brew in the garage, ferment and keg in the back room and store bottles and what not in a spare bathroom.

Bidtfaun said:
what brews are in the two fermenters?

interesting colour difference between the two.

Muga,
Interesting to see the body board and the chainsaw in the brew room. Tell me, are you a happy drunk, or an angry drunk?
Click to expand...

The other half of my brew room is starting to spill over to my side unfortunatly, but the chainsaw is on my side for a reason - if anyone comes around messing with my fermenters I won't hesitate to use it

The pictures are slightly out of date - the HLT has doubled in size and the space under the long bottom shelf is pretty much full of tubs of grain.
M

Very interesting BeerIsGood, that is a clever set up.

Murray said:
Very interesting BeerIsGood, that is a clever set up.

Yeah interesting alright.
A bit over my head but you have explained it well and have links to the equipment you use.
some of the brewers on here use Pc's in various ways and there have ben some interesting discusions about temp control. One day I would like to do the same.

Here is where I brew. The two kegs under the desk are fermenters. The fridge fits 6 kegs. I need more taps.

Here is my set-up, RIMS (recirculated immersion mashing system).
Pump, and temp controler/relay in pic.
And the new addition, a s.s fridge (ebay) with taps inc . ( Stainless inside and out !)

Sorry bout that, i hate computers.

Sorry bout that, i hate computers.

The pictures are slightly out of date - the HLT has doubled in size and the space under the long bottom shelf is pretty much full of tubs of grain.

Sean: a dedicated shed, now that's what I'm talking about! :beerbang: I think the adjective "hardcore" would not be out of order?

Murray/Johnno: Thanks for your comments. I actually thought I'd get people saying "why the hell do you do it like that?". Maybe that's still coming. The bottom line is, I used what I had available / access to, invested very little money, and most importantly applied those silly skills from my work to a worthy cause :chug:

What I like about AHB is the pool of proffessional skills that we have: these skills back up the advice that is shared around. This gives us all access to engineers, programmers, microbrewers, tradesmen, and whatever else we have. (Hmmm, this gives me an idea for an interesting poll). Sorry about my ramble, but I'm a two-pot philosophiser.

Guys I am storing my beers that I wont to age for a few months in a cement shed which seems to keep a consistant temperature, not to sure what but not hot not cold so maybe about 18-20c.

Would just a normal pedestal rotating fan constantly on in the shed affect the temp keep it cooler if it was a hot day?

drew - they'll be right in the shed....dont worry about a fan thats going to cost you electricity plus it'll only be blowing the hot air around anyway on a hot day.

No it would just circulate the existing air temp. 18-20 is fine for ales anyway, save yourself the electricty forget about the fan.

Steve said:
drew - they'll be right in the shed....dont worry about a fan thats going to cost you electricity plus it'll only be blowing the hot air around anyway on a hot day.

Haha to quick for me steve

R
How carbonation points translate to temperature going from ferment to cold crash?