HBHB said:
A this rate, so will be your great great grand kids Pete. I'm all over it like a rash. Don't hold your breath in the next month or so.

Mardoo, want the stainless version posted up too? Not comfy in winter.

I'll bite, and say no thanks. That's just too chilly.

Back to the topic, how do I find the starter kits containing the ss fermenters with handles? Are they out of stock?

Or am I better off with the 30 litre s/s olive storage wotsy and a s/s tap, as I brew wheat beer and need the head space?
M

Re the handles, a good tig welder could add some handles pretty easily. Like the look of these.

The MJ Starter Kit which includes the fermenter fitted with handles is available on the website Les.

Also looking at your 30-litre ss vat which has handles that would negate the extra expense of getting that carrier strap thingo for the MJ's 25 litre thus bringing it into my possible purchase calculations?
Have you got the external dimensions of this fella? ---- https://nationalhomebrew.com.au/multi-purpose-parts-and-accessories/glass-jars-demijohns-carboys-and-parts/wide-mouth-vat-30l-stainless-steel
Also, any pros or cons of using this product as a beer fermenter greatly appreciated.
Click to expand...

G'day Martin, You may need to check the page that you were planning to update with the Olive Oil fusti dimensions?
You may also want to add the b in front of the e, to make sense of your text on the page.

Thanks for your time

I'm looking at one of these MJ stainless fermenters and hoping to hear from some of those who have used them:
After having various issues with the stock tap on my Crown urn before I replaced it including a very close call of the split hose/waist height/boiling wort variety I much prefer to use proper barbed hose fittings.

Rehashing this old thread as I've finally now got my hands on a mates MJ SS fermenter, and want to know if it's hard to remove the tap for cleaning? It seems after reading through 9 pages that the tab can removed, but no one has mentioned if its hard to do.

Not if you turn it anticlockwise
Mark
M

MHB said:
Not if you turn it anticlockwise
Mark
Click to expand...

Thanks Mark, Do you have one of these?

Have had several, down sized the brewery and am back to brewing in glass.
The tap should have a couple of flats on the shank just in front of where the tap and body meet.
It was from memory too narrow for a normal spanner and you need one of those ones stamped out of 3mm sheet metal - sort of spanner you would get from Ikea if they didn't use an Allen key, I think the one of my die-grinder fitted... hum might have been the small angle grinder... been a few years but I'm sure you get the idea.
Nice little tap, well sterile sample valve actually.
Mark

@MHB, at a homebrew-scale is there much impact of increased headspace in a fermenter beyond the standard 30-ish percent? As in 12L wort in a 35L FV, or 25L in a 50-60L FV, etc.? Question is in relation to unpressurised fermentation so the headspace would fully vented from a blowoff at the top of the FV.

Shouldn't matter much, reading German brewing text books, they recommend 50% headspace for a Hefeweizen ferment just to accommodate the foaming.
Go for it.
Mark

Mark, as you would know, open fermenters have very high headspace, as at Samuel Smith: 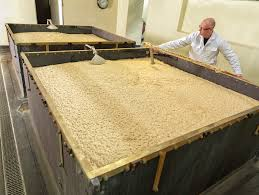 When the vigorous phase is done, the beer goes into casks or secondary fermenters with little headspace. Similarly, it's only a concern for home brewers if they leave the beer in primary until bottling or kegging.

Even then, 30, 40, 50 or even 60 percent headspace should be little worry so long as the fermenter is airtight (If it's leaky, a small headspace won't help much). To illustrate, fermentation of beer to 5.75% abv (4.6% alcohol by weight) produces one mole, or 44g of carbon dioxide, 22.4L at standard temperature and pressure. In a half-full 30L fermenter that would amount to 336L, of which maybe 10-15L would be retained in the beer, depending on temperature. Ten times the volume of the headspace. That's why the trap bubbles so much. There is a complication, in that the heavier carbon dioxide both displaces and dilutes the air in the headspace, but not to where substantial oxygen would remain in this example. I usually ferment 19-20L in a 30L fermenter.

Where the 20% rule came from, I have no idea, but when I see a post that a high-alcohol beer, which produces proportionately more carbon dioxide, has a tiny headspace and a krausen monster is overrunning the kitchen or mancave, it's no surprise..
You must log in or register to reply here.
Share:
Facebook Twitter Reddit Pinterest Tumblr WhatsApp Email Link