Up to 250,000 beer kegs might have gone missing between January and August this year alone, according to recent figures from the British Beer and Pub Association (BBPA) and keg collectors Keg Watch.
The BBPA said Keg Watch, an official body for collecting used kegs from around 300 members, has also reported a dramatic increase in thefts in recent months.

BBPA spokesperson Mark Hastings said: This is a severe and growing problem for the industry, with keg theft now on a large scale.

The association believes thieves want the kegs for the value of the metal, taking advantage of the current high aluminium and stainless steel prices. Stolen aluminium kegs are often smelted, while stainless steel ones typically get shredded or crushed.

Keg Watch has also warned of dastardly thieves who pretend they are collecting kegs on its behalf. The group said one such incident occurred earlier this year when a lorry with a side curtain turned up at a metal processing plant with 3.2 tonnes of kegs.

The metal dealers, after destroying the kegs, then found out the driver was a Keg Watch impostor who had given fake vehicle registration.

Such thefts cost the industry millions of pounds every year. Now, the BBPA and Keg Watch want to get tough by raising surveillance and working more closely with the police.

Hastings said the police were taking the problem more seriously.

Anyone dealing illegally in stolen kegs needs to know that surveillance is being increased, and sooner or later they are going to get caught. It is just not worth it, said Hastings.

The BBPA sad pubs had a vital role and that licensees should always ask for proof of identity when anyone comes to collect their spent kegs.

Neil Williams, also of the BBPA, said the association also wanted to increase awareness across the whole brewing industry. Kegs can certainly be stolen at any point in the supply chain, he said.

Oh my Gawd!
Next thing you know, people will start cheating on their tax returns....

I reckon Albert Steptoe's got 'em all. 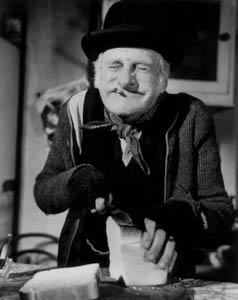 warrenlw63 said:
I reckon Albert Steptoe's got 'em all.

Well the ones I didn't get

Not using kegs for beer!

I must admit when ever I drive by a pub I dont see Beer containers I see Big ass boilers!!!! I find it rediculous that people get upset when these vessels get stolen as they are not secured and readilly available for anyone to take. If it was such a priority for breweries to maintain them why on earth are pubs allowed to just toss them out next to the trash waiting for pickup!!!!!

good point!
most people think if it's not behind 8feet of razor wire - they actually want people to take them...

A
Hello and some questions about kegging
2

Recovered yeast and bacteria from 1797 beer