had to stop being lazy and walk the 300 odd meters down to the shops today on account of MAJOR friggin loud, roads totally closed down for the weekend, 24 hour tramworks being done around the area.
passed a cleanskins shop that is fairly new and i noticed about 8 different kinds of beer from various microbrewries sold there.
i got 2 of these Holgate brewhouse Old Pale Ales to try at 3$ each. this is from the Macedon/ Woodend area im Melbs nth west.
Got talkin with the bloke that works there and i organized to go back with the only bottle of beer i had in the fridge.a 2 can coles brand draught kit i had bottled bout 2 weeks ago now. I used propogated coops yeast for that.
well got home and put in fridge for 20 mins to get it nice and cool again. opened it and poured one. Poured bloody flat didnt it. Tasted a lot like my MSB old pale ale that i am just trying now. either there was a leak in the bottle or it had been released too early. either way it was crap. no excuse for it. this really made me realise just how easy it is to make a very acceptable beer even from a kit and and a brewbooster kilo. I can just imagine how good AG brews would be.
went back with my homebrew and let him know what i thought was wrong with it. he actually told me that they had to send another batch back because of low carbonation.
crapola man , my K+K's taste just as good.
i poured him the coles brand brew and after what seemed like sniffing it for ages he tasted it. he reckons it was good but quite malty which this brew is.
anyway he seemed to like it.
im gonna give him a taste of the MSB pale ale next week and i'll probably email Holgate and tell em how average their beer is.
he gave me a Stockade Premium lager as a freebie. That is a nice lager but I've never seen it before.
oh they also had a "Chopper Read" Lager in there as well. I'll probably taste that but later on.
thats my big rant for the day 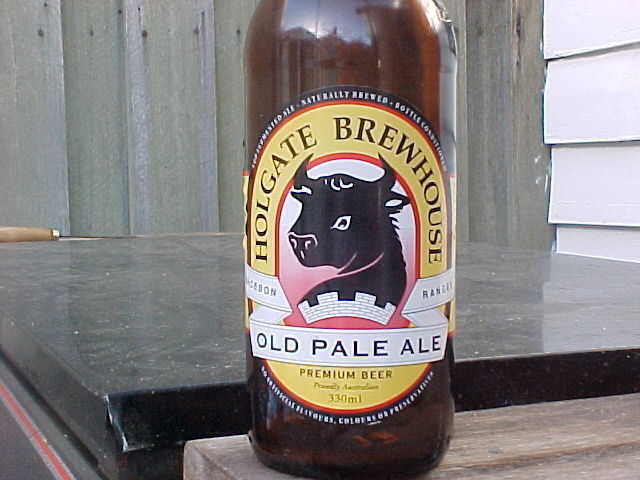 Had a drama with the Macedon 'Old Pale ALe' myself. Posted on here about it a few months ago if you're interested. Know what you mean. However I've had some of their other beers which have been excellent. Maybe a batch of 'old pale ale' had a problem...

Don't sell your K+ K brews short. You can brew some decent tasting beer in that fashion. To keep yourself interested before going AG it's worth trying some extract recipes. Boil anything from 1/3 to full wort. Great beers and much more control over the recipes without going the full mash hog. Let me know if you're interested in some tried and true recipes.

Gough,
If they had that problem a few moths back you would of expected it to be fixed by now.
Either way it totally shits me when you actually pay for beer like this.
It will take a lot for me to try anything else they put out.
Whatever happened to quality control?

1. K&K: Don't knock em. It's my main form of brewing. I reckon you can make bloody GREAT beers with a kit, some extract and a handful of finishing hops. Then it's a short step to exhanging the kit for some more extract and bittering hops and you are pretty much in control.

2. Holgate: hope you get a good response from the brewery - did you get your money back for the dud beer? In fairness to them, I drank that beer a few months ago and thought it wasn't bad. I would certainly drink it again. We should support our micros. Hopefully it was just a bad batch that they have fixed up.

1. K&K: Don't knock em. It's my main form of brewing. I reckon you can make bloody GREAT beers with a kit, some extract and a handful of finishing hops. Then it's a short step to exhanging the kit for some more extract and bittering hops and you are pretty much in control.
Click to expand...

All my placings in the nationals and state championshps were like that.

No complaints so far... :chug:

read the thread people.
i'm not knockin k+k's. thats all i've brewed so far and i'm more than happy with em.
what im saying is that you can make very nice brews with them. certainly any of the brews i've made so far have been just as good as what i purchased. just more carbonated
Actually this Pale tastes a very lot like the MSB Pale Ale ive got.

I let the brewhouse know of my misfortune with their beer. I got a very quick reply back. They basically said they had released the product too early.
They also offered me a sample pack to me. It didnt excatly say what was in the sample pack but thats very good of them.
Top marks to Holgate Brewery for excellent customer service from me.

too bad about the holgate brews not being any good (at least that batch). i know how excited i get when trying new beers. almost like going on a first date! its nice to see them admitting what was wrong with it at least. its one thing to put out a sub-standard product, but its something else to try and hide it when found out!
joe

I plan to go up there some time to try their beer, mmmmm beer on tap it should be nice... untill i drink to much and fall over.......

As promised by Holgate brewry I received a sample six pack yesterday.
2 x Old Pale Ale.
2 x White Ale which is their wheat beer.
2 x Mount Macedon Ale, which they say is a "Modern Pale Ale"

Havent tried any yet. Am looking forward to it.
Good on them for top customer service. If I'm ever in the area I will be dropping in for a few coldies and a meal.

Yep, top result johnno. Good to see they can admit a stuff up and that they were interested enough in you to follow it up with a free sixie. Should've tried it myself Interesting they put it down to getting it out too early though. You'd think that would be one part of the process they could most easily control...

You'll like their wheat beer. I'm not a wheat beer buff, but I had their 'White' at a 'beer dinner' in November tasted directly against Hoegaarden and the newest release of the James Squire Colonial Wheat. Stood up really well in that company and was probably my pick for 'hot day' beers on the night. Chill it down, wait for the next filthy 40 degree day and you'll be in Holgate heaven. Or something...

Here I go again.Old is new