does any one have an extract recipe that is close to this in taste. had one the other night and really enjoyed it.

Just tried this for the first time, just wondering if this would be bittered with POR and flavour/aroma with saaz?

not too keen to try and copy just interested to know, it has that taste that a lot of aussie beers have and I was wondering if it was to to with POR hops.

From what I hear it's done with new zealand saaz 'B'. Ask ausdb, he was telling me about it the other day.

barfridge said:
From what I hear it's done with new zealand saaz 'B'. Ask ausdb, he was telling me about it the other day.

sounds like it would be correct, very similar taste to JS pilsner (in a way) and that uses saaz B for sure...

i thought it wansnt bitter enough but then i like hops

Jazman said:
i thought it wansnt bitter enough but then i like hops

ALSO was a little surprised seeing the pale ale was super good, was expecting big things from their pilsner but ended up a little disapointed. <_<

i have to concur about the woosy hop profile of this beer. if only they did a NZ saaz explosion like Emersons Pilsener. now that is a hoppy pilsener.

neonmeate said:
i have to concur about the woosy hop profile of this beer. if only they did a NZ saaz explosion like Emersons Pilsener. now that is a hoppy pilsener.

Would love to try Emersons one day, over at ratebeer.com it is rated the highest out of all pilsners

I read somewher that Emersons Pilsener is not pasteurised at all. Does that mean that it's bottle conditioned? Maybe another yeast to add to my bank.

Stoodoo said:
I read somewher that Emersons Pilsener is not pasteurised at all. Does that mean that it's bottle conditioned? Maybe another yeast to add to my bank.

From what I have read all of their beers are bottle conditioned. It certainly is sensational beer. I'm not normally a big fan of pils but the Emerson's is an exception. Very nice bottles too.

Reviving a dead post, was looking for a recipe.

I agree totally.
I bought a few pints on tap at the brewery just after its release, it was [email protected]$*ing excellent, the hop slapped you in the face whenever you went for a mouthfull, got myself pretty tanked that day.
But then I bought a sixpack a few months later and was very disappointed.
I bought another sixpack for the xmas just gone, thinking it might be back to its original, but no, still disappointing.
I wonder if they had complaints that it was too hoppy?
Maybe its a bottle thing?

The bottles would have been pasturised - therefore the difference in taste between the bottle and the serving tank.

I once had a Tooheys Red that had not been through the pasturiser and I have to say it was pretty bloody tasty - I dont think it had been filtered either. Bruce Peachy gave it to me after a tour of the Lidcombe brewhouse. Showed me the difference between non pasturised and pasturised beer!! You lose at least 30% of your flavour.

I recently made a beer inspired by Little Creatures Pilsner. This version (all grain) is more meaty than LC's but a very popular drop. The Czech pills yeast worked well and the NZ Saaz B provide that slight metallic hop flavour, a signature of the LC Pills IMO.... Just out of interest it's also one of the cheapest AG beers I ever made. Using $1/kg Kirin Malt & NZ Hop flowers $3/100g both from WestCoast Brewers Bulk Buys.... Works out around 50c per litre!!

Potential represented as SG per pound per gallon.

Mash Name: 66 with HERMS Mash out

We called into Little Creatures brewery on Saturday while we are over here from good old Vic for 3 weeks and i gave the Pilsner a bit of a shake.
Bloody great beer!!!!!!!!!!!!! and guess who the brewer was....yep Ash....great beer Ash.

I asked for you, but unfortunately you were not on...


If anybody gets over to Freo you have to give this place a go, it was packed with about 200 - 300 people waiting to buy beer and great pizza's.

Asher
I noticed you added flake rice.Do you notice that the rice tends to give a dry finish ? Could you taste any difference from the rice.
Cheers GB
G

Therook; Kai gets his hands dirty too but the looks - I took this snap last time I was down there: 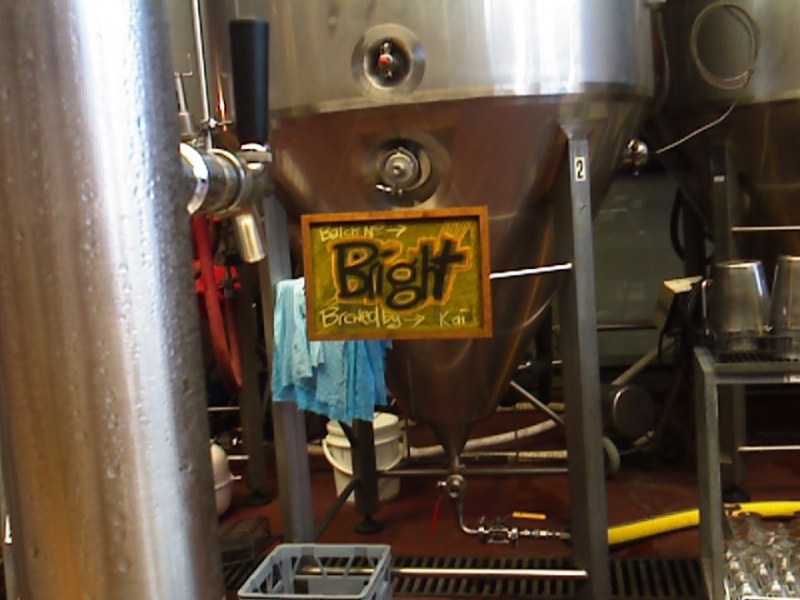