Induction brewing... anyone doing it? What induction element do you use.

I've been looking at moving to an electric kettle recently and whenever I've gone down this rabbit hole in the past induction elements have seemed like a good idea. I've read this method is pretty big in Germany and to me it sounds perfect as I just want to boil my wort in the kettle and I want something that I can just plug into a standard Aussie socket.

The other advantage I see to induction heating for the boil kettle is that the heat distribution is really even so there is no chance of scorched wort.

I've done a bit of searching for a <$500 induction elements. There are plenty out there and they seem pretty powerful but none of them state how much weight they can take. I'm boiling up to 40L of wort so I'd want one that could take ~50kg.

Is anyone in Australia doing this? What element do you use and where did you get it?

I can see there have been a number of posts on this topic over the years so there is clearly interest. Seems like the only reason there isn't people using induction for brewing is Australian availability of a suitable, affordable element.

A couple of things I've been reading on the topic:

What the yanks use:

Non available here from what I can see.

A couple of articles on the pros/cons of induction brewing:

It sounds like you're after something more than me but i can share my experience. I only boil about 6L for an extract brew and use an induction element that was only something like $50 on ebay, i find it takes a fair while to get it up to a boil. It has a whole heap of cooking settings like fry, hotpot etc and i found it would keep coming on and going off, it didnt just provide the power constantly. Whether or not thats how its supposed to work i dont know.
Looking at what youve posted they are clearly a bigger unit.

It should be very quick to heat up. If it's not it's probably the pot your using. It needs to have a high ferrous component i think
My in laws have an induction cooktop and very expensive induction compatable pots. We house sat for them and didn't like the induction as it took about half hour to boil a pot of water. Got one of my scan pan pots on abs it boiled in about 3 minutes. My advice is try another pot

I could be wrong, but I don't think those two are going to go together. 2400W will really struggle with 40 litres.

RobB said:
I could be wrong, but I don't think those two are going to go together. 2400W will really struggle with 40 litres.
Click to expand...

You could be right. I just don't know. In theory induction in a really efficient heating method. If you can get 40L to boil with and electric element then induction should be on par.

Hello, I think I’m barking up the right tree here, but feel free to correct me if I’m not... I was under the impression that induction elements are more efficient than other external heating elements as they heat the pot directly, rather than heating the pot and the air around it, not to mention having that heat spill up and around the pot.
However, I can’t see them being any more efficient than an immersion element, as this is heating the liquid directly, so there is no waste energy.
If your heating externally from below than check out induction, but if you’re currently using immersion, maybe just add another element to help with the boil?
Bob

FWIW (I’m a Yank), I use the Mai Cook Induction Cooktop. I heat ~32 liters of strike water in a boil kettle and do other tasks while it’s heating like mill grain, measure minerals, and drink coffee.

I like induction because of the precise heat control. I power it at 3500w to heat the strike water then again in the boil (~28 liters) until the hot break, then I power down to 2kw to maintain a gentle boil. I’ve never had a boil over or scorching with induction.

I also like the low operating cost vs propane. I use the brew kettle I already had which was already induction capable. ...and I brew inside out of unpredictable weather.

The only downside is now that I’m brewing inside, I had to provide ventilation for the steam and heat from the boil.

Thanks Brew Bama. How long does it take to heat ~28 litres (props for being American and talking in litres!) from mash temp to boil? In the end that's the real time that impacts on a brew day.

I don’t know exactly but have a brewday upcoming and will time it. Since the wort is already in the high 70*C range from the mash out, those last few degrees don’t take long. 20 min or so just guessing. I use that time to weigh hops (I buy in bulk), prep and sanitize the fermenter, and clean as I go.

OK. I've wanted to know if Induction would work for brewing in Australia for a long time now so I've bitten the bullet and just ordered one of these:

I've been hesitant until now as I wasn't sure:

Then this morning I found this video (and part 2) which seems to answer all these questions.


Looks like he insulates his boil kettle to help things along. I'm happy to do that. Particularly since there is no chance of the insulation burning from an open flame.

My back up plan is to get a portable heat stick to use at the same time (on a different circuit). Or if my testing fails I might just return it.

Once I've done some testing I'll report back on how long it take to get 30L from room temp to boil and from 70 degrees to a boil. 70 degrees being about the temp of my wort post mash out and transfer to the kettle. So more indicative of brew day performance which is what really matters.

There are a number of places selling these in Australia at the moment and all state that they have an AU plug. I purchased mine from restaurantequipment.com.au as they were the cheapest I could find at ~$300 delivered. Well, there were cheaper options on ebay but I wanted a store where I would have less trouble returning it if needed.

I picked up one of these Apuro units a while back, they're a great-quality bit of kit. They're the only fully manual unit I've found in Australia, in that they resume heating at the set power if power supply is interrupted. The project that I intended it for has lapsed lately but I've posted a bit of information about these units at the other place, a search should find the threads pretty easily if interested.

@Meddo oh cool. Just found them. In fact I think I stumbled on the brupi one when doing my research. Have you ever boils 30 litres with it? Do you insulate your kettle?

Nah I only did a couple of small batches on it, 10L post boil. I'd certainly look to insulate the pot though, regardless of batch size.

At some point I'll look to bypass the control circuitry with a PWM signal to integrate better with my other gear, but it's a fair way down my to-do list at the moment.

Yeah, I'm not interested in that at the moment. Who knows what I'll want to do in the future though.

This is my data from today’s brewday:

I then lower to 2kw to sustain the boil. I do have two wraps of Reflexit insulation on the kettle.

The Australian version is only 3000w so its likely to be a little slower. However, looking back at my pre boil volumes most of them are around 27 and 28L. So maybe that will offset things and my times should be similar to yours.

Did you heat it up with the lid on? Is the lid insulated too? I'm thinking of leaving the lid on until the wort boils and and then taking it off. Should speed things up a little too.

I'm researching kettle insulation at the moment. Thinking of picking up some of this on Saturday unless anyone has any better suggestions:

I did not have the lid on nor is my lid insulated. It would have gone quicker and is something I should probably consider.

OK. I've had the electrician out and got a 15 amp circuit installed. Annoyingly this couldn't be in the garage as the power in the garage goes under the concrete. So it's in the laundry and I have a 15m extension cord to get to the garage. It works.

So the total solution was:

I'll do my maiden brew tomorrow but I just did an experiment on heating times. It took 30L of water from 18 degrees to a very vigorous boil in and hour and 2 mins. More importantly it went from ~70 degrees to boil in about 23 minutes. I think this is more indicative of the brew day experience post mash out and sparge.

Unit looks solid and I don't think I'm going to have any weight issues.

Will try and remember to post again after a few brews in case anyone find this thread down the track. 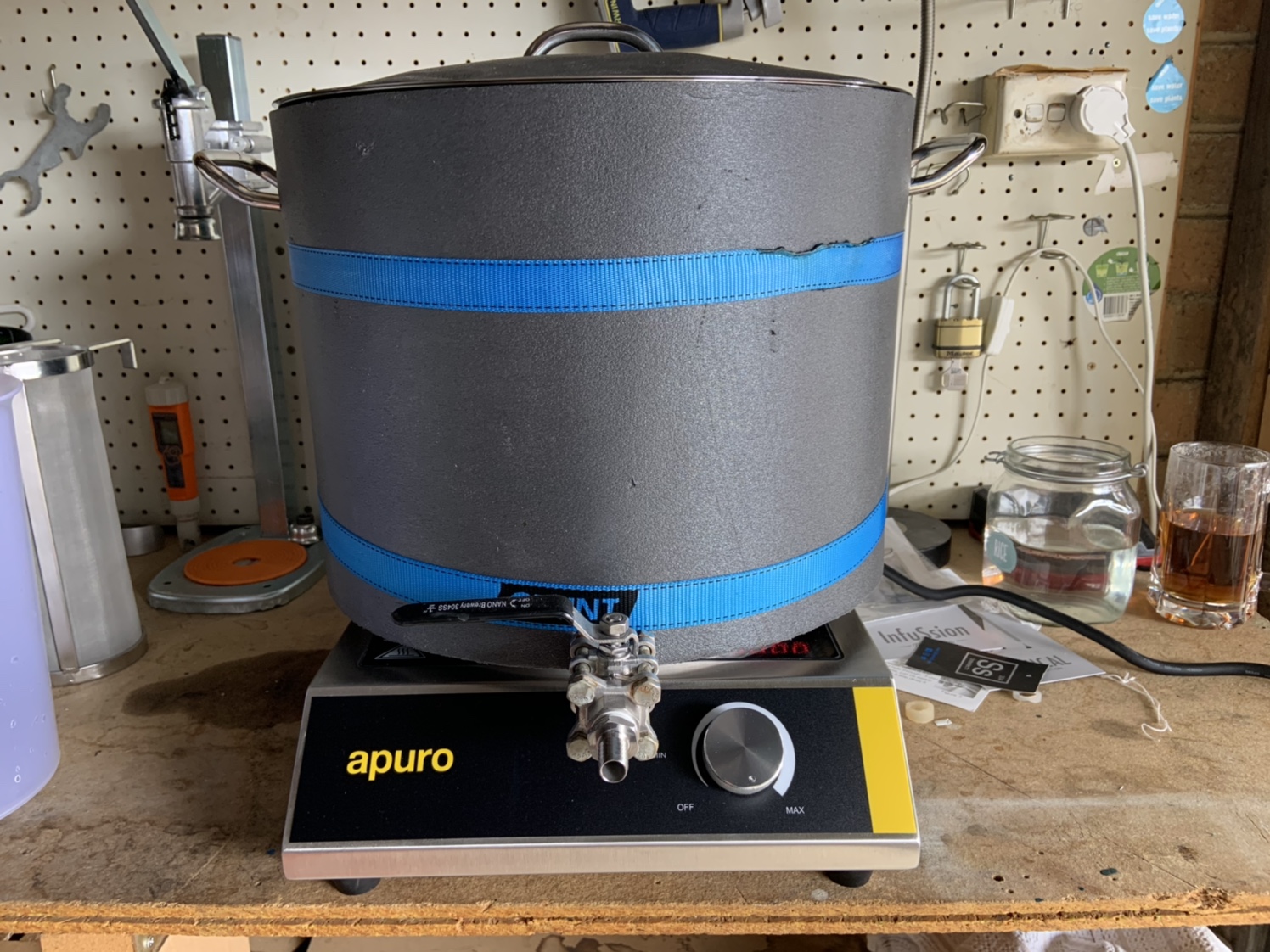