I Wish I Was In Munich

And my wife had the nerve to call me 'sick', for appreciating such a fine photo! Women eh?

...Couple more years and I'll be there

Closest I have come to an Oktoberfest is Lowenbrau, Sydney.
It's a German restaurant/beer hall - if your in the area, make sure you go there, you won't be disappointed.. great food, great beer & bar maids in traditional outfits

Beautiful.
I don't remember scenes quite like that when I was there. I think I have to go back :lol:

Is it just my suspicious mind or is the bird in the middle errr... "faking it". :unsure: :lol:

I'm in love, brings back fond memories of the European festivals.

Maybe we ought to plan a group pilgrimage one year?...

OK, here are some pics from our week in Munich including last Saturday at the Hacker Pschoor tent and the visit to Ayinga. 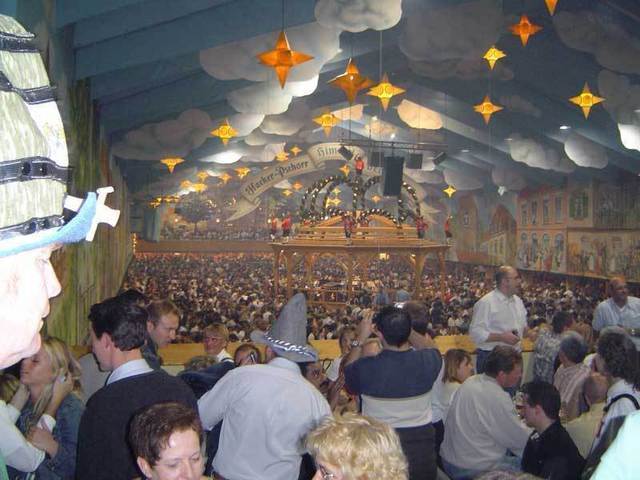 So, multiple attached images need some other knowhow?

for some reason that latest image from wes doesn't stir my, ahem... German sentiment as much as the 1st image posted....

damn it Warren, you've made me fall 1/3rd out of love!

i love the far end chick, she's just wolfing it down. The dude on the camera's probably saying "..and everyone look at the camera, hello, you the beerswilling fraulein at the back....hellooo?"
She's the one I'd be keeping an eye on down the track

tangent said:
i love the far end chick, she's just wolfing it down. The dude on the camera's probably saying "..and everyone look at the camera, hello, you the beerswilling fraulein at the back....hellooo?"
She's the one I'd be keeping an eye on down the track

tangent is a wise, wise man. I'm of the same opinion, she'd be the one.

Alright looks like you 2 have dibs, I'll take the blonde :wub:

Ohh, to only be there... at a true oktoberfest, where everyone there isn't drinking Coopers...
P

Im there next weekend!!!

I thin we should ban Poodz. This thread is about lamenting the fact we're not going to oktoberfest, not rubbing our noses in it.

I hope you enjoy your steins of beer, and roast chickens, and wurst, and the atmosphere, and the women, and the lederhosen. I'll just be here sobbing quietly.
T

You could always come to Grumpy's Brewhaus on the 29th and 30th of October for our Oktoberfest in Verdun.
Plenty of German food (Weisswurst, Kartoffelpuffer etc.) and our own Oktoberfest Festbier Lager (all malt 5.8% abv) will be available to enjoy with the music and entertainment.

See you on the Grumpy's Wiesn! Auf gehts.

Sounds like more than just the beer festival going on

The 21-year-old registered nurse, unnamed due to German privacy laws, and her two acquaintances were spotted 'filming sexual acts' by three Italian tourists in another carriage of the ride.

The Oktoberfest tourists alerted authorities, who detained the nurse and the filmmakers - a 25-year-old student and a 30-year-old teacher.

Munich police released a statement saying: "The trio were spotted in the carriage with filming equipment.

"The 21-year-old suddenly disrobed and produced a sex toy that she began to use while the other two filmed her."