First go at BIAB and some questions

Ive just gotten back into brewing beer (been mucking around with meads for a few years). I have recently stuck a G&G US IPA FWK into the fermenter with Wyeast 1056. Planning on dry hopping with 80g of citra tomorrow if the ferment has really slowed down.

I am assuming I'll loose 25%ish water volume though the boil so I was planning on starting with 5.5-6L. The spreadsheet is noting 38.9 IBU and a bottle %alc of 5.2, which is exactly what I'm after.

Pretty safe to say I've stuffed something up as I'm a newbie. I also couldn't find the grain I was wanting to use so I just selected Ale Maris Otter, as I've heard that is sometimes in pale ales and hoped it was similar for the calculation.

1) 80g for dry hopping seems like a bit much (that's about 3.5 oz), so you'll want to monitor the hop expression such that you don't over bitter your FWK. Regardless, to ensure that you retain as much of the aroma, you'll really want to wait until your fermentation has basically ended all together.

2) I put your values in my preferred calculator and I'm seeing about 68 IBU, so that may be something you'll want to dial back (I am assuming that you're using pellets and not flower). other than that, seems like you're spot on with the ABV and for a simple smash, I'd say you're right on target.

*edit* 3) I think the washing of the yeast is just fine.
N

Hey thanks for the detailed reply !

I think I’m just hoping that the fermentation is over on the FWK so then I can dry hop for 3 days and bottle on Aus Day. If not, well I just have to bottle later on after work next week. I’m thinking that only dry hopping for 3 or so days should mean that the 80g is not too crazy, however I do love hoppy beers ! 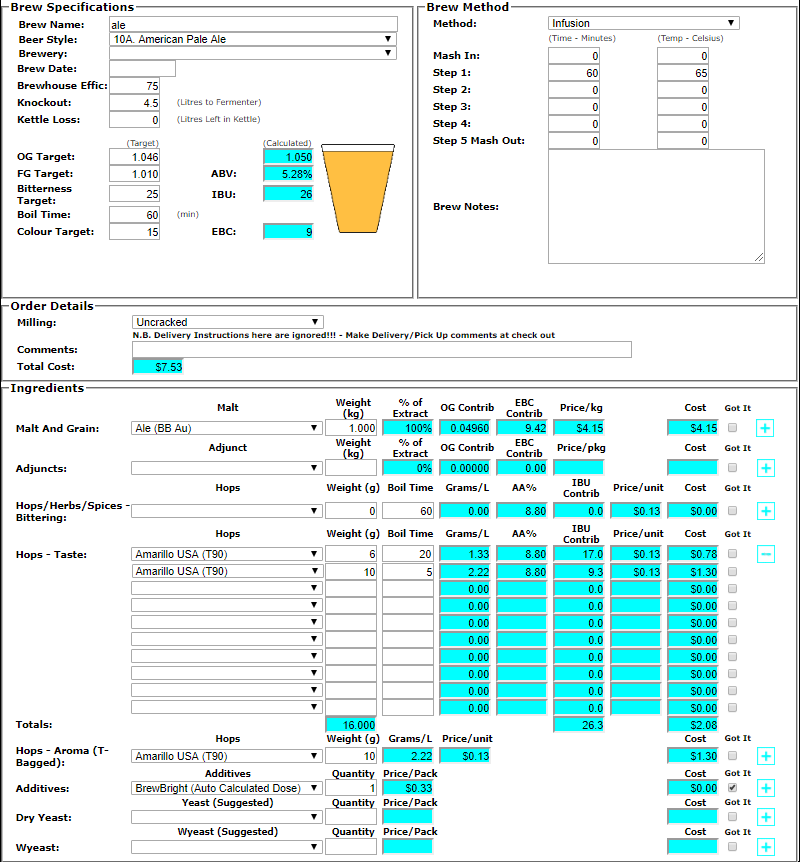 Try something like this ^ Get rid of your 60min addition which will make it too bitter if you BIAB.
I disagree with the above comment on the 80g dry hops making the FWK too bitter, it will not impart any bitterness, only hop aroma. Dry hopping will not bitter a beer, go for the 80g.
Just save the yeast from the previous batch into a sterilized bottle and you can repitch some of it into subsequent batches.

Only adding 80g is crazy in my opinion, hahahaha

Hpal said:
View attachment 114861
Try something like this ^ Get rid of your 60min addition which will make it too bitter if you BIAB.
I disagree with the above comment on the 80g dry hops making the FWK too bitter, it will not impart any bitterness, only hop aroma. Dry hopping will not bitter a beer, go for the 80g.
Just save the yeast from the previous batch into a sterilized bottle and you can repitch some of it into subsequent batches.
Click to expand...

Yeah, bitterness was a poor choice of words, but i'm not quite sure how else to express that grassy over hopped taste (that I experience when I forget to pull my dryhops for longer than a week). regardless, the point stands, the longer you leave your hops in contact with your beer, the greater chance you'll have an unpleasant flavor profile.
N

Funny more dry hops was mentioned - I was actually thinking about using citra in the SMaSH in lieu of Amarillo so then I could put the spare 10ish grams into the IPA as well!

I know I like citra, so the experiment was for both doing BIAB and also tasting Amarillo by itself.

one of the things you can do, is to make true hop tea to get an understanding of what the hop expression is. I like this guys blog post on the process and benefits to doing a hop tea. https://underthejenfluence.beer/i-tried-it/2017/1/17/i-tried-it-hop-tea
N

Making hop tea is a great idea! The US IPA FWK is only 55IBU so if it’s not bitter enough next time I might boil some hop tea and add that rather than just 3 litres of plain boiled water.
N

Just wanted to do a bit of a follow up on this one for the peeps that gave me advice.

The Dry Hopped FWK is bottled and I just had the first one last night. It’s exactly what I hoped for, nice and bitter with quite a smack of citra (might even put a bit more in the next one ). Total success !

The smash was into the fermenter on the 1st with half of the washed yeast. I kept the other half to hopefully do a starter for my next brew. It ended up only being 3L not 4L, partly due to extra boil off and the other part to huge trub from free hops.

It has been fermenting away quite strongly for 10 days now and is clearing up nicely. Hoping in the next few days to do the dry hop.

Given the loss in volume and the dry hopping I’m probably only going to get a 6 pack out of it. Oh well, it was a great little experiment and still hopefull for a tasty bev !

I see BIAB referred to more frequently, pity is I have no idea what that really is.
And FWK .....?
F

peterlonz said:
I see BIAB referred to more frequently, pity is I have no idea what that really is.
And FWK .....?
Click to expand...