NIP AND TUCK FOR ATHENS

A stitch in time should save the blushes of British women athletes in Greece.

Extra material has been added to their Olympic swimsuits because they were see-through in the water.

The costumes, complete with discreet patches, have been put through a shower test to ensure the triathlon team isn't unduly exposed.

Christine Spencer, a seamstress from Lincoln, did the alterations to 16 swimming costumes.

She told the Sun: "The fronts are made of skin-tight, white Lycra and you can see everything if you get water on them.

One Athens insider said: "It's probably a good thing that the athletes have been given a bit of extra protection.

"Although Greece wants as many people as possible to watch all the events, we don't want it turning into a mass leering event." 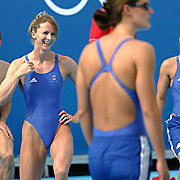 If they don't want a mass leering event why do they have women's gymnastics??

Especially once they started sweating and the bikinis get wet .

Did you guys see they have Cheerleaders at the Volley Ball inbetween games. Big breasted Gilrs bouncing about the place. Hello LAAAAADIES

I missed that part of the coverage.... lets see those aussie girls stick at it for a few more games, and I will keep an eye or two out for the "entertainment"

Seems the Norwegian Womens beach volleyballers are in trouble for wearing their birth control patches in view at the Olympics.

IOC reacts to the birth control patches Susanne Glesnes (right) and Kathrine Maaseide have been using during the Olympics. Now the sand volleyball duo has to manage without.

It was revealed Monday that Glesnes and Maaseide are sponsored by the producer of the birth control patch. The women had placed their patches very visible on their shoulders, and it has been noted.

After being informed of the issue, Gerhard Heiberg, board member in the IOC, reacted because according to the rules in the Olympics, it is illegal to advertise for products during the Olympics games.

This is a problem in both sand volleyball and in volleyball, and we have to stop it, Heiberg said to ANB. There is a strict ban on this.

Glesnes and Maaseide decided to remove the patches after having heard Heibergs reaction.

We have removed them, and we do not wish to comment the case further, Masseide said.

Jarle Aamb, acting top Norwegian athletic leader, said that he thinks the case has been over dramatized and claims that it should be okay to use the birth control patch.

We have checked this and established that the birth control patch is considered a personal item and therefore perfectly legal, Aamb said. 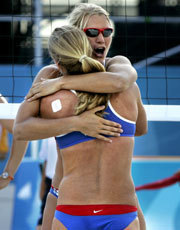 datfrog said:
Did you guys see they have Cheerleaders at the Volley Ball inbetween games. Big breasted Gilrs bouncing about the place. Hello LAAAAADIES
Click to expand...

Hey fellars,watchin the olympics pissed last night and started using my imagination looking at the shielas on that bar doing the gymnastics. Gees I seen some cunning stunts. :lol:

Did you check out the chicks doing the 10 meter diving last night ?
Especially the ones doing the hand stand starts :lol:

Yeh Doc, Ive been thinkin about it, how would some womens events go if performed nude shown on SBS after 9.30pm. You would have to make it "R" rated but Maate, the ratings would go through the rooft.

I reckon the olympics should return to their nude roots. All these full bodied uniforms atheletes are wearing these days are cheating.
J

As long as Roy & HG get to commentate the nude olympics!
T

Im with you Kai, Maate Womens gynastics, volleyball, diving in the nude, maate im drooling thinkin about it, but you would have to put the blokes on another channel for the shielas and others .

Ratings for the shotput, hammer throw and weightlifting would drop dramatically, but I reckon that's just a cross they'll have to bear.

And the women might drop out of the long jump.
T

Yeah Kai, Ive noticed they have been putting live cam in some strange places in this olympics , be interesting to see where they would put them in womens nude cycling.

Please try and keep it tasteful.