Just after some advice about cleaning up a chiller plate that has been out of service for about 5 years, I made this box about 10 years ago & we used it for the next 5 years .Then we stopped brewing & it was left in a mates shed since. Now i'm back into the brewing I want to get it back in service, what is the best way to clean it up. I dont know if it was flushed the last time it was used, but we will assume it wasnt. Any help appreciated 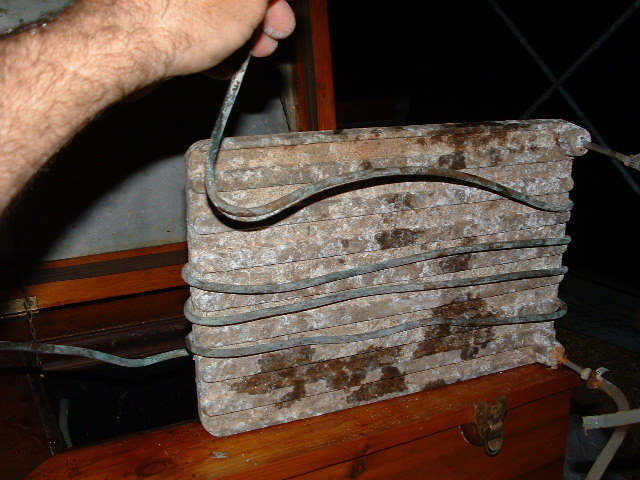 Get a good priest and a well seasoned crucifix!!!!!

Soak in in Phos. acid , it'll be like new

Thanks Batz,
But what about the beer line inside. Will beer line cleaner, left in for a few days flush any crap out,
Crusher
J

John,
What ratio water/acid do I mix
Crusher.

On sosman's site he shows an example of cleaning metal using that percarbonate stuff. I'm not sure if its the same thing but the difference in his example after the clean is pretty amazing.

Crusher
I was given a second hand old chiller plate the exact same as yours (not quite as dirty though)
Since it's so dirty and hasn't been used for so long I would use 3 things to clean it (that's just me going into overkill mode though)
Firstly take off the beer line that's on it, chuck it and get some new stuff.
Secondly give it a clean outside. I would probably try napisan/sodium percarbonate first as aluminium gets eaten pretty quick by caustic soda and acid. I used caustic soda on mine but if you do only put it in for 30sec or so because caustic soda eats aluminium real quick - it will fizz up like an asprin!
To clean the inside I used keg line cleaner which is basically strong caustic soda.
I put 5-10L in a keg, flushed about 1L through then let it sit for 30min/1hr. Flush another litre or so through and repeat until there's no caustic soda left in the keg. I pulled a fair bit of crap out of mine doing this. After using keg line cleaner/caustic soda you are supposed to flush with 20L of water. I would then follow it up with a soak of phos acid if you have it, and probably napisan/sodium percarbonate for good measure.
Once you're confident it's cleaned properly all that is required from then on is to flush with water and keg line cleaner every so often.
Hoops
S

johnno said:
On sosman's site he shows an example of cleaning metal using that percarbonate stuff. I'm not sure if its the same thing but the difference in his example after the clean is pretty amazing.
Click to expand...

Johnno, sodium percarbonate is amazing, but it is best on organic stains. From the picture there seems to be some corrosion (not sure) and the phos acid might be more effective.

I might even be tempted to get the angle grinder with wire brush onto the outside of that beasty.

Thanks for the replies fellas, will give them a go. But first this phos acid, where do you get it & does it go by another name & what ratio do you use it