Well, yesterday we had the inaugural Brisbane brewers big brew day get-together at my place and it went off a treat. From the AHB forum, we had Jgriffin, DaveR, Bunz, Hoops (all the way from Toowoomba!) and myself. We also had 4 other local brewers and would-be-brewers, including Stephen Catchpoole, an all-grainer with the big 30L boiler and imersion heater (thanks, Stephen!).

As well as downing a multitude of well crafted homebrews, we managed to fit in a 60L partial mash and have a BBQ lunch. The brew was an APA and gave us a chance to show some of the newbies the basics behind partial mashing, boiling, hopping, cooling, etc. All the ingredients for the brew ($60 worth) was very generously provided free of charge by Mal West, of Western Suburbs Homebrew. Unfortunately Mal couldn't make it, but promises to be at the next one, to help us drink the product of his ingredients! As an experiment, we split the 60L brew into 3 fermenters and added 3 different American yeasts, for comparison later.

Lots of cool stainles steel gagetry was brought along, with Hoops' little party keg taking the cake, in my opinion. Definitely on the Christmas list for this little black duck. His version of Jayse's SFPA in the keg was the stand-out beer of the day, as well - tasting great at only 1 week old!

All in all a great day and sure to be repeated regularly from now on. Looking forward to meeting other Brisbane-based AHB regulars. Now.... I want everyone to cross their fingers that my brew doesn't get infected after I snapped the stirring spoon off into the wort and plunged my sweaty hand into it to pull the spoon out, because I was too pissed to think of using tongs. :unsure:

Sounds great Snow , any piccys for the gallery?

Keep the brew days going , will join you for one sometime soon

Congrats Snow and all the Brisbane brewers,

We have a couple of great groups here in Adelaide that meet on a regular basis to brew, "sample" and discuss beer.

Groups like yours and ours are a great way to develop that wonderful homebrew community.

Well done and I hope you have many more.

Yes, it was great to talk to some of the forum members in 3D for a change!

I will post some photos when I have the film developed and I'm sure DaveR will be putting his on the forum, too.

Just want to say thanks to Snow for his hospitality, and to everyone else that attended for making it such an enjoyable and tasty day.
Big thanks to Mal at http://www.westernsuburbshomebrew.com/ for his generosity in providing all the ingredients for free.

It was good to put faces to names and try a few different beers. I look foward to the next one (don't think I'd get too many people come up here to Toowoomba)

Batz, I just bought another bag of JW malt from Mal at WSHB. Cost me $60 in Toowoomba, $55 from Mal. Haven't priced anyone else in Brisbane as WSHB is just off the highway as I'm passing through town

There is not a lot of choice in Brissy for getting some malt, and Mal is the only guy I know who not only sells the malt, but also uses it. AND he keeps his hops and yeast in the fridge where they belong.

Not a bad bloke all round. I point anyone who asks me in his direction.
M

His is the best HBS in Brisbane in my experience. Distance means I usually pick up odds and ends at Annerly, but I always get my yeast and bags of malt from Mal.
J

Seems i was lucky then! Mal is just down the road from me, and i only started buying from him because he was close

Snow said:
His version of Jayse's SFPA in the keg was the stand-out beer of the day, as well - tasting great at only 1 week old!
Click to expand...

Good one hoops. :chug:
the credit should go all to you as all i did was tell everyone how i make it.
The actuall beer that comes up is a a credit to the person who brewed it really.

Got any pics' anyone?

Thanks for the comments Snow. Good to hear positive feedback.

Jayse
I was thinking that maybe I should have fired up the CPBF and sent you a couple to critque :chug: first for approval (didn't want to give your recipe a bad name) but was unable due to time constraints. (that's my excuse anyway)

I can't complain hoops, i have promised beers all over the place to people, my excuse is hmmm no excuses just plain lazy.

Maybe we should have a APA comp where everyone does the same recipe. That would be interesting. I wouldn't run it though, same excuse iam too lazy.

Well I finally got off my a$$ and got some photos developed of the big day. Unfortunately, it seems I've lost a roll of film somewhere, so I only have one photo to post (below). DaveR, didn't you take some photos on the day? If they're in a downloadable format, I'll set up a gallery section where you can post them. 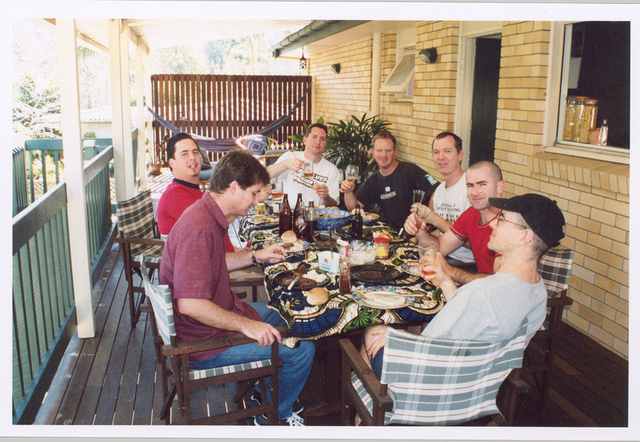 So..........when's the next Brisbane Brew Day????? :huh:
Now I'm settling down in Brisbane I have put a couple of brews down, so hopefully I can have a few beers ready for such an occassion.
At the moment my house has stuff scatterred everywhere and boxes still full from the move so I wont be able to host one till mid year at least.
Anyone willing to host one????
Would like to catch up with a few people.

sorry only just caught your post. As a matter of fact, I just e-mailed Jgriffin about maybe having a get-together on Big Brew Day, which I gather is 7th of May? A Rye IPA sounds like a good idea.

I like the idea of a get together for a big brew day, but at this stage I can not commit myself one way or the other.

I only just noticed this thread and I thought to check out Mal's home site as was reported (http://www.westernsuburbshomebrew.com) and all I got was a search engine dealing with homebrew and to say the the website is for sale.

Can any of you experianced Brisbane brewers tell me where to buy reasonble priced Grain and liquid yeast? From what I have found out is that in Adelaide and in Menlbourne you can buy a 25kg base grain for $35.00. In Brisbane I have been quoted $50.00 at the cheapest and $70.00 at the dearst price. Where do you get your grains etc.?

Apart from suitable facilities to host a Brew Day, one needs to look at the cost of hosting such evant. I would love to do so, but I am not sure my humble abode would be suitable (apart from my lack od expertise and concurrence of SWMBO).

I am a willing particpient however. (I have a half)

Mal got bought out by Brewer's Choice, apparently.
I rang up a few months ago and got Tony instead of Mal, which was a bit confused about, and he was very rude. So, WSHB has basically gone downhill. I don't have much luck with grains there, so I usually get them from ESB or GnG.
50kg of Joe White pilsener cost me $75, but Joe White is 15 minutes away from where I live, and that was through a craft brewer. I don't think I can personally repeat it, let alone for other people, unfortunately.