Anyone seen any pics of this one ?

Woman charged in major 401 crash
No serious injuries in clash between truck, car

A 19-year-old woman from Mississauga has been charged with careless driving following an accident this morning that dumped 2,184 cases of beer onto Highway 401, forcing its closure during the morning rush.
OPP Sgt. Cam Woolley said the woman, who is in hospital with minor injuries, was served with the papers this morning.

Police allege she swerved out of her lane and into the path of the Molson beer truck at 6:30 a.m., causing the rollover in the eastbound lanes. The woman's Honda Civic flipped over as a result.

Woolley credited the woman's seatbelt and the car's airbags with saving her life.

Molson spokesperson Nathalie Masse said the driver was hauling the load for delivery in Oshawa. He has a "stellar record" of more than 25 years, Masse said. The truck driver wasn't injured in the crash.

Police said the road would be cleared in time for the afternoon rush. It opened just after noon.

The remaining beer will be returned to Molson, for destruction, authorities said.

The accident happened in the eastbound express lanes of the 401 just east of Highway 400, in the area known as the basket weave.

The effects of the accident rippled out from the scene and caused major back-ups on a number of major roads and highways.

The entire load of beer was spilled, creating what one police officer described as a "sea of beer."

waaahay, that is quite a crash. Top marks for finding the pics Wortgames.

Geez, what is it with Beer Trucks in the US ?

Traffic headed into Nashville from the south found the commute a slow one Tuesday morning. Police say a beer truck overturned where I-65 flows onto the downtown loop formed by I-40.

Inbound traffic backed up several miles during the morning rush hour, while crews shut down the road while they worked to get everything cleaned up. Fortunately, the driver of the truck was not injured.
Click to expand...

I think it's just that the pictures are cool.

Did you know that a train hits a car in the states EVERY 90 MINUTES??!!

Time to add another one.
The driver blames a deer this time.
Best thing that could happen to Bud Light though :lol:

HOT SPRINGS - A semi truck hauling several hundred 20-packs of Bud Light swerved to miss a group of deer on Fall River Road last Thursday morning, and ended up on its side near the former location of the Landscape Shoppe, four miles east of Hot Springs.

The contents of the truck were considered a total loss.

South Dakota State Highway patrolman David Birkley said the truck, driven by Richard S. Tracy, 52, of Box Elder, was traveling eastbound on Fall River Road when the driver swerved to miss a group of deer at approximately 6 a.m. The truck then turned on its right side, hit a phone pedestal and power pole and came to a stop in the south ditch.

The driver was not seriously injured, but the impact forced the top of the trailer to rip open, which threw nearly all of the truck's cargo onto the road and into the ditch and nearby yard. While not all of the bottles of beer were ruptured, Patrolman Birkley said Budweiser determined the beer as a total loss and condemned the entire batch, as it was not cost effective to sort through all of the broken bottles to find which ones could be salvaged.

Olson's Trucking of Rapid City was contracted for the cleanup which took two days to complete. The truck was owned by Denny James Trucking of Box Elder, but leased to Bob Gallant Trucking of Piedmont.

The impact on the power pole also caused some additional havoc for area residents. Black Hills Power (BHP) Southern Hills Operations Supervisor Lyle Clapp said that initially 370 people along Fall River Road experienced a power outage. The collision on the power pole sent shock waves down the line, which knocked out the feeder that serviced the area. Most of them however regained service in less than an hour after his crews were able to redirect.

Twenty-three homes, that received service directly from the pole, were without power for approximately six hours, until BHP crews were able to replace the demolished pole.

Despite the phone pedestal also needing to be replaced, Golden West representative Scott Harkless stated that no one was without service during the ordeal. 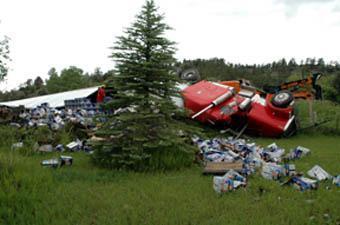 Doc said:
Time to add another one.
The driver blames a deer this time.
Best thing that could happen to Bud Light though :lol:

The contents of the truck were considered a total loss.

Best thing that could happen to Bud light? I would imagine that it could be better used to wet down the T-shirts of some young thangs for a wet T comp. Just my opinion, tho.

As far as the contents of the truck are concerned, I would have considered the beer to be a total loss before it was even brewed.

In fact, I think that they should give the trademark and name back to the Czechs!

.In 2002, Gary directed MURBAH SWAMP BEER; another short doco that captured the sprit of one small Australian town when a truckload of beer crashed into a river, just before Easter time. The film was selected as one of the 16 finalist for TROPFEST (from 611 films), and won the TROPICANA AWARD. The film also won the INSIDE FILM AUDIENCE AWARD and MOST ORIGINAL FILM at the MAFIA DOCUMENTARY AWARDS.. from web somewhere??

There is a Tropfest dvd that has it on. A pretty funny tongue in cheek doco on the aftermath of the crash. Quickflix have it, though you maybe lucky to find it in the local vid store.

I've drunk all my homebrew and I'm still worried.

Why are they planning to take the left over beer back to the brewery for destruction?
Just imagine the wonderful Christmas the homeless, shelter residents, and oldies homes could have with that instead.
And bugger the food purity laws etc etc, give people a good time, not a hard time.

it's time to step up the BPM

video here of a Carlsberg beer truck crash site, I think it looks like it's in India or somewhere, there's a whole stack of people flogging the beer off the road next to the truck, haha...

The Encyclopaedia Of Collingwood Jokes!