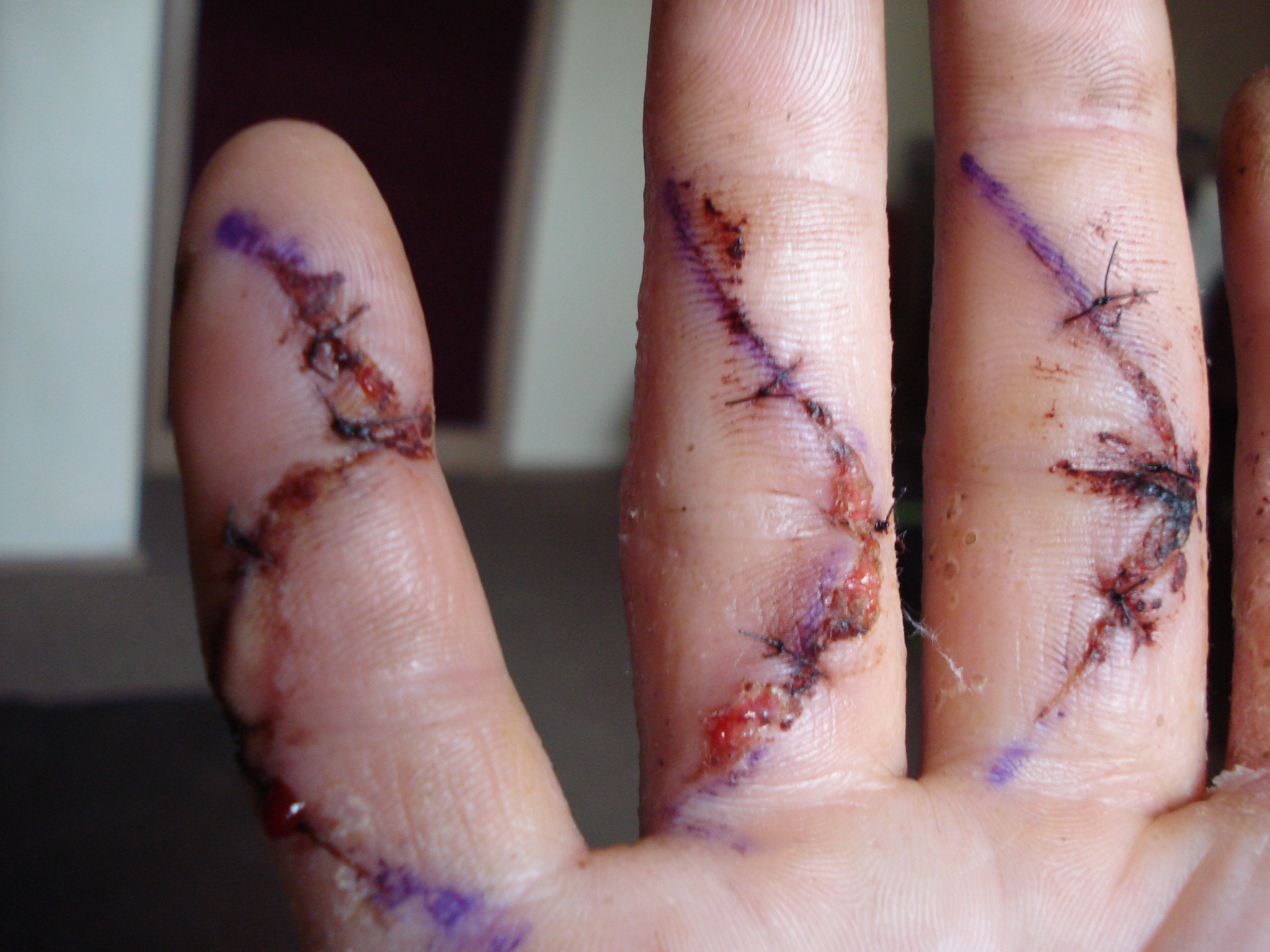 Wow that's a confronting photo when your not expecting it.

Hope you get back to A1 soon mate. Amazing a little splinter of metal can lead to this.

Fark! Are you right handed?

thedragon said:
Fark! Are you right handed?
Click to expand...

helles said:
Yes mate
Had some pretty nurses doing everything for me in Hospital
Click to expand...

Not that I'm qualified to comment.... but I seem to recall that burns, cuts and infections are best if kept cold.

Mrs Helles should ensure that you have a cold beer in your hand at all times!

helles said:
Yes mate
Had some pretty nurses doing everything for me in Hospital
Click to expand...

Lucky bastard. But seriously get well soon mate. 2 accidents to my R hand in recent months has been a real pain in the ass.

All that for splinter..hate to go in for headache at that hospital
S

I had a broken right arm and hand bone not to long ago, 6 weeks in cast and I can tell you that doing things left handed was a challenge.

I know your pain. :icon_chickcheers:

Crikey that's nasty. What went wrong? I mean obviously there was a nasty infection, but why did you need all the cuts/stitches in the other fingers etc? All the best with the recovery. Was it a brewing incident that led to the splinter?

helles said:
I got little metal splinter in my little finger last Monday
Little finger swelled up on Wednesday
Hand swelled wednesday night
Went to Emergency department Wednesday night
Normal Hospital shit Heres some Antibiotics see your local GP tomorrow
Thursday morning my wrist had swelled up
Went to local GP
He said i needed Plastic Surgery
Back to Emergency department
5 days in hospital and 2 operations i got out on Christmas eve with this
Click to expand...

Shit a brick helles, is it tetanus?

4 pm yesterday I was in the last stage of sanding the cut underneath the rim of a keg. I'd been round a few times with a flapper disc underneath, had a quick light feel around inside the keg, then attacked it with a piece of fine wet & dry paper. l felt a quick sharp prick in the tip of my right index finger from a sliver of ss that went straight through my glove. I went to pull it out but it wouldn't budge. I carefully peeled back the glove to find the thing had gone through the pad about 2mm deep & out the side 10mm later. Bugger me, these things are really brittle. I cut it with snips to get the glove off & on further inspection discovered I had about 6mm at the pointy end & 15mm at the other. To push through or pull back that is the question? A fishing hook is a push through cut off the barb moment, this was a f*&k me it resists both directions. Pulling back something was catching & pushing forward the sliver tapered bigger & probably had barbs as well. After fiddling with it for 10min about 5mm broke off, so that was it off to the bloody doctors on xmas eve. All shut, so off to the Emergency Department at the hospital, they'll have the tools & know how for the job.

A nice doc inspected the situation while had a discussion about barbs, brittleness of heated ss, pushing & pulling, being able to play the piano etc. He told me it was one of those tricky situations that might not work too well. He then tried to cut the tail off with a pair of scissors which I knew wasn't going to work, I thought they'd have super duper little snips & such, but apparently not. After admitting defeat with the scissors he proposed a third option called the pull through which we decided to go with. I bravely declined a local so he set to work with the task at hand. Ah that's better I said even though I was bleeding like a stuck pig, but I spoke too soon because on further inspection he said there were still very small pieces at both ends & through the middle still there. After 10mins without success he admitted defeat & said he could cut them out but I'd be best avoiding that option, I agreed. He then dressed my finger with a super duper treatment & condom finger bandage. It was a very suggestive erotic thing to see being applied & if it had been a sexy nurse doing it I would have cracked a fat for sure.

I'm not to worried about infection myself having recently had a tetanus shot, the ss involved had also been nicely pickled in good quality beer :lol:

carniebrew said:
Crikey that's nasty. What went wrong? I mean obviously there was a nasty infection, but why did you need all the cuts/stitches in the other fingers etc? All the best with the recovery. Was it a brewing incident that led to the splinter?
Click to expand...

Edit: 5 days without a smoke too.

Talking of small bits of stainless..... I had about 50 of them in my head... nurse took over an hr to pull them and all the stitches out... :unsure:

Are you bulletproof boy?

Man, that's a hell of an infection, wish you a speedy recovery, since you've been off the nails 5 days, take a positive out of it and give up the smokes hey!

I don't mean to have a go at you personally, but seriously, people don't pay enough attention to what can go wrong when doing D.I.Y shit.

I hope you make a speedy and full recovery and everyone who does their own mods on anything.........SAFETY FIRST!

HB so good, it will raise the dead

Hope the recovery goes well.
i wont comment about northern hospital (i assume u went thete).

Its screwy what u can get. My great uncle only just got out of the hospital after 6weeks. He was prunning rose bushes, got a small prick in the finger and ended up in hospital with a skin graft up most of his arm from where the infection had 'eaten/destroyed' the tissue/skin in his arm. he's 70 something. Almost killed him.

I jad an axe handle break mid chop and splintrr off into my hand. We wete out bush and got to a doxtor a.few days later. Off to a plastic surgeon to remove the wood because of where the splinters were located. The surgeon turned out to be a breast plastic surgeon, lol. I felt my hand was in safe hands.

shit mate, not good. hope for a speedy recovery and full use of the hands.
S

Ducatiboy stu said:
Talking of small bits of stainless..... I had about 50 of them in my head...
Click to expand...

It`s timely you mention that. The bloke that moved in across the road recently has a steel plate in his head that causes havoc with our garage roller door. Every time he`s out the front looking over here, the auto on our garage door opens and closes for some reason.
I`ve had to reprogram the pin number on the remote control I don`t know how many times
Any one else had this problem?

staggalee said:
It`s timely you mention that. The bloke that moved in across the road recently has a steel plate in his head that causes havoc with our garage roller door. Every time he`s out the front looking over here, the auto on our garage door opens and closes for some reason.
I`ve had to reprogram the pin number on the remote control I don`t know how many times
Any one else had this problem?
Click to expand...

Does he look like magneto? I'd stay away from that guy. Does he have that mean "I'm going to break in through the garage" look about him?
S