New Setup Put To The Test

Hey all,
I'm brand new to brewing, and just wanted to say hi. I've been browsing around on these forums for a while and have already picked up a world of knowledge from what is floating around here.

My first brew was ready to drink on sat night and I was quite impressed with how it turned out. It was just the standard coopers lager, but it was an absolute hit with the folks at the party.

The homebrew was in secondary for about a month, so it was time to put it to the test - I also have set up a dispensing fridge with a commercial setup, and happened to have an entire keg of Carlton Draught going through it, waiting to empty it to keg my next batch of brew.

After people had the home brew, nobody wanted to drink the swill that was coming out of the tap. I threw the party so that it would get emptied and I could fill it with my homebrew, but it took such an effort to get them off the homebrew. In the end i just tapped about 5 litres into the garden. But completely depleted my homebrew stocks (except for the 3 longnecks i'm leaving to age)

If the standard coopers lager is so good compared to commercial beer, how much better can I expect the beer to get as I get better with brewing?

The results have certainly convinced me to keep going with it, for my next batch which I will be putting down tonight I will be doing a coopers pale ale, with 1kg of dextrose and 500g of light malt. Hope all goes well!

Attached is a few pictures of my setup. 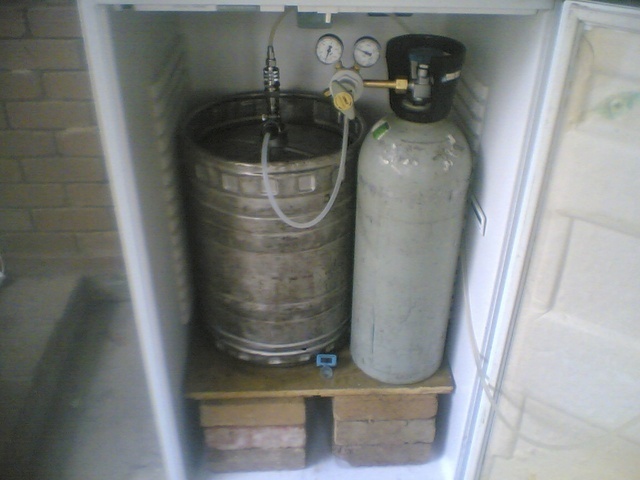 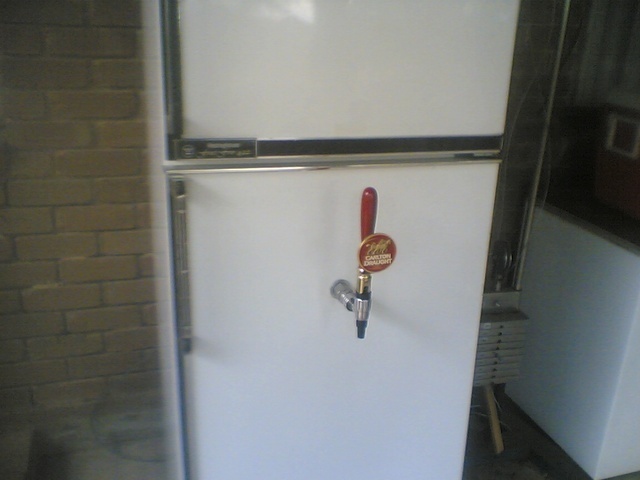 Niice work... "The force is strong in this one"

It wont be long before you start playing with specialty grains, Extra hop additions, doing full wort boils & partial mashing in search of that next flavour hit....

Here's to beer with flavour!

Asher for now
B

muuaahahahaha!! (evil laugh) we have you now, there is no escape!

I don't think it really matters if the gas is cold or not, still does the same thing.

i have been brewing for years and still dont have the keg going yet.

working on it though, only need 1 fitting, some gas line and a fridge, another bloody fridge.
A keg fridge will make 4 fridges.

the power company is going to love me.

I made ny last real ale with a 1.7 kg can of ESB (coopers) light malt and dry hopped in secondary for 1 week with 15g challenger.
brewed with WLP023 burton ale, wonderfull but messy yeast.

keep it up, there is more out there than coopers lager, wait till you start mashing.

keep it up
B

The bottle is fine in the fridge, to make dry ice out of it you need about -38C from memory. It's only in there for convenience reasons at the moment, but as soon as I get 2 new corny kegs it will be outside the fridge.

I can't wait to start experimenting with things like hops and different yeasts, etc. Who knows where this is going to take me. All I know is I have ruined myself on commercial beer for the rest of my life, so I guess I'm going to have to continue with the brewing! My girlfriend is gonna love that!! :unsure:

US to MX to AU

J
Back to the fold