The new brew fridge is almost complete, but at least it's reached the critical stage of being operational. A mate donated the fridge, and it was in shocking condition. Really tatty with a few choice expletives scrawled over the front doors. To make the appearance acceptable for inside the house, one of the boys in the workshop got some left over galv sheets and bent them around the doors. This required realigning the doors on the hinges a wee bit as the galv sheet added extra height to the top and bottom to the fridge and freezer doors.

The fridge is 520 liters and with the door shelves removed can hold six kegs. This means I can have 5 beers on tap and a sixth chilling and carbonating.

To spread the load of the kegs, I built a shelf out of plywood which extends back over the compressor hump.

I had a bit of luck with the beer lines which are 3/16" ID silicone tubing, which was donated by one of the lab guys. 100% inert, has the highest FDA rating. It also stays soft at cold temperatures, which is useful for when you have loads of lines.

Temperature is regulated by a home built external thermostat using a TS-040S from Tobins.

All the taps, QDs, manifolds etc are from Brewers Discount.

I'll create a gallery when the project is complete and have more photos. 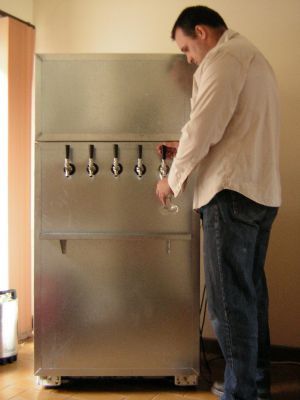 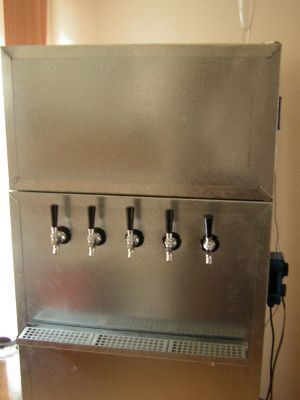 Nice and shiney.
Very very very impressed.
Great job.
Now where are the kids for the fingerprints

Beautiful job MAH...
You should patent this design and build them commercially!

*barfridge wipes the drool from his chin*

superb piece of kit!
How much to build me one?

Now you know my opinion on that fridge MAH.

I'll be round in five minutes. Have it charged and ready to go

Five beers on tap at the one time... just magic

dreamboat said:
Five beers on tap at the one time... just magic
Click to expand...

At the moment there are just 4 beers on tap. The 5th tap has been snapped up by my partner. She wants a 3gallon keg full of Vodka and Lemonade on tap!

NICE - definitely need to keep the other half happy.

Nice ratio - One for her and Four for you..
M

GMK said:
NICE - definitely need to keep the other half happy.

Nice ratio - One for her and Four for you..
Click to expand...

Actually it works out to be 5 for her as she also drinks my beer!
D

MAH said:
The 5th tap has been snapped up by my partner. She wants a 3gallon keg full of Vodka and Lemonade on tap!
Click to expand...

Premixed vodka + lemonade? Can you do that in a single keg, or will it be lemonade and add vodka after poured?
Interested for similar reason

dougy
just mix it all together in the keg and serve.
I have done a whiskey and coke on tap before and it turned out great.
It was a little flat from memory so you may need more beer line or a compensator so you can run it at a higher pressure.
Hoops
D

is this for immediate serving?
would the vodka tend to seperate from the lemonade?

just wondering for that sunny day when i get kegs

I think once it's mixed it's fine. Shouldn't separate. Just add a couple of bottles of lemonade plus a bottle of vodka, and as long as you don't lose too much gas when you pour the lemonade in it would probably be OK to serve straight away.
You must log in or register to reply here.
Share:
Facebook Twitter Reddit Pinterest Tumblr WhatsApp Email Link