Im looking at putting on a Milk Stout to supplement my Oatmeal and Choc Stout supplies for winter drinking. Im not sure wether to go extract or all grain on this one, this is a AG recipe I found, any comments welcome.

I like to use a good chunk of pale choc in my milk stouts. It gives more of a chocolatey flavour that suits the style.

I am also interested in doing a Milk Stout. But I am getting confused by the Roasted Barley and Black Malt, I know one is malted barley and one is unmalted barley.

What I want it a smooth sweet stout, I do not want acrid dry ashy flavours in there, and I was planning on using only Joe White malts. I already have some lactose, and I was only planning on 12L batch.. can anyone give me advice on these roasted additions and quantities, I see some recipes with roast barley and some with black malt but their percentages differ. I would also be interested in adding some oats or flaked barley for improved head and mouth feel.

Here's my milk stout recipe, actually its Brew Dog's 'Jet Black Heart' or my translation of the recipe. Still carbonating so can't comment yet on how it turned out, but tasted good at bottling time 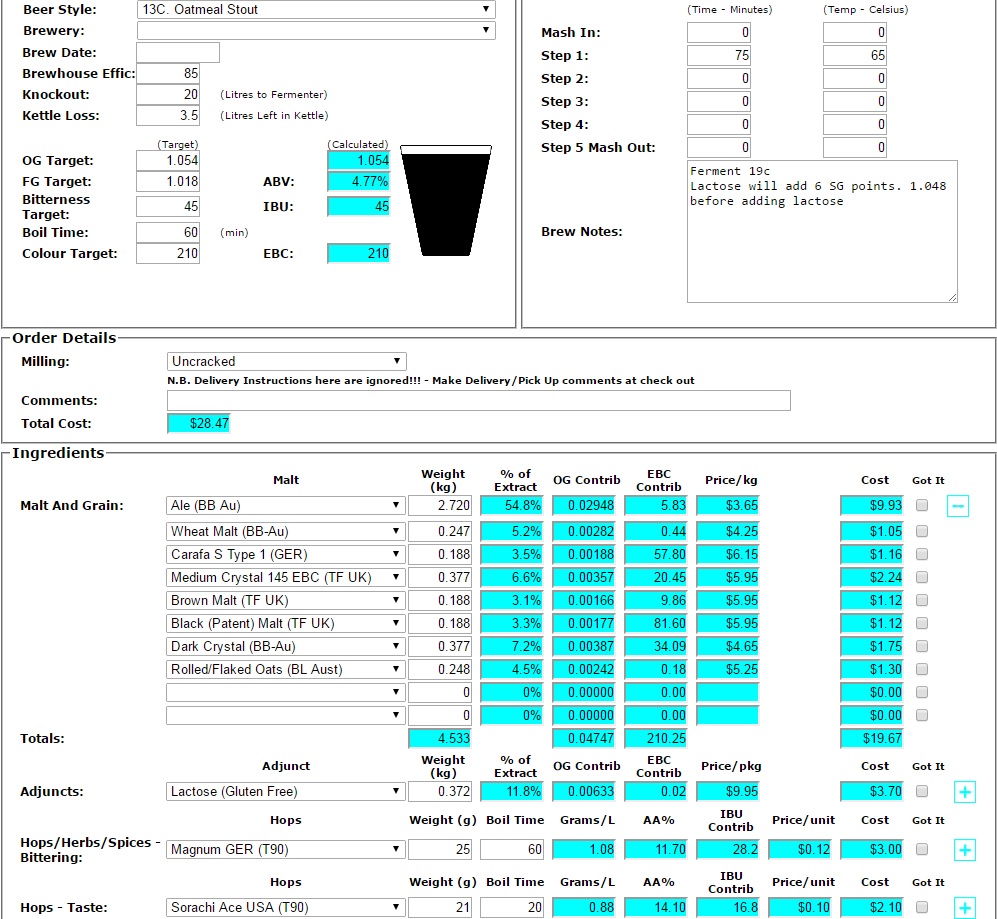 Gluten free lactose! Makes you wonder - can you get a variety with gluten included?

love a Milk Stout, but OP was four years ago so my critique of the recipe may no longer be required!

I thought he might have been still waiting! After 4 years without a comment I just couldn't resist :lol:

I sometimes do a variation on this concept and use whey from cheesemaking in the mash. From that you get lactose and some other qualities - added creaminess, maybe a touch of lactic acid, maybe a few fermentable sugars in the milk (galactose, mostly), and protein.

I did this late last year with about 7 L of whey; I had been intending to use whey as the *only* liquid for my brew and do the mash and sparge with it, but I didn't have quite enough I wanted to hopefully get some enzymatic action from the milk (which possesses several potentially useful brewing enzymes, presumably originally there to help the calf digest milk and grass well). The whole thing went quite well and as a result I got a creamy, fairly sweet porter out of it - a bit oversweet because I also added liquorish during the boil. A kind of lollypop dessert beer. I want to do this again this year.

Hey Tim you should try using protein powder like body builders use WPI or WPC.. that's made from milk.. then drink to good health..lol

I wish I could get better info on the black roast malt and roast barley.. the info I can find online is so stale, I would like to know from people who have actually used these things not just read the descriptions of the grain..

Hi mate,
While both are similar, I would describe black as more like burnt toast mixed with really high cocoa chocolate.
Roast barley is much more like coffee beans.

If you wanf it really smooth, as well as balancing the roast amounts, take a look at various late addition methods.

I cold steep crushed roast malt in a covered pot overnight and add to the last 10 minutes of the mash. Very smooth, no acridity.

Excellent! thanks Manticle, that's exactly the sort of info I was after.

Do you get the same type of smooth result from cold steeping the roast barley?
Would you cold steep the Chocolate malt or add that to the mash?

So for my 12L batch I could cold steep a mixture of Roast Barley and Black Malt, like 250g RB an 100g Black Malt? and you still get the coffee and chocolate flavours coming through?

All the roasted grains are cracked and steeped together.

Still plenty of coffee and chocolate.

excellent, I love this. I feel so much better about trying this now I'm getting the method worked out.