When posting links please give a description of what the link is for.
Also the link you gave requires you to register to get the story, so why register when we don't know if it is worth it.

If you want to check it out and can't be bothered registering try Bug Me Not. They have alot of logons for sites like that.
Hoops

hoopsunitedbrewery said:
If you want to check it out and can't be bothered registering try Bug Me Not. They have alot of logons for sites like that.
Hoops
Click to expand...

A quirk in the beer and a cap on quantity

The phenomenon seems less remarkable in the underhyped world of craft beer, since a home brewer usually starts in that cold room. But Tom Baker makes an important clarification when he welcomes a visitor to Heavyweight Brewing.

"I won't dispute it. I make garage beers," Baker says. "But at least this isn't my garage."

It's not even that glamorous. Heavyweight is a tiny operation hidden in the concrete belly of an anonymous industrial park in Ocean Township, N.J., near Asbury Park. Here Baker can be found bopping amid gleaming kettles and roasted malt to a steady soundtrack of drinking tunes such as Tom Waits' "Warm Beer and Cold Women."

The quirky, iconoclastic beers that have emerged from Heavyweight over the last five years have been earning Baker serious praise as one of the industry's most original and competent small brewers. With limited production, his bottles have become the beer equivalent of cult wines, without the tall price.

"I think he's brilliant," says Monks Cafe owner Tom Peters. "He has the soul of a Belgian brewer - he'll throw anything into his kettles."

Like the entire juniper bush he added to make a Finnish-style "sahti" beer for Heavyweight's anniversary. Or the wild rosemary, sweet gale and yarrow that infuses his herbaceous Two Druids, made to a 15th-century recipe for medieval gruit ale. Or the Roman beans and chocolate malt that give a rich texture and fruity sweetness to Perkuno's Hammer, a rare rendition of Baltic porter.

Baker has also earned followers for his Lunacy, widely considered one of the best Belgian-style golden ales in America. His unusual Cinderbock lager, inspired by German rauchbier, tastes like a malty elixir of caramel, smoke and silk.

"Tom still has the home-brew ethic: He does what he wants to do," says Canadian beer writer Stephen Beaumont. "And it appeals very strongly to the beer-geek community. They all want to do what Tom's doing. They just don't want to leave their cozy jobs to do it."

Baker quit his own cozy job as a computer programmer 11 years ago to go to brewing school. His five-year-old brewery began turning a profit only this year. Though distribution has expanded, Heavyweight's production remains a minuscule 700 barrels a year. But the ripple-effect influence of a successful small brewery like Heavyweight shouldn't be underestimated.

"People like Tom are pressing the envelope," Beaumont says. "And the world of beer thrives on the Unconventionals."

As for Baker, becoming a large brewery was never his main goal.

"Someday, eventually, I'm sure Heavyweight will go away," he says, "because I don't think there's really a big market for the beers I make. But I'm glad Heavyweight has a good name. I just want to do something interesting. And I'm happiest on my brewing days." 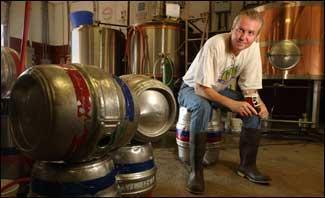 has also earned followers for his Lunacy, widely considered one of the best

"Tom still has the home-brew ethic: He does what he wants to do,. to the beer-geek community.


quit his own cozy job to go to brewing school. His five-year-old began turning a profit only this year.

Though distribution has expanded,production remains minuscule

"Someday, eventually, I'm sure He will go away,"
Click to expand...

Amazing what you can do when you get bored and find the delete button.!! :lol:
J

we NEVER go away