This story cropped up this morning from the NT.

Do any of you guys have personalised plates on your cars that are brewing related ?
A number of guys in the US who frequent skotrat.com have BREWRAT plates.

I thought about getting DRB33R a few years ago, but on the last check someone else had registered it.

Minister snookers CUE plate
By NIGEL ADLAM
11may05
A Government minister last night stepped in to ban a driver from having the numberplate FAR CUE.

Transport Minister Chris Burns ordered the car owner to return to Motor Vehicle Registry and get a new registration.

He had to use his powers of ministerial discretion to make the order.

``I don't want to be a spoilsport but I decided to ask the MVR to reconsider this numberplate,'' Dr Burns said.

``There is a system in place to deal with personalised plates that push the boundaries and it generally gets it right.''

She has seen the red four-wheel-drive carrying the plate twice in Darwin. ``It's revolting _ so aggressive,'' she said.

The vehicle is believed to be owned by a woman and her husband.

Ms Stripling, 57, of Rapid Creek, said the minister's decision was ``a good win'' for decency.

But she said the MVR's policy on personalised numberplates was inconsistent.

Ms Stripling said a Greek-Australian woman was stopped from having WOG.GIRL and a Palmerston man was banned from using his nickname BALLS.

``And yet they let through something that is obviously offensive,'' she said.

Mr Bradley said FAR.CUE did not fall under the three headings that prompted a review by a panel of MVR managers _ being sexually explicit, racially offensive or blasphemous.

``The two words in isolation are not offensive,'' he said.

Prospective numberplates are read backwards to check that they are not offensive in reverse.

Personalised numberplates cost $140 in the Territory, which makes them the cheapest in Australia.

i wanted f*ck the clp but its too long.
cant even have rsole

I know of one brew buddie who timed the purchase of a new car to coincide with 1ALE...

Not related to personalised plates - but...

I used to play in a touch footy comp conducted in the southern suburbs of Sydney (ahh the Shire... Gods country )
There was a team from Kurnell and they were called the FAR KURNELL'S
True story.

You do come across some ridiculous plates though, but then you look at the driver and it all makes sense (in my experience anyways).

EG. I've seen a newish SS Ute with "4JESUS" plates and the back of the car was almost dragging on the ground while the front was lifted about 6-8 inches with low profile tyres.

The other one i've seen a bit of is: "PERSIA" on a Z3 and from memory there was some fully sick doof doof blaring out, but it was quite a while since i last saw it.

I saw one at a tyre place the other day called CODGER. Other than that, most personal plates are weak as piss. The one that sticks in my memory is a ute back home with the plates RUNVUS. No, I'm not.

For a while around Adelaide there was a fancy Holden (can you tell I don't know my cars?), black with the plates NAZGUL. That was almost cool.

Alien boy said:
I'm waiting to see one that says FONT]pretentious wanker.[/
That about sums up personalised plates and their owners!

Mate had CUF00L on a very fast car, but yes, most of them are wanks.

There's one getting around Melbourne that's RUCNOK - my guess is that the owner is an optician.

I was mulling over this topic the other day, and I reckon there are a heap of good brewing plates a person could have. SPARGE and LAUTER for starters, KRAUSN if you don't mind some abbreviation. Then we could get into styles and have a DUBBEL and a TRIPEL, or a PORTER or a KOLSCH. Open it up to the ingredients and there's a whole 'nother world to explore, like FUGGLE, CASCAD, MUNICH, CARAFA, etc, etc. And the premium brewer's number plate? Well, that'd have to be WEESTU.

saw a funny one the other day - QUP2CY

I agree re puerile, stupid, waste of money etc

I had BUNYIP when we were living down south however after moving back up north I found that some NON Bunyip has taken the QLD one on me.... Hope we dont meet on the road

Hi all,
From memory, all the cars that are part of the Moortgat brewery fleet in Puurs, Belguim, have DUVEL-1, DUVEL-2 etc

There was a guy running around Perth for years in a Triumph Herald-------INPOOP.

For the w@nkers previously mentioned, I suggest TOSSER or UTOOL.

Guys at work stuffed around with a picture of my car :angry: 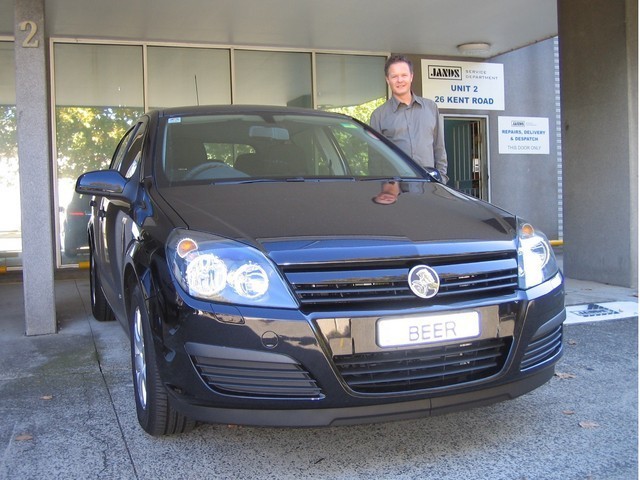 There's a husband & wife I saw a while back with HIS-1 & HER-1 but the one I always remember is a turbo Mitsubishi 10 or 12 years ago with IXLR8.

Kai said:
I was mulling over this topic the other day, and I reckon there are a heap of good brewing plates a person could have. SPARGE and LAUTER for starters, KRAUSN if you don't mind some abbreviation. Then we could get into styles and have a DUBBEL and a TRIPEL, or a PORTER or a KOLSCH. Open it up to the ingredients and there's a whole 'nother world to explore, like FUGGLE, CASCAD, MUNICH, CARAFA, etc, etc. And the premium brewer's number plate? Well, that'd have to be WEESTU.