Alcoa in the US have come up with Aluminum Bottles that keep beer cooler longer.
Unless you are in Darwin or the the tropics why would you need it ? My beer doesn't last 50 minutes

Beer fans nationwide chill to a Pittsburgh icon in a new aluminum package.

For the first time in North America, beer fans will be able to enjoy a nationally distributed beer packaged in this innovative format made with Alcoa aluminum.

Aluminum bottles give the Iron City brand higher visibility in a crowded, image-conscious market. They also give beer drinkers a new way to enjoy beer -- an unbreakable, resealable container that keeps beer colder longer than glass, according to Pittsburgh Brewing. And then there's the ultimate benefit, according to PBC vice chairman Joe Piccirilli: "the consumers we tested say they think it's cool."

It's no coincidence that this marketing breakthrough was the result of a collaboration between Pittsburgh Brewing and Alcoa. They share a history of packaging firsts, including the beer industry's first pull-tab can and the first twist-off resealable cap. In this case, the team included CCL Container in Hermitage, Pennsylvania, the company that makes the bottles from aluminum supplied by Alcoa. 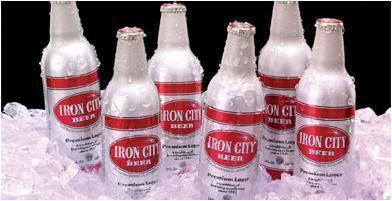 They are cool though.
It would have to taste pretty bad for those not to sell in a club.

yeah. Seems to be everyone is getting in on it though so maybe we will see them down here as a summer gimmick in the next few years.

Speaking of cold beverages, Tempra Technology has developed the I.C. Can, a "100% safe and environmentally friendly" aluminum can that uses a self-chilling process involving a cooling gel, desiccant, and heat sinks. They claim to be able to drop the temperature of the 10-ounces of beverage inside by 30 degrees Fahrenheit in three minutes. It's pretty cool tech, but I can't help but wonder if it's all a bit convoluted. That doesn't mean I don't want to try one; unfortunately, Tempra is still looking for a partner to actually put a branded beverage inside.

Tinny's are back - just like everything else from the 70's. I think I'll stick with glass bottles.

I would use those aluminium bottles for homebrew, the only downside would be the inability to see how the beer is clearing, but to not worry about breakages would be a big plus... would probably not be able to explode them either.

That must be a sandwiched aluminium bottle or something, for them to claim it insulates better than glass. I just looked up thermal conductivities (k), and glass is 1.05 W/mK, which aluminium is a whopping 235 or so. That means Aluminium conducts heat over 200 times more efffectively than glass. This explains why tinnies heat up adn cool down much quicker than glass, and why glass is better at holding the temperature of the liquid.

But...if they have a dual layer bottle with air (k=0.024) inbetween, I'd believe it. Or possibly some other coating that acts as an insulator. Something like water resistant paper (k=0.05), or PTFE (k=0.25) would work ok.

I was thinking something along those lines, bar, though I'm not enough of a clever dick to look up thermal conductivity values. The plastic Tooheys dry bottles use a layer of air between the plastic and they do a pretty good job of keeping the beer cool. Still crappy compared to glass, though.

Having a few of those bottles in your homebrew collection would be pretty sweet. I doubt the beer that comes in 'em tastes very good, though.
J

Tradeoff will be that if they keep it cool for ages then they will take ages to get cool ...

Must be something about new things

I want some
T

If you're wondering why the evaporator (cold bit) in your old fridge is made of aluminium it's because it's cheap(ish), flexible and an awesome conductor of heat. Therefore not a good insulator.

The alloy bottles would make an impression with the refs at the footy too!

I love tinnys Reminds me of uni drinking days

Looks like you might have to act quickly if you want to get some Iron City Alloy bottles.

PITTSBURGH (AP) Pittsburgh Brewing Co., the maker of Iron City Beer and a fixture of local life, filed for bankruptcy protection from creditors Wednesday after failing to pay $2.5 million in water and sewage bills.

Pittsburgh Brewing, which employs about 250 people, will continue to operate. It had defaulted on sewage treatment payments dating back to 1996 and had failed to pay current water and sewage bills charges totaling about $2.5 million, said Holly Parada, a spokeswoman for the Pittsburgh Water & Sewer Authority.

On Monday, the authority issued a notice threatening to cut off water service if the company's obligations weren't met by the end of the day Tuesday. The bankruptcy filing prevents the agency from terminating water service, Parada said.

Pittsburgh Brewing has struggled to survive in recent years amid a declining beer market and tougher competition. It took the unusual step of trying to win a government bailout of its pension plan before seeking bankruptcy and was awaiting a federal agency's decision on the matter.

The company, which also makes I.C. Light beer, had agreed with the water authority to pay off the charges in installments. After meeting some of its obligations, the company eventually fell behind in its payments.

"It was a buildup of some past debt, and even though the place is paying as it goes, it can't take on all the past debt on demand," company attorney Robert O. Lampl said.

The outstanding charges include about $2.3 million in unpaid sewage treatment bills from 1996 to 2004 and roughly $200,000 in water and sewage costs for this year, Parada said.

The water authority was handling the bills for the Allegheny County Sanitary Authority, or Alcosan. Pittsburgh Brewing had sued Alcosan, claiming it had been overcharged by $1.4 million for sewage treatment dating to 1996, but the suit was dropped after the company reached the agreement with the water authority.

What sort of irresponsible Utilities provider allows a customer to get $2.3M into debt.

My council adds interest onto any payment thats more than a day overdue, and sends out plenty of reminders.

I couldn't imagine it happening here...or could I?

I like the look of the bottles! Like Jayse said, they should sell in clubs... because of the 'ooh, shiny' appeal alone

ali bottles are old hat.there was a post on ahb ages ago about them

heres some old pics of the heinies