I don't mind a longneck of coopers sparkling and one of stout for a black & tan. Of those of you who drink them, what beers do you like to mix? I know some folks like to combine Guinness and Bass, but I don't think that'd really be my thing.

What about making one? I was contemplating making a couple slightly smaller extract batches, one of a nice ale and the other of a higher gravity stout, and racking one onto the other (or both into a third container if room permits). Does anyone here do black & tans, or do you reckon it's a waste of time?
P

i always partake of a black and tan or two at the footy. Mix of southwark stout and carlton draught. Its a tradition for me and my dad.

I used to do the 50/50 of Tooheys Old and Tooheys New.
Now I just go to pubs with better beer

I quite often will mix at the tap from two different kegs a light ale and a dark ale.

ive never heard of this before, is it an old-timer thing? as im only 20, i might be too know anything about this, but i might use this to get through my stout whichi i did up. I put too much water into it (went up to 23L instead of 18L) so its extremly watery. I havnt tried it yet.

Many years ago, in a land far far away, I used to drink black and tans of Guinness and keg Scottish beers like Youngers Special or McEwan's Export - mainly in pubs that didn't have a decent cask 80/-, or sometimes Guinness and Newcastle Brown.

Was definitely a mix of stout and ale though, not lager. A good contemporary take on the old world variety might be Coopers or Southwark Stout and James Squire's Amber Ale.

Here's the full list, found this in Roger Protz's Ultimate Encyclopedia of Beer;

Found this on mixing beers and other stuff with beer.

THE MIX: CONCOCTIONS WITH BEER.
The notorious beer drinkers, the Germans and the English, love to concoct mixtures of beer and whatever. The famous English Black and Tan is well-known in this country, while the Shandy (from England) and Radler (from southern Germany) are less-known. Both of these are a combination of beer in the generic, and lemon-lime soda, actually "Zitronenlimonade" in German. Besides the Radler which is now commercially available in Germany from well over a hundred breweries, many other combinations have emerged in the past decades, initially in the Gasthuser, but a number are also now commercially available. These mixes generally produce a drink with less alcohol, generally between 2.4 and 2.6 % alcohol by volume, and a few are even lower in calories. Interestingly these mixes have replaced the "Schankbier" (light beer) fad, possibly since they have more flavor.

***other mixtures with Berliner Weisse, as found in Thringen***

the Heller Moritz - Hefeweizen, with a small bottle (piccolo) of champagne and a slice of lemon

the Alster, or Alsterwasser - 1/2 Pilsner lager, and 1/2 lemon-line soda (virtually the Radler with a north-German name.)

IV. You name it

And now for the absolute latest, a Whizz Peach, but not a peachy whizz, - listed from a private brewery in Darmstadt,

For the total non-alcoholic drinker, a Spezi (1/2 lemon-lime, 1/2 cola) is not only traditional throughout Germany, but also extremely popular, generally for the kids, although there is one which is listed as "Alcoholfrei und Kalorienarm" (alcohol free and low in calories).

Many of these "mixes" are served in 1/2 liter glasses, but one time-honored tradition for the Bavarians is to congregate in their local Gasthaus after church on Sunday for their Mass (1 liter of beer and no pun intended) which invariably is accompanied with a "shot" ( Enzian, Obstler, etc), or possibly a Laterndl, a Mass with cherry liquor in a shot glass, which is in the bottom of the stein. Figure that one out!

Been mixing a little tonight.

Found a great combination. Weizen and Mango juice.
My weisse is on tap at the moment and tastes pretty good. But add a dash of mango juice in as well and it is a great summer quenching drop.
Got the idea from Lowenbrau Keller in Sydney who offer a German wheat beer with mango.

Bit more experimenting tonight.
Imperial Pils vs Breakfast of Champions Stout.
Bit of seperation from the pour but tastes fantastic. 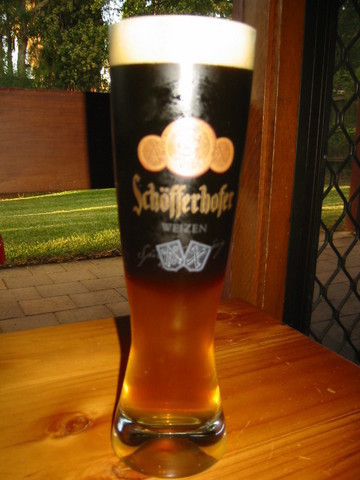 or "Devils Duck" as we called it

I have both a dry Irish stout and a Belgian dubbel on tap at the moment and I have gone a half and half of those with great results. The roast coffee flavours of the stout really compliment the funky flavours of the Belgian yeast.

tested this using my Weizen at my mate's breakfast 'n' beer Superbowl party.

I could easily move to Germany, where this sort of thing is tolerated or even encouraged.

Thanks for these recipes. Will definitely try the berliner weisse mit blau Curacao, when my Berliner comes in.