Marijuana plants are shown growing in a beer vat at the old Molson brewery in this police handout photograph January 12, 2004.

Police busted the grow operation, the largest in Canadian history on the weekend.

Nine men have been arrested in connection with the operation which made use of a former brewery. Thirty thousand marijuana plants were found in the bust. 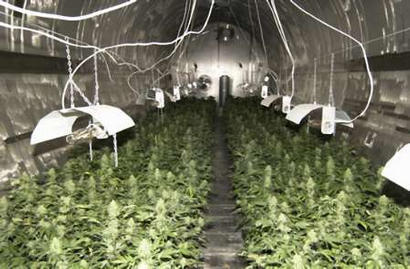 that is a lot of marijuana!! coincidentally, a prison worker was found to be growing marijuana at a prison farm in tassie. not a good way to get ahead as he was fired and arrested. at least he knows the place well.
joe
B

They should have left all the crops in there, then brewed some beer with it in. I could bet that would be the worlds most popular beer!!!!!

better than squatters moving in

Too expensive for brewing those 'hops'

How much beer do you reckon that vat would hold? You could float an oil tanker in there!
W

On that same subject, there was a huge bust here in Adelaide on the weekend.
Police found 500 plants in a house which was on the same street that jayse lived on until a few weeks ago. Livingstone Ave. Know I know where he got the name for his SKUNK Fart Pale Ale!!!! :lol: