Brewday and what is everyone brewing currently?

Currently fermenting a Robinsons Old Tom clone. Recipe is from Graham Wheeler's Brew Your Own British Real Ale. This is maybe the third or fourth go at this one and so far they have all been very good except I haven't been able to hit the final gravity. Aim for 1.017 and the current batch is all but finished at 1.011. I think it may drop a little lower. I used Nottingham yeast and it smashed it from 1.064 in a little over two days!

Got a simple Pale Ale fermenting at the moment, but I also did a 2nd sparge and collected 11L of 1.013 wort. After boil I got 8L of 1.015 that I'm fermenting in a PET keg. Didn't bother with an airlock. Had a taste yesterday and its not too bad! Bit watery as expected but should be better when cold and fully carbed. Should end up around 1.3% ABV.

Doing my first sour beer, a raspberry sour with philly sour yeast .Should be ready to go into the 2nd FV with the raspberries in a few days.
N

Got a blonde ale in the fermenter about to be dry hopped and making an AG ginger beer on the weekend and next weekend taking a stab at an english ale. Know it won't be proper due to the yeast needing to be suitable for bottling but have a mate who is dead keen on it.

Snap! I’m doing a Cherry Sour using the Philly yeast, it seemed to take about 48hrs to start fermenting but it got there in the end. Currently at 1.008 after being on 4.5kg of cheerries for the last 7 days. I think I’ll give it another 5 days before crashing and kegging.

Also have an Idaho7 IPA just crashing now, a Grapefruit Mamalade & Cascade Pale Ale about to crash and a hoppy pale ale which is sitting on 20c waiting for me to decide what dry hops to use (probably Amarillo, Columbus & Citra).

Doing a Belgian Blonde Ale on Monday to refill the Idaho7 fermentor. 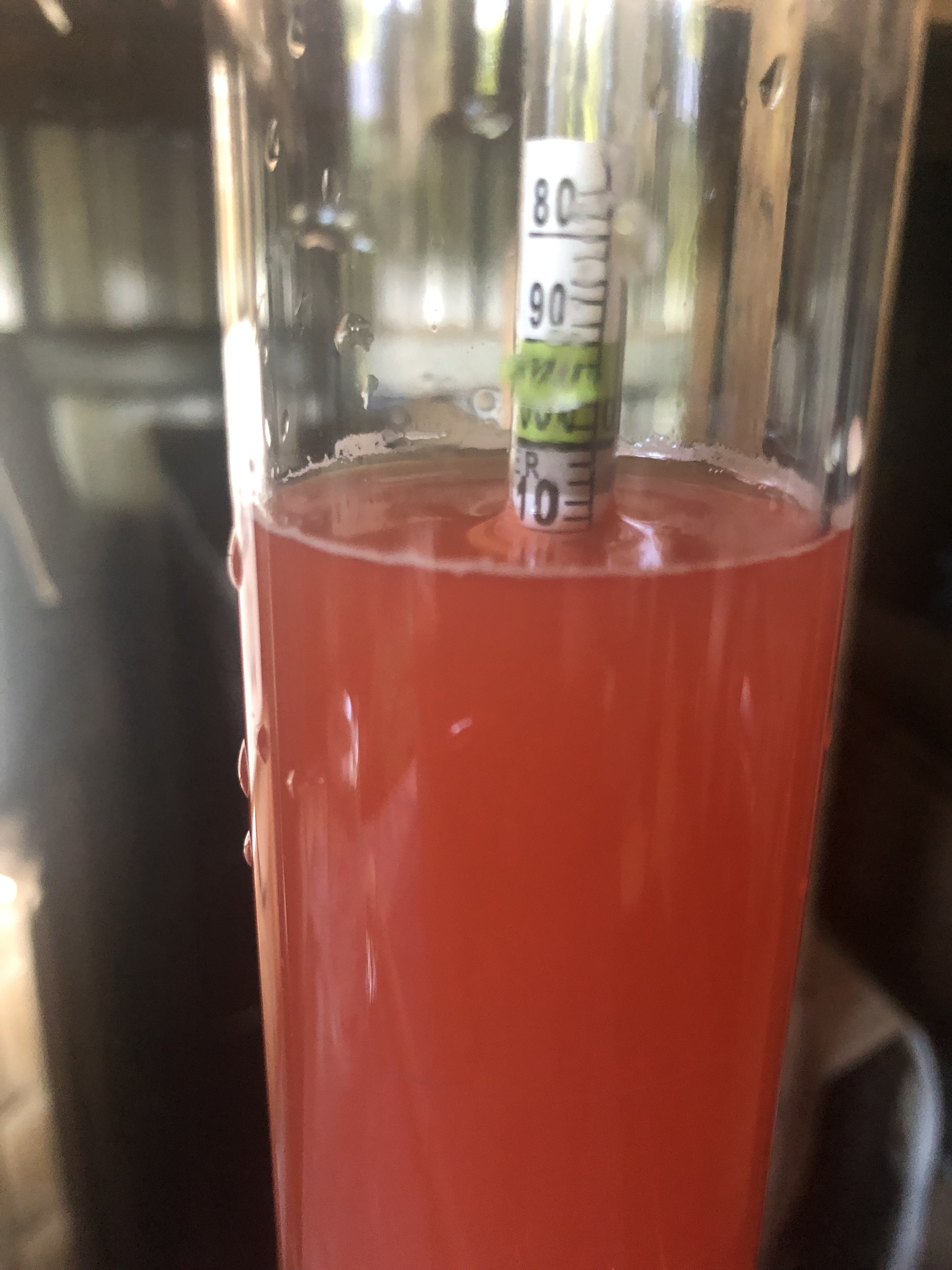 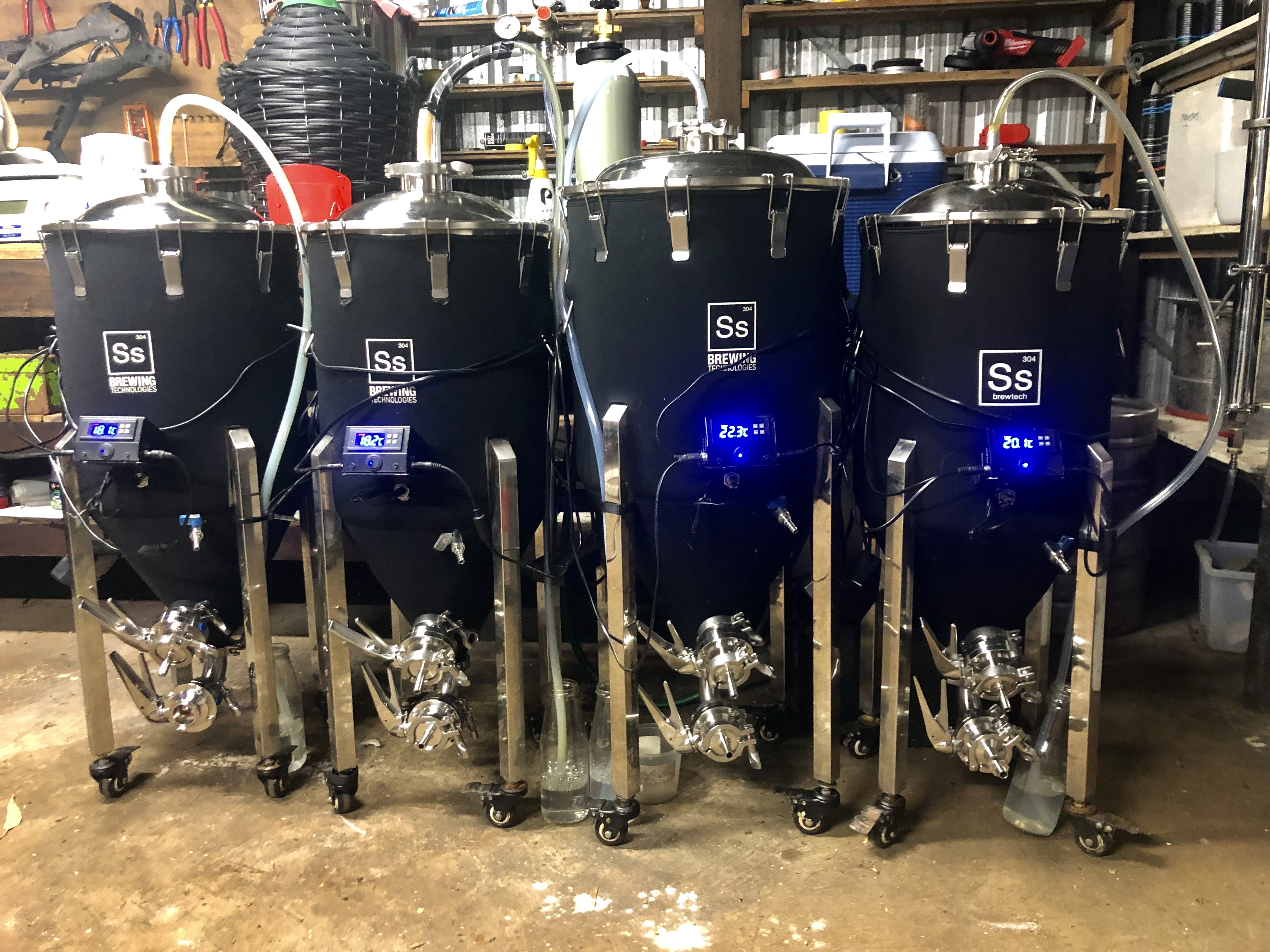 Got a Belgian Saison in the fermenter.
Yeasties are about halfway through I reckon.
D

just finished a mystery wheat. Whats a mystery wheat you ask? When I bought my home, i made a deal with the previous owner to buy all the brewery equipment, kegs, bottles grains, hops freezers etc as-is, basically a walk-in walk-out home brewery deal. In the freezer was 5 bags of milled grain, with unknown grain mixes. Some had reaonable labels, some dont, and 1 is just a smudge. Last weekend I decided to play roulette, and pulled out the bag labeled "wheat", grabbed some T-58 (2 years expired) and a pack of Amarillo for my hops.

The morning of brew day I made a quick sugar water starter and pitched 2 packs of T58 to see if the yeast was viable... the yeast said a resounding hell-ya, lets go. So the brew day began. 5 hours later 25 L of mystery wheat headed into the conical, and the 1L of starter was added, the fridge temp was set, and awwway we went.

A few hours later, I looked in on the conical, and there was a massive krausen on top and the spunding valve sounded like a rocket on the verge of exploding. I dialed down to 4-5 psi, and said good night. The next morning I checked the RAPT portal and saw the beer was about 6 degrees above the fridge set point, and I way warmer than I wanted, almost 26c. So I dialed up more cooling, and headed to work. Got home checked on things, and found I over cooled the beer to 15c, so i bumped the temp up a bit. A gravity check showed the beer at 1.015 vs an OG of 1.053. The heck? Had this beer really nearly fully fermented in 24 hours? Over the next 5 days it dropped 0.006 more points. On Friday I started the chill to serving temp, and put it under 25 PSI to carbonate it up.

Invited a mate over for Saturday arvo beers, and he pronounced it a darn nice drinking beer, and said he was feeling it after one pint. I think it needs a bit more carbonation, but thats an easy fix. Flavors are ok, but mild for T58 yeast, its more American wheat than a German weissbier. I suspect the very rapid fermentation, and poorly controlled temps didn't let the yeast character develop properly. I've not done another gravity measurement, but the RAPT pill is reporting 6.3% ABV, and from how it hits, I can believe it is at least 6%.

So for a bit of random unknown, old ingredients on a brand new to me brewing system, I think its a heck of a first run on the new kit. I wasn't going to be surprised if this batch turned out to be a dump beer.

I've got a bunch of fresh ingredients headed my way for some other planned batches, so more to come. And there are at least 4 more mystery beers to brew.

Chookherder, if that's really your set up, and I don't doubt it, you have a hellavu nice brewery. Jealous? You bet!

42 lts of German Pils, just about to pitch the yeast.
P

Just kegged up a k&k amber ale going down a treat. Came out of a pressure fermenter so ready to go. Just chucked on a morgans German wheat beer with the malt tin as well. See how it goes.
H

razz said:
42 lts of German Pils, just about to pitch the yeast.
Click to expand...

Hey razz nice one. I have 45lt of Heff, 23lt of Belgian pale in a cube and 23lt of pale hopped with Victoria flowers both waiting on the sideline for fermenting. 23lt of Heff is for the 50th anniversary of Melbourne Brewers club dinner.
H

Just got a couple of mid strength XXXX Gold clones int cubes today for my mega swill drinking mates who reckon it doiesn't give them the headaches that that the commercial stuff does when they have a big night on them - go figure.
W

Have a Gose fermenting now with Lithuanian Simonaitis and 1/2 a kg each of Mango and Pineapple once the souring finished. Being a farmhouse yeast the fridge smells like a barn yard. Another 8 days to go before doing a bittering hop tea of Nectaron and then kegging. Looking forward to tasting late October.

First taste and i like it, not bum clenching sour but a subtle sourness.
A nice summer quaffer i think.

Hangover68 said:
First taste and i like it, not bum clenching sour but a subtle sourness.
A nice summer quaffer i think.
Click to expand...

The low light doesn't do it justice.