Gday all,
First time here. I never knew there were that many talented brewers out there.
Question: How do I make a 12v power supply for two mash stirrers? Yes, you guessed it.. I want to brew my usual 60-litre batch at the same time as a 20 or 40-litre experimental or strong ale batch. At the moment I can only do one brew at the time. I currently use an 8-amp car charger through a simmer stat from an urn to run the wiper motor. At the long rest I set the simmer stat to kick in the stirrer for 3 or 4 turns every minute or so. Its very gentle to the mash and I can keep the temp within 1 degree over 90 min.
My problems would be solved if I could get a 12v simmer stat. I read about the pc power supply but Ill properly need one for each stirrer & can they be joined up to make 24v for a grain mill?

I wouldn't recommend ganging two PC power supplies to try to get 24 volts. I suspect one side of the 12V will be ground.

It wouldn't be this Hans from Emerald would it:

Not sure what the current rating is. But how about the 12V transformers which come with downlights? You see them for $15 or so on special. 2 of those in series will give you the 24V you need. If they arent large enough, try electrical wholesalers and see what they have in the way of larger transformers, like the ones people use for running huge amounts of garden lights. Would be a far more simple approach then using pc power supplies, and not overly expensive if the light tx's work.

Hi Hans, I'm currently using a 12V wiper motor to run my Barley Crusher grain mill. I've posted about this before, which is probably the thread about the computer power supply that you read. Well I was using a small battery charger (had a 5amp fuse) initially and while it worked ok I used to blow a fuse every now and then when the motor loaded up a bit too much.

I was going to use the computer power supply but ended up finding another battery charger with a 10amp fuse for $13 so I thought I'd give that a go before trying the comp power supply. Well, it works flawlessly now. Did two batches on Sunday and crushed 10+kilos of grain including wheat and had no problems. I now have a fully hands free motorised grain mill . Depending what mill you use a 12V wiper motor should be enough to crush your grain if you have a power supply with enough grunt to run it.

As for the mash stirrer (which is probably unnecessary really IMO, but hey), you could try using a 12V DC motor speed controller (Jaycar has them as a kit) and then just use some 12V power packs (or battery chargers). You should be able to run your stirrers on small battery chargers as there isn't going to be anywhere near the load on them stirring a mash compared to crushing grain (I guess that depends on how big your blades are though), a cheap battery charger should run you no more than $10-12 from Supercheap.

No Sosman, Its my twin brother. You wouldnt catch me without a glass of beer in my hand! Looks like its from the clubs stein beer bush camp.


Maybe I should just do what JA is doing, using a 12v light transformer & a 5 buck ac-dc rectifier from Dick Smith.

The mash stirrer is a nice luxury though. At mash-in it will do the hard labour & I have it running all the time when raising the temp between rests and to mash out temp, all you have to do is sit back and watch the temperature gauge & down a few ales. 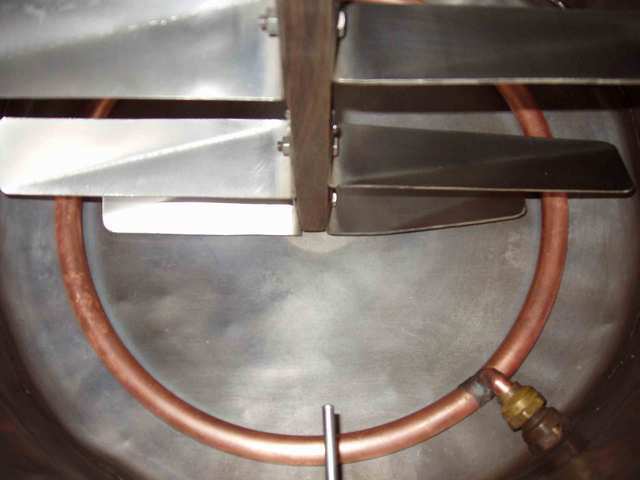 Try wrapping some bubble wrap around that mash tun, will help keep the temperature stable.
W

Hans, slow speed. I haven't tried crushing on the faster speed yet as I didn't have a spare 10amp fuse so I didn't want to risk it on brew day. I will experiment though. It takes a while on the slow speed but I just fill the hopper and walk away and keep setting up my other gear, check temps etc. Gives me a great crush too, much better than with the drill.

for power supplies, check out
www.detechonline.com
there and australian company and i think you can get there stuff at camping and outdoor stores in aust. i have one of their 12/24v power supplies and is really good. not sure whether its what you need or not.

Hans,
I have an old pc power supply i checked out today, and its 12V is isolated from ground meaning it can be hooked up with another pc supply to give 24V with no probs.
I dont know for certain if all pc supplys are the same, but its very easy to check if your not sure.

I'd go the pc supply over the downlight transformers any day. The downlight tranformers are only rated at about 50W which is roughly 4 Amps. If connect 2 together to produce 24V, you still only get 4 Amps not 8. You could connect 4 transformers up to get 24V 8 A, but by then its getting expensive. Besides this, you would also have to connect a decent sized rectifer to the output to turn it into DC.

Forget it, you can pickup a couple of 2nd hand pc supplys for less than $10 and you'll have 20 amps plus on tap.

Someone on rec.crafts.brewing posted this link with pics and explanation re using a PC power supply and windscreen motor for a grain mill.