So Christmas has come and gone, and in a scenario probably familiar to many of you, Ive ended up with about a cartons worth of assorted mega-swill that friends have generously left me after drinking some of my beer. Now, I have no real desire to partake in it, and it seems awfully wasteful to throw it out, so it is just basically taking up fridge space until someone comes along who would rather drink it than a house brew. But, in another scenario probably familiar to you all, there is never enough fridge space. The age old fridge dilemma.

But I was at a micro the other day, and speaking to a brewer there. And he said (amongst many other interesting things) something that piqued my interest, because while I wouldnt describe myself as inherently lazy, if there are good ways to cut down the time it takes for a brew, Im open to suggestions.

It involved yeast starters. Rather than boiling up malt to a nominated OG, cooling it, etc, said brewer just takes some cans of swill at correct pitching temps, pours them into flask/demi and pitches the yeast. His thoughts were that the swill is for all intents and purposes sterile by the time it comes out of the mega-breweries, so there should be no infection issues, and its pretty easy to work out what your OG is going to be.

And as we know from taste experience, there certainly arent any strong malt, hop or yeast flavours in the swill that are likely to overpower your brew

Anyway, I couldnt see any major flaws in the logic, and it seems like a good way to get rid of assorted swill. Im going to give it a bash anyway!

I would have thought that since the beer had already been fermented that there would be nothing left for the yeasties to eat... so somewhat useless as a starter. Also possibly some risk of killing your yeast if there are some preservatives in the brew???

Thats what I was thinking too dreamboat.
B

said brewer just takes some cans of swill at correct pitching temps, pours them into flask/demi and pitches the yeast. His thoughts were that the swill is for all intents and purposes sterile by the time it comes out of the mega-breweries, so there should be no infection issues, and its pretty easy to work out what your OG is going to be.
Click to expand...

Presumably if you are pitching into a can of XXXX/VB whatever, the OG is going to be 1000? Has anyone got any spare cans to drop a hyrometer in to check? (Don't worry, you can sanitise it again before putting in real beer

If this is the case, then surely as Morry & Dreamboat have said, there isn't much if anything for the yeast to eat. Let alone any other crap that may be in there.

But the big questions are , which (Freo-based?) micro is doing this, and why do they have spare cans of swill lying around ?
T

Heres another use----Doorstop!. The sea breeze screamed in slamming the door of the poolroom. That was six weeks ago. I guess I should keep an eye on the use by date then throw them out.
I am not biased, I did try one when the donor presented them.
After Christmas, I ended up with 60 odd containers of different beers and I find that if you mix them 50/50 with a shot from the keg they are quite palatable and because they are generally bland, they dont hurt the taste of real beer too much. 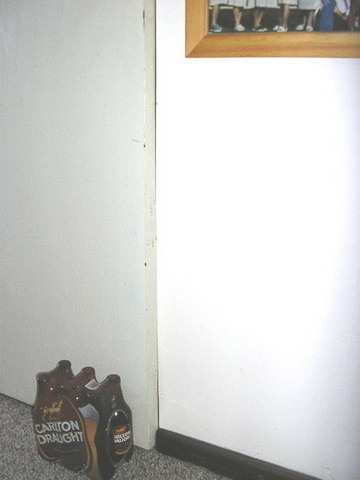