Want To Grow A Large Pumpkin ?

Want to grow a large pumpkin ? Feed it beer.

Giant pumpkin thrives on the Vine

Terry Walton fed the pumpkin beer to help it grow .
It needed a firemen's lift - and three policemen besides - to move a giant pumpkin grown by BBC Radio 2 gardener Terry Walton.
The emergency services were happy to help shift the vegetable grown on the Rhondda allotment adopted by the Jeremy Vine Show.

Mr Walton, who fed the plant three pints of beer daily, has donated it to a local special school to raise funds.

Millions of listeners have followed the progress of the pumpkin.

Mr Walton explained: "I planted the pumpkin seed in April and have been feeding it beer to help it grow.

"And it is the biggest pumpkin I have ever grown."

Mr Walton, who reports the progress of his allotment on a monthly spot on The Jeremy Vine Show, said that feeding the pumpkin beer slops from his local pub The Barn was the secret to its growth.

Pupils at Ysgol Hen Felin in Ystrad - a school for children with disabilities - which is near the allotment in Llwynypia, have been given the pumpkin to use as a way of raising funds to buy equipment.

The pumpkin dominated the allotment

Mr Walton decided to hand over the pumpkin to the school after community safety police officer Jim Sullivan told him that they needed to raise 5,000 for a guided mobility system to be installed.

"I was up here one day and Jim was here too because he is helping the school take on an allotment.

"He saw the pumpkin and asked me what I was going to do with it and said he would take it off my hands to help raise money for the school," he said.

But the size of the vegetable meant that a co-ordinated effort was needed to move it from the allotment to the school.

Pc Jim Sullivan contacted Tonypandy fire station for help and with three firefighters and three police officers lifting, the pumpkin was eventually moved from its patch.

A special hoist was needed to weigh the pumpkin

It was taken to nearby Llwynypia Hospital first so staff using a special hoist weighed the pumpkin, so that the school could run a guess the weight competition as a way of raising money, before being taken to the school.

"If anyone wants to enter, all they have to do is send a a donation cheque to the school with their guess and contact details written on the back," said Pc Sullivan.

Head teacher of the 120-pupil school, Andy Henderson said that the rest of the pumpkin would be used to make pies and a make a jack'o lantern. 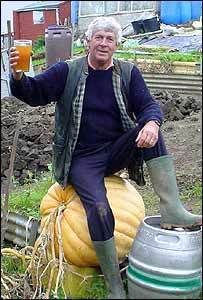 homebrew.com has recipes for pumpkin ale if ya interested <_< :blink:
only in america

Pumkin ale made from a beer feed pumkin sounds great.
Most of the homebrew.com forum users have said there favourite pumkin ales are the ones that you leave out the pumkin and just use the pumkin spices though.

Apparantly you can't actually really taste the pumkin any way just the spices in a pumkin ale.

Maybe i should feed some beer to some 'adelaide' hops.