Since there aren't any reviews from S.A yet i'll start here.
If what you expect in a bar is a few T.V's, a room with pokies, VB and the T.A.B then you'll be wasting your time going to the wheatsheaf.
If however you want a place with none of those things coupled with a awesome range of beer, large beer garden and fire places and what not then this is the place to be.
During the week you ussaully have to take care not to get hit in the head with a spear(dart) on the way to the dunnies and come weekends the back room is alive with original music...some of it is so original its just down right strange :blink: .
When you go into most places these days they are cluttered to the brim with allsorts of things from useless irish historic pieces or fancy modern ugly looking crap.
The wheay is pretty bare and the only thing they have decorated with is a few paintings of girls cuddling. :huh:
They don't have a kitchen either but you'll see pizza delivery guys rocking up all nite long.
So if your after food you can get anything delivered that you like from where ever you like.

The beer is what its all about for me but they also have a good range of single malts and wine i beleive.
They have a extensive list of the very best bottled beers, none of the lists of euro swills you see at most places that claim to have a good range of beers. At the wheaty its stuff ranging from emersons to samuel smiths and the like.

All the little creatures beers are on tap as are the MSB beers. You won't found a aussie draught of any kind, generally for people who are after such beers they serve the LC pilsner. I pressume they have the coopers full range but who doesn't these days in S.A?

So if your wondering were you should be heading to on your next nite out then wonder no longer.
Check out George st Thebarton and say hi to Jade, emily and liz.

They do have plans which don't seem to much like delusions of granduer to me in that they aim to have a kitchen and even brewery there oneday.

"Hidden behind the 1970's facade, there's a very old Wheatsheaf Hotel there. It was first licensed in 1854. Wheatsheaf's and hay for horses was what the district was all about last century. " 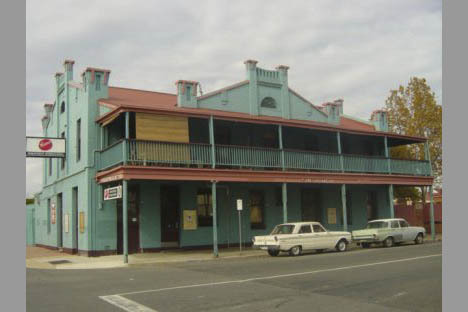 I finally got around to looking up where in thebarton george street is. turns out it's a short weave from a friend's place. excellent.

jayse said:
The beer is what its all about for me but they also have a good range of single malts and wine i beleive.

I've managed to avoid the wheaty until now, but resistance is crumbling.
B

I had the pleasure of spending a couple of hours there on a saturday arvo with my wife the other week. A mixed crowd of just the right numbers to give it atmosphere without at all feeling crowded.

Friendly staff, and great range as Jayse said. It is so close to the city there is no excuse not heading down for a pint of LCPA.

You croweaters have pubs that look like that close to the City? All ours are full of poker machines, wankers and have rendered facades.

I'm packing the tribe and heading your way! :super:

I just voted for the Wheatsheaf last night as my West Middlesex CAMRA pub of the year.

The Wheatsheaf in Ealing W5 that is!

Unfortunately it sounds like your Wheatsheaf has a much better range, but lacks well kept casks

jayse said:
The wheay is pretty bare and the only thing they have decorated with is a few paintings of girls cuddling. :huh:

Another great pub in Adelaide, fantastic beers on tap and no crap megaswill

Great bar chick too (can't remember her name) but she has a great passion for beer.
Again thanks Jayse for the guided tour of Adelaide and it's HB sights.

Hoops said:
: Great bar chick too (can't remember her name) but she has a great passion for beer.

I have a nick name for her thanx to TDH, he mentioned she wears kmart bras so its.......actually i better not go there! :lol:

Nice pic by the way hoops. See i wasn't lying its wall to wall paintings of box biters.
B

I've been meaning to try the LCPA on tap for a while and finally managed to drop in to the Wheatsheaf yesterday.
On tap they also had the LC Pilsener, James Squires Porter and IPA (much better on tap than out of the bottle IMHO) and Mountain Goat IPA (BONUS!!!)
Outstanding array of bottled beers to back up those on tap, dart board, band in the "tin shed" out the back and not a pokie in sight.
Fantastic pub. One for beer and pub lovers.
Just make sure you have an exit strategy. I didn't and I'm paying for it today... but still smiling.

Bilph said:
Just make sure you have an exit strategy. I didn't and I'm paying for it today... but still smiling.

My last big night there ended up quite messy and with me missing work the next day. Bad for me was that they were taking photos for Rip It Up magazine on the night, which gets delivered to my work place. So I spent the next week wondering if I was going to get busted. Fortunately I'm far too ugly for my photo to be published so I got away with it.
M

Finally got to this great pub for a couple of lunchtime brews 2day. :chug:

Took a workmate with me and introduced him to the LC range.

Had a great chat with Jade( that is one serious beer lovin chick).
Prolly preachin to the converted,but if you live/work in Adelaide,get down there for a look and a taster.
It seems I've developed a taste for Rogers beer :beerbang:

Brauluver said:
Had a great chat with Jade( that is one serious beer lovin chick).

Jade is great. She really knows the single malts too if you are into them. She is even still nice to us after the adventures of some brewers in her pub.

I have apologised, already!

And I am determined to be on my best behaviour next Friday when the creatures come out to play.

try asking the chicks at the General Havealook what malts are in the beers......

Dropped in for a few on Saturday arvo.

THE DRUNK ARAB said:
Dropped in for a few on Saturday arvo.

I didn't used to think much of the Goat IPA, only had it from a bottle. Allways preffered the JS IPA, which is also on tap at the Wheatie. However, last time I had it off the tap at the wheatie I was converted. It is not really a traditional IPA but it's bloody good. I'm reasonably certain it's made with pils malt. The esters and the bitterness play together just right.

Jade said they couldn't get the organic malt for the IPA that they usually use, so they used organic pilsner malt instead.
Good beer buds on you Aaron.

I would like to think I would have picked it anyway. However, I read it on their web site.
J