Sydney Swans On Beer Can

From the herald sun this morning.

A HARD-earned thirst needs a big cold beer -- and Carlton Draught have decided that new premiers the Sydney Swans have earned their very own can.

The commemorative beer can features a team photo of the 2005 AFL premiers, as well as the Grand Final's final score.
Barry Round, the first player to captain the Swans after the team moved from South Melbourne to Sydney, was happy to drink to the win.

After 72 years without a flag, the team at Foster's Australia is predicting the cans will be in demand.

The commemorative cans are available from participating outlets in Victoria and New South Wales, and are available for four weeks, or until stocks sell out. 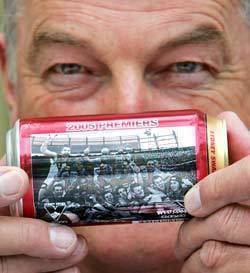